Sam "Initia1ise" Hapgood
Published: Oct 30th, 2020, 21:45
Genshin Impact’s latest has been announced! That means new playable characters, more areas to explore, a continuation to the story (what does happen with the Geo Archon?) and some intense looking fights await! It’s nearly here! Players who have been spinning their wheels waiting for the next major content update can breathe a sigh of relief that Genshin Impact’s 1.1 version will release on the 11th of November.

It looks to be a fairly hefty one, so here’s what we know…

Four new playable characters will be joining the roster
First among those will be Zhongli, the wealthy if monetarily unaware proprietor of the Liyue funeral house who has been helping the Traveller with arrangements for the apparently deceased Geo Archon. He will be a 5* Geo-Polearm user with unique attack animations compared to Xiangling, dashing, kicking and driving his spear into the ground to devastating effect. Check out his Elemental Burst, too - giant meteor, anyone? 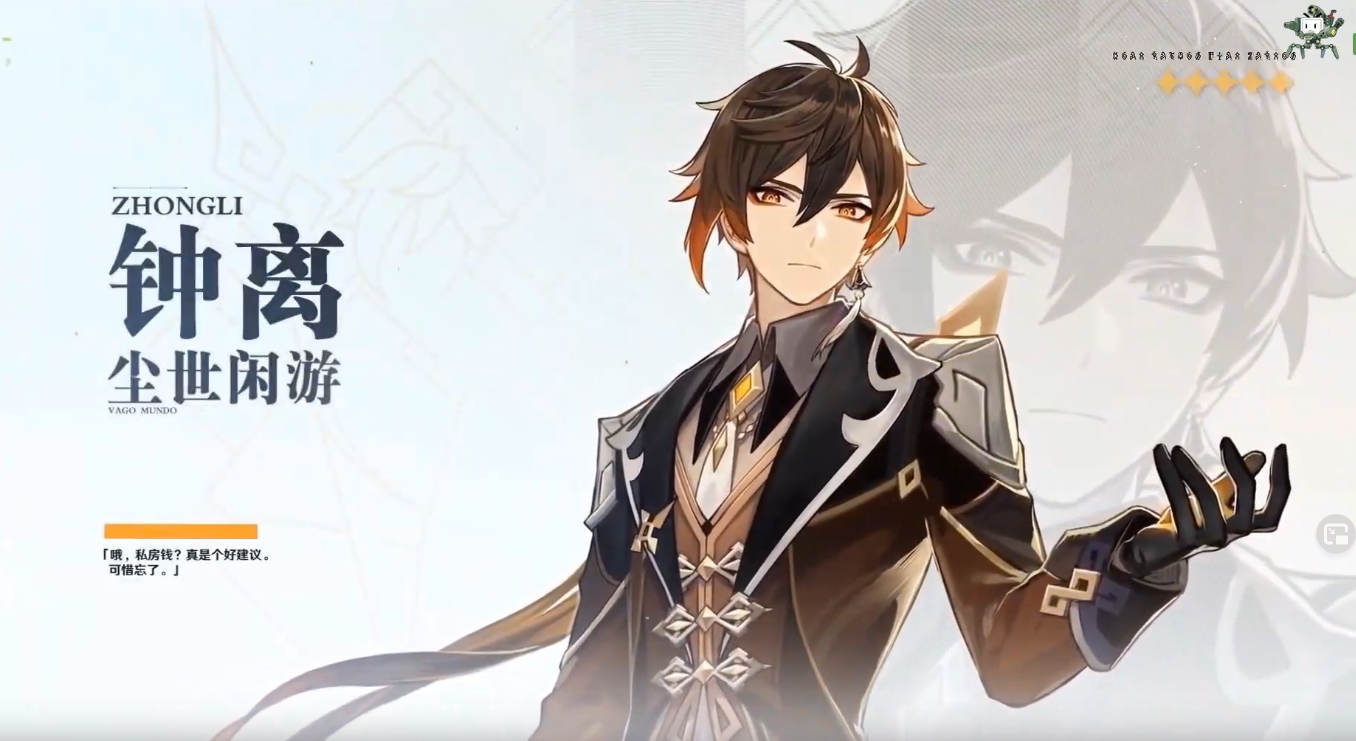 Second 5* character on the list will be another “ally” from your time in Liyue, the ever-sly Childe, one of the notorious Harbingers of the Fatui. He’s set to be remarkably unique in his playstyle. Nominally a Hydro-bow user, Childe’s Elemental Skill switches him to being a a dagger and polearm user while his Elemental Burst varies by whether he’s melee or ranged - a playstyle that’s as duplicitous as his personality. Rumour also has it he might be a boss-fight somewhere along in the story... 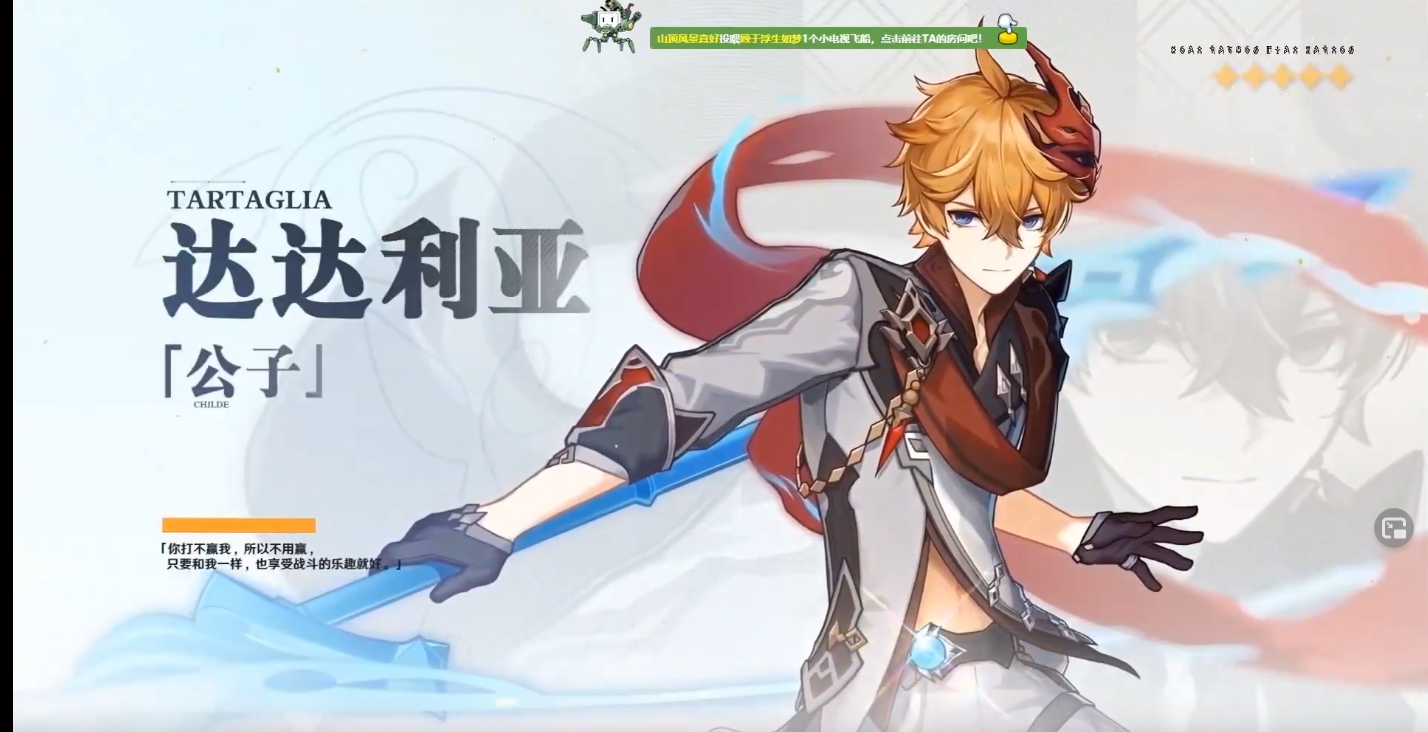 The last two characters are the 4* Pyro-claymore user Xinyan and the Cryo-bow user Diona. Xinyan is a pyrotechnic wielding rockstar that’s been taking Liyue by storm, using her axe-guitar as… well, an axe with her Elemental Skill, while her Elemental Burst hits foes with a wall of sound. Rock on.

Diona on the other-hand is the much beloved mascot and waitress at the Cat’s Tail tavern in Mondstadt who seems to take issue with rival tavern entrepreneur Diluc. She has an icy molotov cocktail for an Elemental Burst (fitting for bar staff) that heals allies and damages enemies while her Elemental Skill seems to provide some kind of cat-themed shield.

A massive narrative update that will finish up the Liyue storyline

Genshin Impact’s main quest has been left on something of a cliffhanger - the Geo Archon appears to have been assassinated by unknown forces, the Fatui have something planned, and the ruling Qixing seem to be attempting to cover it all up. Oh, and their leader Ningguang has just invited you up to the Jade Chamber - a giant floating island above the lands of Liyue…

That’s where the story is set to take off from, and trouble is certainly brewing if the trailer is anything to go by. Ancient enemies once kept in check by the Geo Archon are using this time to strike, and it will be up to the traveller and companions to halt the oncoming threats. Brace yourself for titanic water hydras... 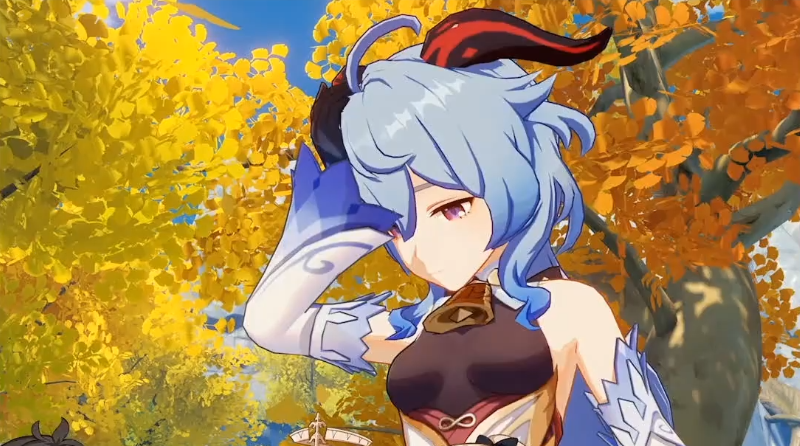 Expect an antagonistic Childe, and Keqing, Xiao and new character Ganyu to take center stage in the story alongside the likes of Ningguang according to a translated megathread from the Chinese announcement stream.

Your actions in Mondstadt and Liyue now matter more than ever. Exploring, completing quests and requests, and turning in bounties will raise your Reputation level in the given locale, earning a whole new set of rewards including merchant discounts and something called “Mining Outcrop Search.” 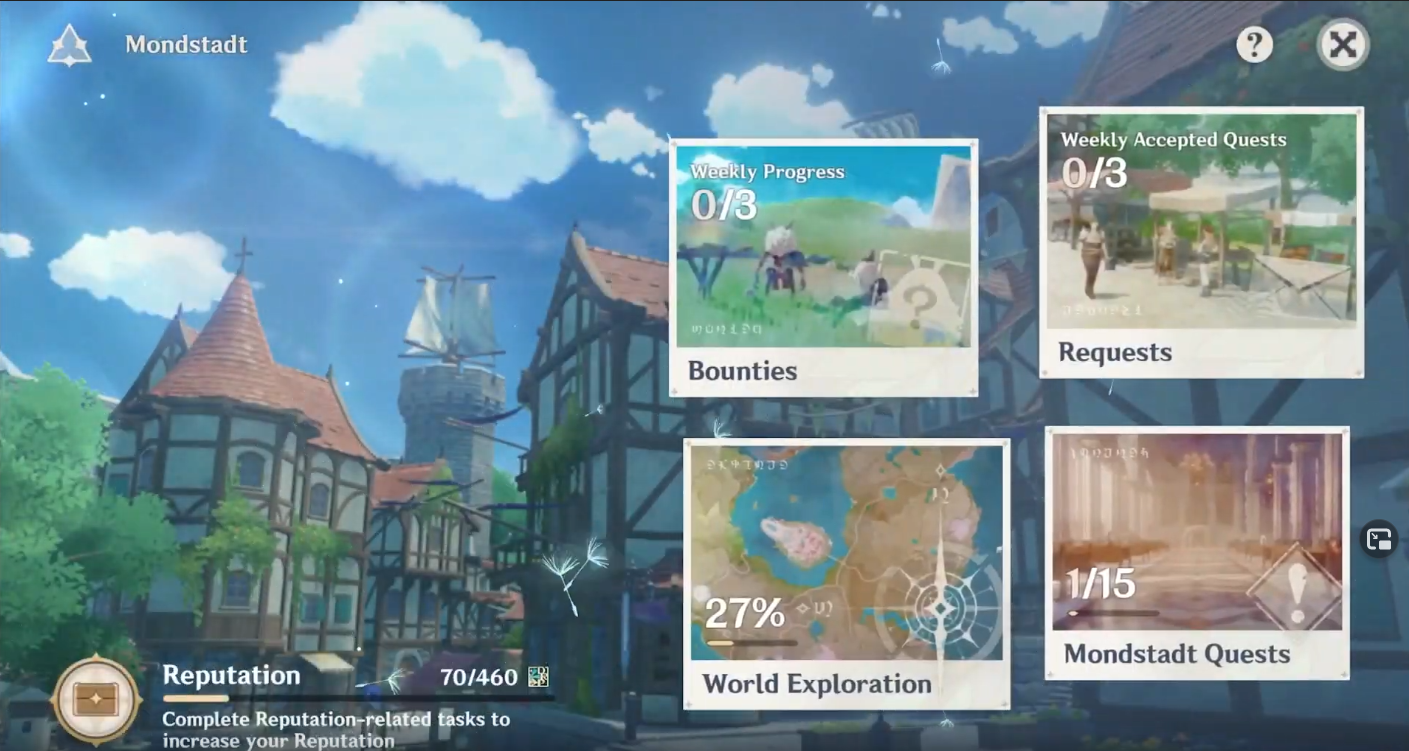 New area(s), items and an increase in Resin!

Some other changes and additions of note include a new area (likely the Golden Palace/Jade Pavilion), some QoL items like a Portable Teleporter, an Anemo Bottle for collecting whisps (say goodbye to constantly switching the Traveller between Anemo and Geo), and items designed to help you hunt down those elusive Anemoculus and Geoculus. 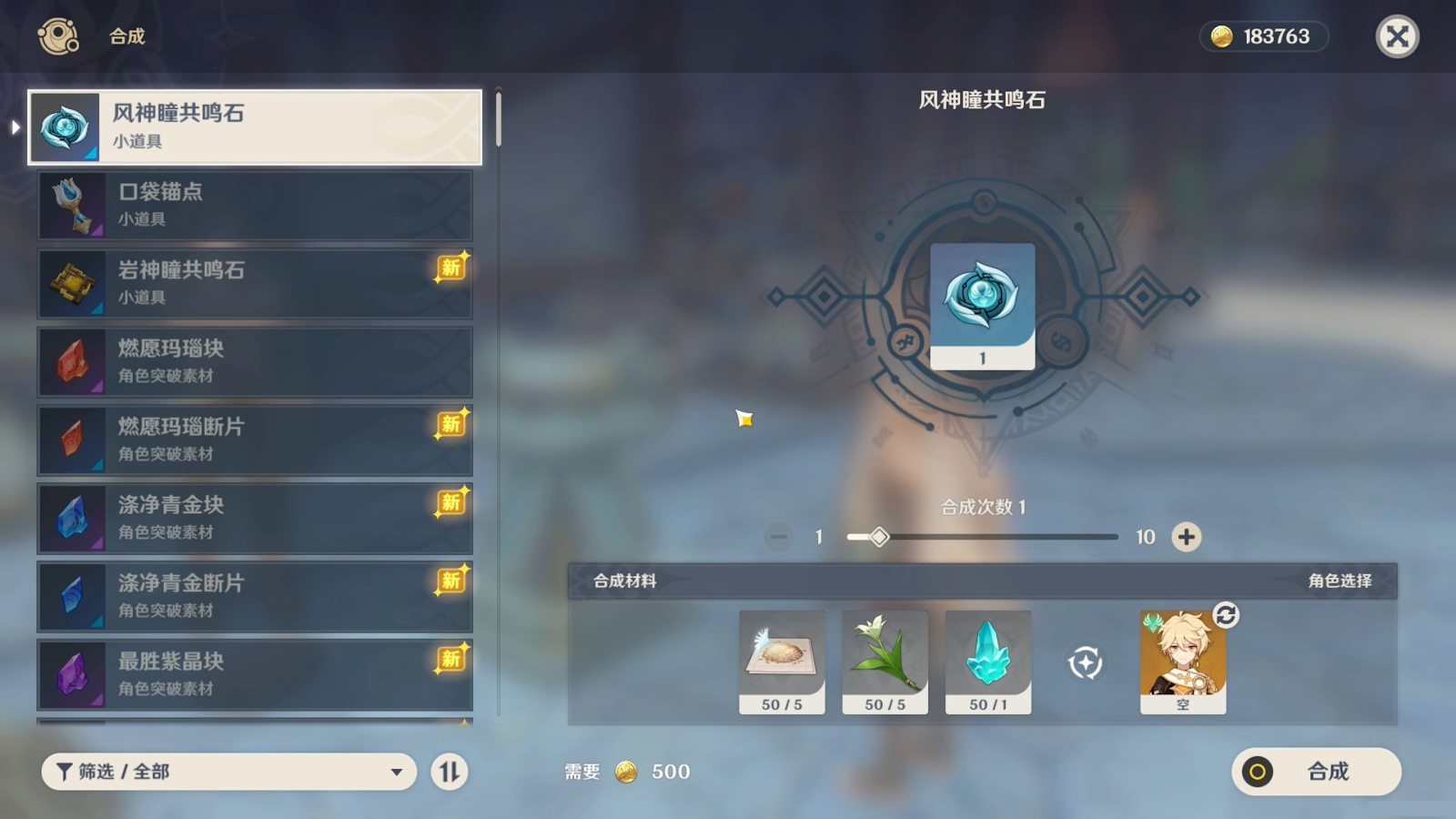 Perhaps most importantly is an increase in max Resin from 120 to 160 - a whole elite boss or event collection cost. Resin has been a pain point for a lot of players, especially those with time constraints, as the daily Battle Pass mission requires 150 Resin to complete. The increase in max Resin makes life a little more convenient, even if it isn’t an increase in Resin generation that many have been requesting.

A new co-op event - with a free Fischl reward!

The event, named Unreconciled Stars, will have multiple stages to be released over a number of weeks including a co-op activity similar to the Elemental Crucible revolving around securing or protecting meteorites.

Perhaps the biggest news from this event though is the oh-so juicy reward of a free Fischl, one the highest DPS characters currently in the game. 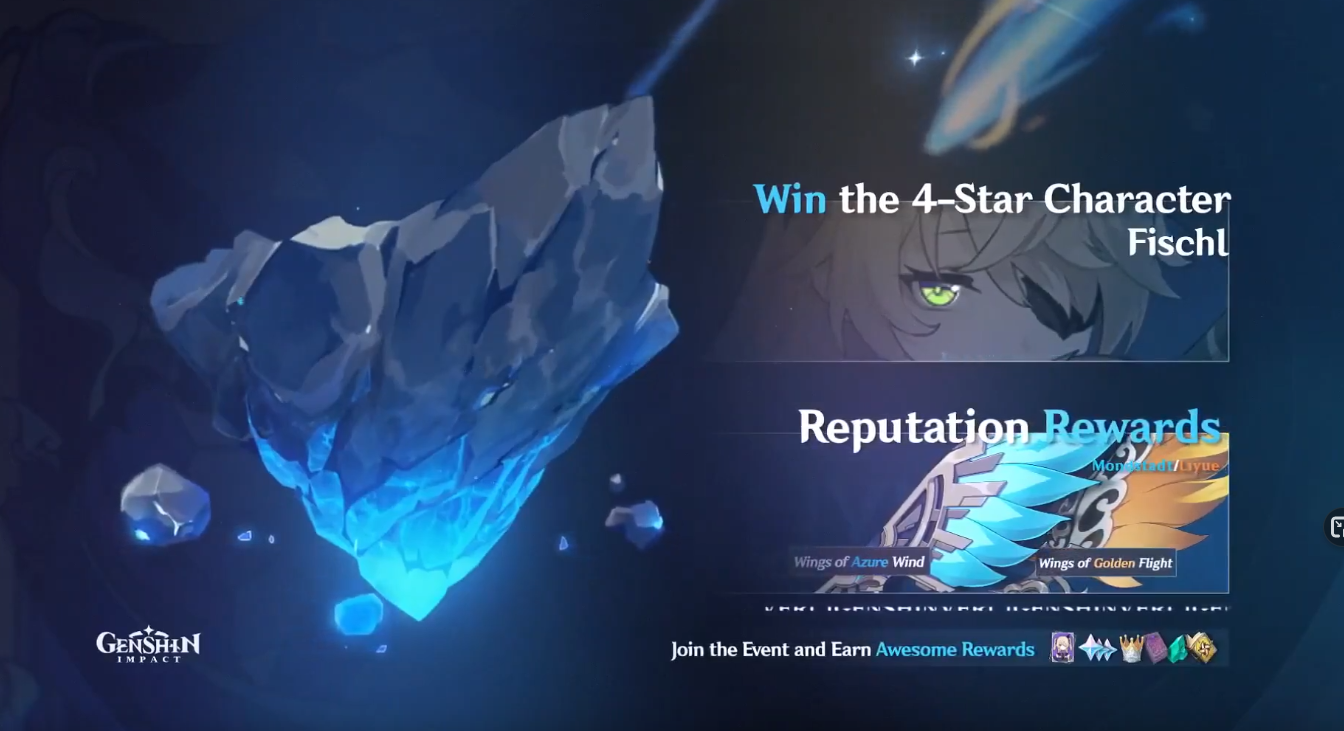 Alongside the aforementioned suspicions that Ganyu will be becoming playable soon, there are hints that the Adeptus Xiao may also be playing a more prominent role, either as a playable character or as a weekly boss. 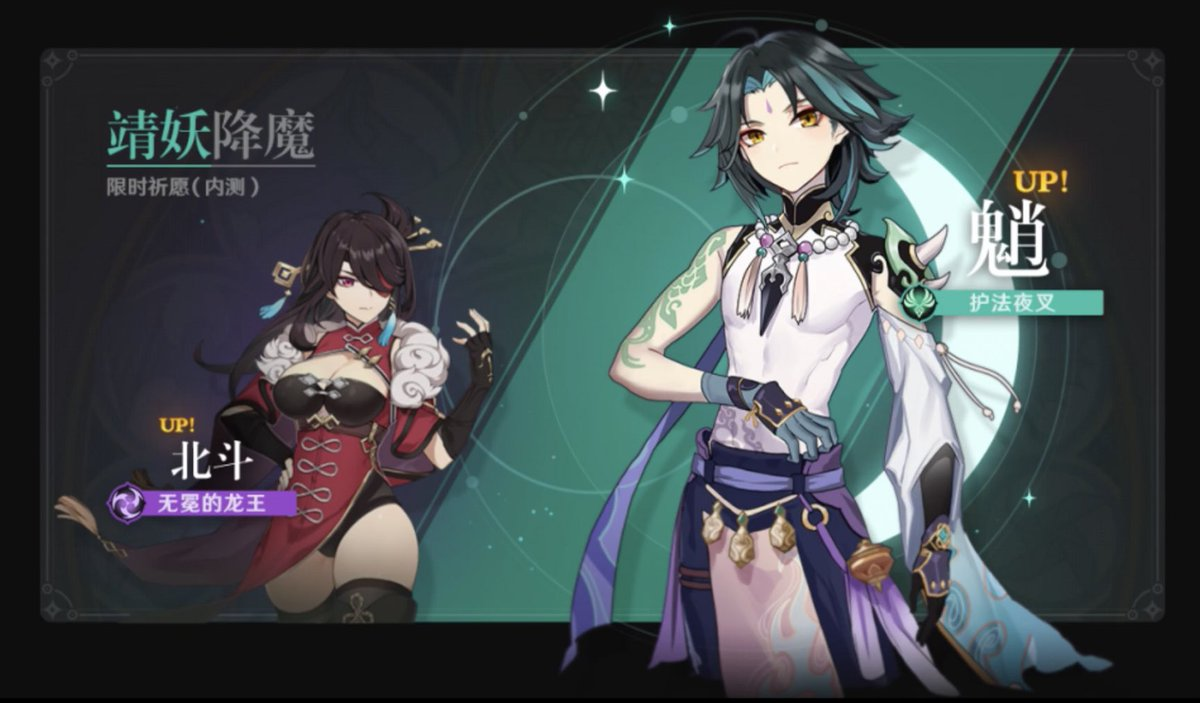 On top of this, there are hints of Glider racing, a referral event to entice players to convince friends to join, and a “food delivery” event with a Primogem reward.

That about covers it for Genshin Impact 1.1! The new update is scheduled for launch on 11/11.