Could a reintroduction of the “open circuit” save the Spring Split?

Josh Raven
Published: Jan 21st, 2020, 18:00
Following the changes to the Spring Split of the LCS, we take a look at the viability of reintroducing a form of the Open Circuit to franchised League of Legends. Two very interesting things have occured in the 2020 pre-season for League of Legends.

Number One: Riot Games announced that they were re-working the format of the LCS, with big implications on the Spring Split.

We take the first #NeosurfCup 2020

The LCS format change included the addition of Monday Night League, with weekly key matches taking place on Monday night, and the long-awaited move to double elimination playoffs. But perhaps the biggest change was the complete removal of the Championship Points system. In essence, the Spring Split now has absolutely no bearing whatsoever on qualification the World Championships.

Itâ€™s a change that makes sense in some ways, but doesnâ€™t in others. It does ensure that only the most in-form lineups will make it to the World Championships, with the downside being that a good team in a poor vein of form may miss out. Ultimately, it feels as though the change may be a futile effort in improving North American prospects at Worlds, but at least theyâ€™re trying something.

This, however, leaves the Spring Split as an even more pointless endeavour than it used to be. And it wasnâ€™t exactly the most prioritized split to begin with. Evidenced by G2 Esports using the Split as practice for Luka "Perkz" Perkovic and Rasmus "Caps" Winther to chop and change between mid and AD carry.

â€œThe Spring Split Problemâ€ exists because teams can change so drastically between Spring and Summer. A playoff contender in Spring can very easily find themselves at the foot of the table in Summer with just a couple of roster departures between Splits, or simply a downturn in form. Flyquest literally did this in 2019 - going from fourth in Spring, to ninth in Summer.

So how about an even more radical change?

Yes, that Excel Esports pre-season tournament was relevant. I havenâ€™t forgotten about it!

The example that Excel showed with their glorified friendly match was that there is interest in localized event, no matter how large or small they may be. The venue at Twickenham was easily the size of the Riot studio in Berlin, and was essentially â€œsold outâ€ (tickets were free).

The Kespa Cup is perhaps a better example of this, with several LCK and CK teams battling out through December and January. I use Excel because it is the stepping stone for something similar to take place in â€œthe west.â€

But letâ€™s think bigger than pre-season. Why should this be limited to just a week or two before the start of the season?

Imagine the 2-3 months of the Spring Split instead filled with a myriad of national and international tournaments. Not as prestigious as Worlds, or even MSI, but something different from the same old routine. A variety of content for fans to enjoy, better and more diverse practice for players, and even potentially new commercial opportunities for Riot Games.

Imagine, rather than the tepid Spring Split matchups, you instead have G2 Esports vs Team Liquid, Fnatic vs TSM, and Origen vs Cloud9. The winners receiving a little prize money, and points to accumulate towards qualification MSI.

The funny thing is that this actually did happen before, on an even bigger scale!

Back in Season One and Two, the likes of Fnatic and Counter Logic Gaming would routinely jet off to South Korea to compete in OGN. Of course, this was well before the introduction of regional leagues, and almost a decade before franchising. And yet those appearances - along with other international tournaments that occurred during the open circuit era - are often recalled as the â€œgolden ageâ€ of competitive League of Legends by veteran viewers.

When the open circuit went away, the competitive scene lost a little of itâ€™s charm. No more sporadic matchups between the top North American team and the top European team, no, that would have to wait until Worlds or Mid-Season Invitational. Twice a year... at best.

The scene became more secure. Investments are no longer as big a risk, and teams can enjoy the security of remaining at the highest level of competition without the threat of relegation, leading to more investment, better salaries, and more opportunities for fans and viewers. However, the re-introduction of a semi-open circuit doesnâ€™t have to signal the end of that security.

In fact, sending their teams to compete at international tournaments, small though they may be, has the additional benefit of possibly attracting more fans from foreign shores. We know that Riot Games Europe and North America tend to work separately to Riot Games Korea and China, so getting those regions on board may be a challenge, but even just rolling this out for the LCS and LEC would be a step in the right direction.

Riot Games have often been open to experimenting with their competitive events. Introducing aspects like MSI, Battle of the Atlantic, and All-Stars. Yet when it comes to their domestic leagues, there seems to be a slight unwillingness to push the boundaries. 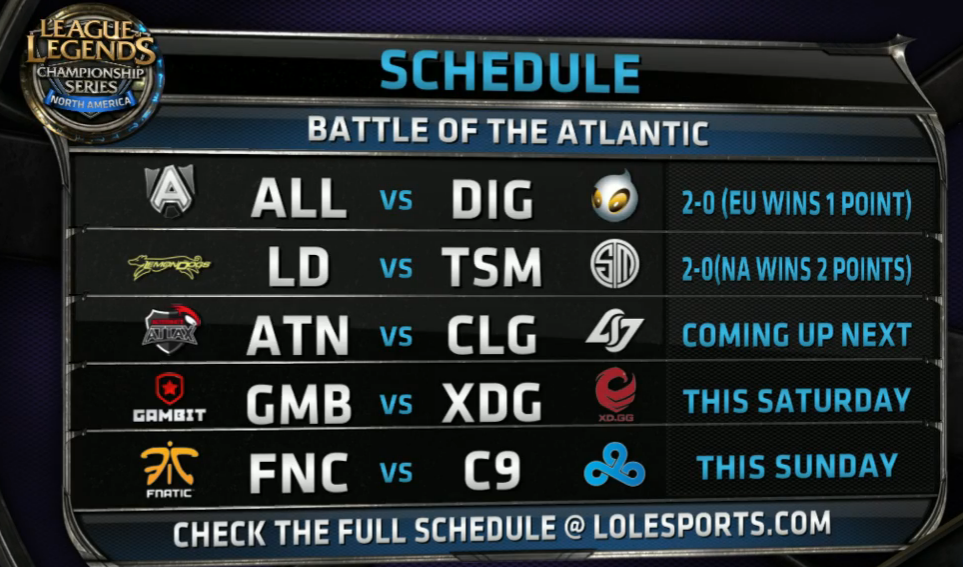 I wouldnâ€™t expect to see a drastic change in the immediate future, but with the acceptance that the Spring Split undoubtedly means less than Summer, we can hope that innovation comes sooner rather than later.

For now, we can all settle in and enjoy the mildly interesting but ultimately irrelevant fixtures of the Spring Split, while anticipating the real competition when Summer kicks off in June.