by Sam "Initia1ise" Hapgood
With the latest episode of Night City Wire, CD Projekt RED have begun to let fans catch a glimpse of the immense city-scape (It even comes with its own tourist website). Let’s go get lost in the urban wilderness - and maybe be a little less lost when the game finally drops! Published on September 19th, 2020
Cyberpunk is set to be an immense game, by sheer virtue of size alone. The latest Night City Wire episode started giving us an idea of what we can expect out of the eponymous city, helped out by an all-new website offering information to the wannabe tourist.

Night City Love aside, it’s clear from the discussions the designers have been having in the recurring teaser video come podcast that there has been an incredible amount of care and attention poured into the cityscape. One quote in particular sums it up: “In a way, Night City is the star of Cyberpunk.” If that’s the case, we better sink our teeth in and understand the star of the show a little better.

Night City is a city on the coast of California in the not so distant future of 2077. That means it comes with all the things one would expect from a U.S. east coast city: a massive industrial port to facilitate the trade so many of those cities rely on, hot, dry weather and the terrain to match, and of course a sprawling mishmash of cultures and styles blended together in the form of various districts. Six of them, to be exact. 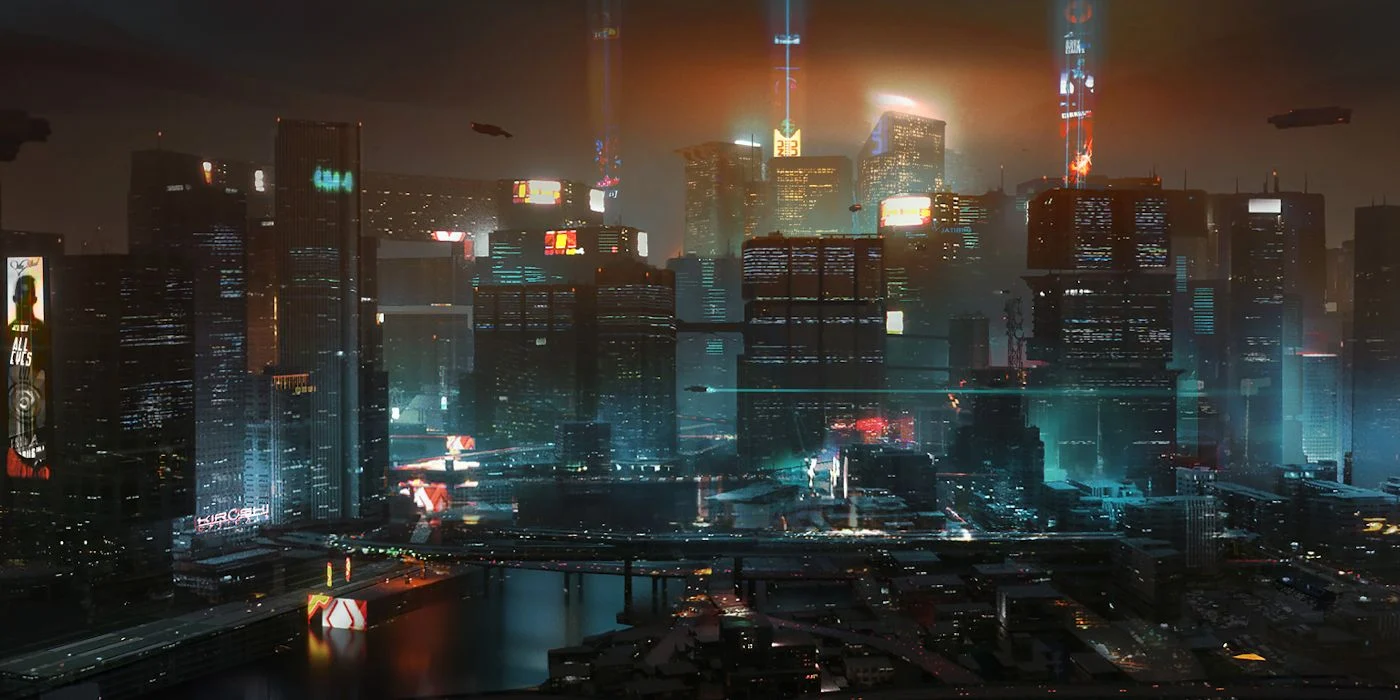 Before we dig too deep into all the distinct districts in the game though, let’s keep an eye on the bigger picture. The city is massively dense (no surprise there), but it will change the way you explore compared to say, The Witcher 3, CD Projekt RED’s previous flagship game. Where in Witcher, one of CDPR’s Senior Level Designers, Miles Tost, explained, you might set your eyes on a distant castle and just… go there, that simply isn’t possible in Cyberpunk.

In short, it’s too dense, and more importantly, too vertical. Buildings aren’t buildings, they’re super-structures made of multiple buildings all built on top of one another, and the ground around any given one is a warren of back alleys and hidden passages.

Tost explained that players should expect exploration to feel more “intimate” than previous games, with any alley you head into as likely to hold violent gangers as it is an unobtrusive elevator that turns out to be a short-cut. Getting from A to B is half the fun, especially if it involves winding through C to Z.

The flipside of that, is it could very quickly become overwhelming. That’s where the level designers come in. No matter where you end up lost, you should have some clue about where in the city you are by how distinct the city districts (and their many subdivisions) are. Warren of back alley shops and giant floating carp digitally appearing in the air? You’re probably in Kabuki, a subdistrict of Watson.

Furthermore, the level designers have gone to the lengths of naming every street in Night City. You want directions from NPCs or online forums, you’ll find ‘em quick enough. It’s those little touches that are set to make Night City live and breathe. Nevermind street names, Tost said, all the trash is hand placed on those streets for exactly that purpose.

“Gargantuan skyscrapers that shade an endless tangle of streets. A neon glow that sets the stage for a ballet of flesh and steel…This is Night City’s core, its heart, its dream turned reality.”

The quintessential Cyberpunk district. Vast skyscrapers? Check. Neon light-shows? Check. The City Center is one part Canary Wharf come Wall Street, one part exclusive nightlife destination for the rich and famous. It’s Corporate central, if you choose that as V’s origin, and home to the likes of Corpo Plaza and the ever glitzy Downtown. Night City Love also recommends 7th Hell (Final Fantasy VII sends its regards), a bar for those looking to indulge in a little rebel-chic atmosphere and some custom cocktails.

That said, while the district is safer than some of the others, it wouldn’t be Cyberpunk if there weren’t threats hidden just out of sight. Muggers and gangs are still working out of Downtown’s back streets, and those Corpo guards tend to find themselves above the law more often than not... 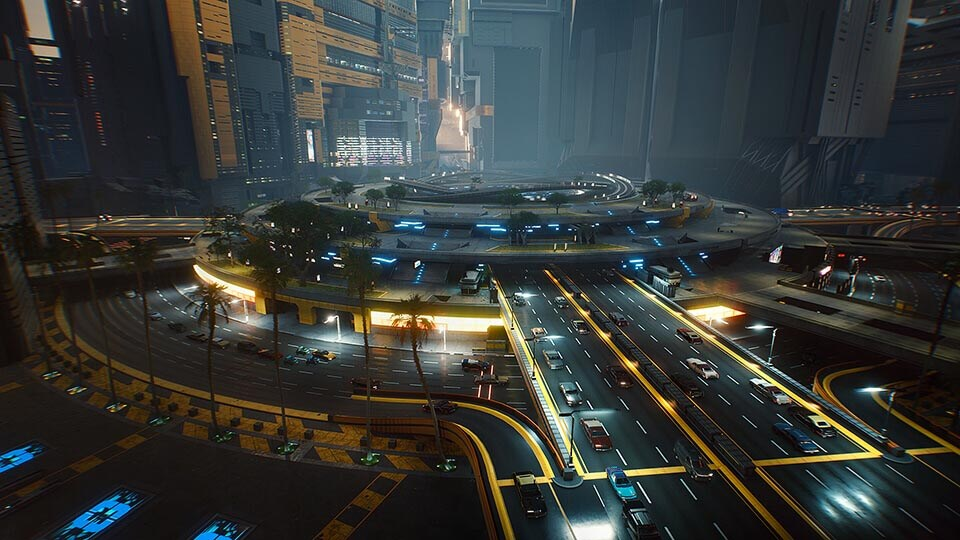 “When nuclear disaster struck Night City’s center in 2023, the nearby town of Watson became the ark to which the city’s battered but not broken populace fled for shelter. By the 2050s, however, Watson’s role had changed from nucleus back to periphery.”

A former competitor to the likes of the Arasaka Megacorp, Watson is a shell of its former glory, sucked dry by a ruthless Arasaka in the wake of the Unification War. Now, with its Japanese investors forced out, and it’s formerly prosperous factories and med-center sitting silent, it is the poorest district in Night City outside of Pacifica.

Outside of the Northern Industrial District, it also contains the likes of Kabuki - a warren of back alley bazaars and hawkers, in the style of the real-life district found in Tokyo. Its Japanese origins are apparent (influenced by its former investors), with the nightlife to match its namesake, alongside being home to pretty much everything you could ever want on or off the black market… with all the complications that entails.

It isn’t the safest place either: The Tyger Claws, The Moxes, and The Maelstrom all get involved in turf wars across the district. Come armed and ready to fight off a scam or an assault. “Heywood exudes a subtle, yet unmistakable charm. It boasts a broad variety of shops and restaurants, from the bougie boutiques and seafood saloons along the coast to the colorful open-air markets and taco stands of Vista del Rey…Despite rumors spread by the perpetually malcontent, it was not constructed on radioactive landfill.”

The biggest residential district in all of Night City, Heywood moves from chic, modern skyscrapers and parks owned by Corpos and the well-to-do in the north, to the gang-infested slums of Vista Del Rey in the south. The south end’s gang problems come in two forms: the drug-running Valentinos, who face off against 6th Street, and their self-serving brand of vigilante justice.

Interestingly, this is also the one part of the city with a government presence, the rest now being Corpo run. That means you’ll find a fairly hefty police presence (in the north side) and City Hall.

And hey, those rumours of radioactive waste don’t have any truth to them… right? 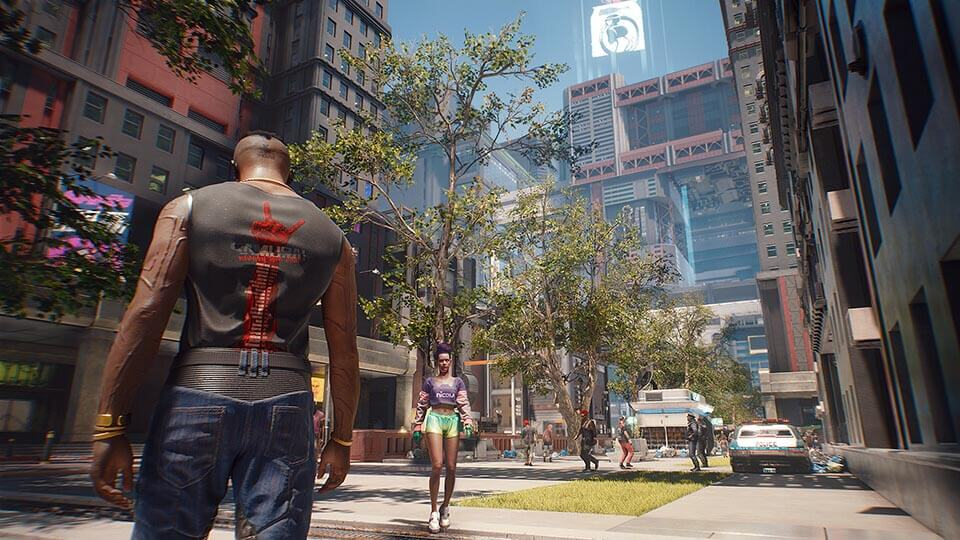 “...a mere bridge away from the best career prospects in the city, Westbrook is the desired place of domicile for both the up-and-coming (in Charter Hill) and the already-arrived (in North Oak).”

The place to live and have fun in Night City, Westbrook is home to the truly elite in North Oak, and those that wished they were, in the matchbox housing of Charter Hill. If North Oak is an idyllic, Beverly Hills analogue of the rich and famous, then Charter Hill is for the ambitious and not quite-made-its. Mass housing and armoured cars for security are the word in Charter Hill.

As for the fun, Japantown is home to the city’s sizable Japanese diaspora and the most exclusive nightlife in Night City. Don’t have enough money for the braindance clubs, gaming parlours and myriad of food stands? Then go grab a loan and hope it’ll last the night. Japantown is also run by the Yakuza-like Tyger Claws, even if they keep a low profile by day. Keep your wits and wallets about you and you’ll come out on top. Mostly. 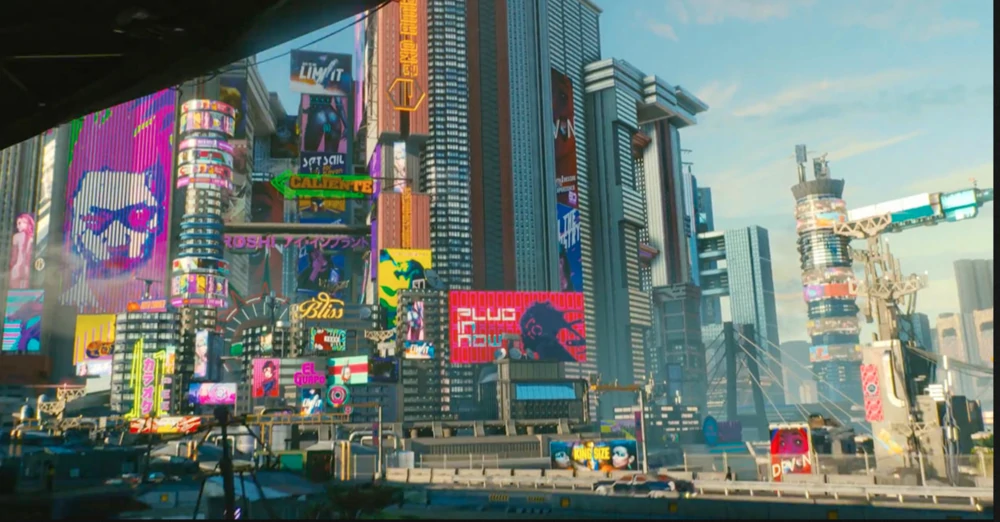 Half Industrial wasteland and megabuildings, half working class suburbia, Santo Domingo is its own insular community of life and work. It’s a mix of industrial foundries and megabuildings alongside and rows of identical houses, reminiscent of traditional American homes of the early 20th century.

To make things even more interesting, 6th Street, a gang formed of disenfranchised military and security veterans, make their home here. They allegedly perform the role of “neighbourhood watch,” but get their hands dirty in armed robbery, protection rackets and car jacking. 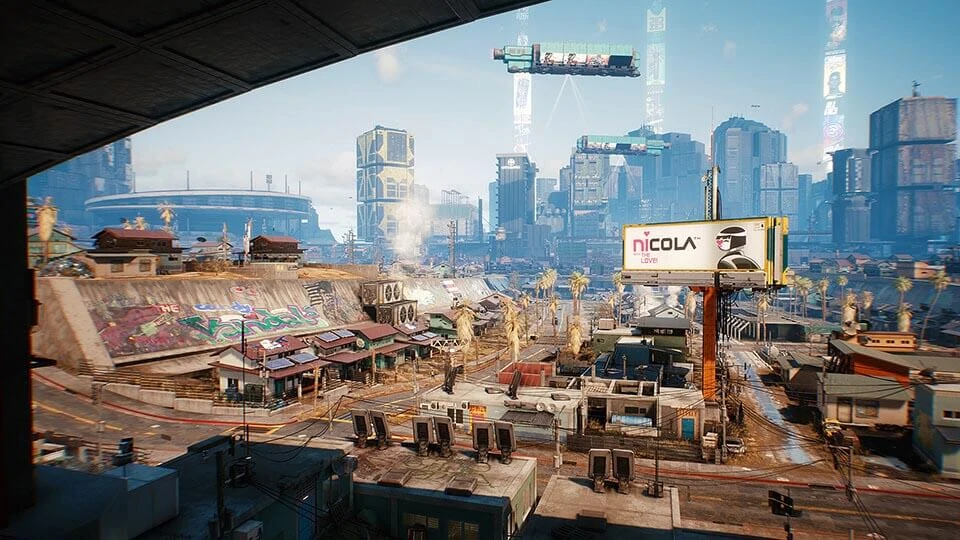 “What do you see? Crippling poverty? Crumbling infrastructure? Rampant gang violence? And nothing more? Then you, my friend, lack vision.”

Designed as a tourist destination and luxury vacation resort, the economic collapse left the district unfinished, unfunded, and lawless in the extreme. Instead of a beachfront paradise of hotels and entertainment, it is rife with the hulks of concrete buildings left incomplete, rampant poverty, and mass homelessness.

And that’s without considering the open gang warfare being waged on the streets. Take it from the Night City Love website: “The Night City Police Department’s current threat level for Pacifica is: CATASTROPHIC.” 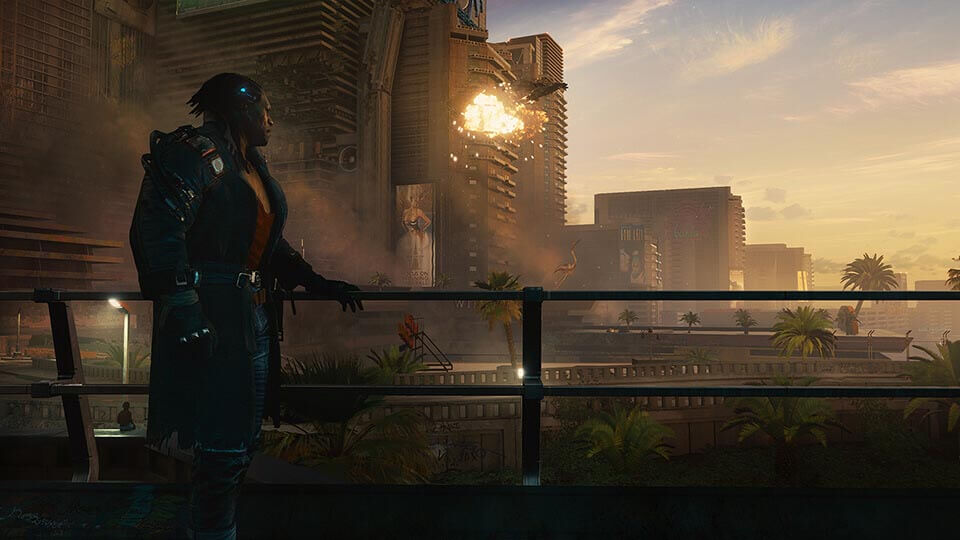 “Areas outside city limits are extremely dangerous. But should you choose to explore them, there are several landmarks of interest to see—preferably from a great distance, through the bulletproof windows of an armed convoy.”

While not strictly a district, it would be remiss not to touch on the Outskirts. Home of the Nomads (and thus where your Cyberpunk play-through will start if you pick Nomad for V’s background), the Outskirts are a vast, wildland of drifters, scavengers, and farming communities - alongside some pretty scary threats Night City security keeps from crossing the city borders proper…

Solar power plants, synthetic protein plants, and ghost towns keep the outskirts from being too barren, though. Just make sure you have a fast car and a faster trigger finger if you’re going to spend any extended time here. 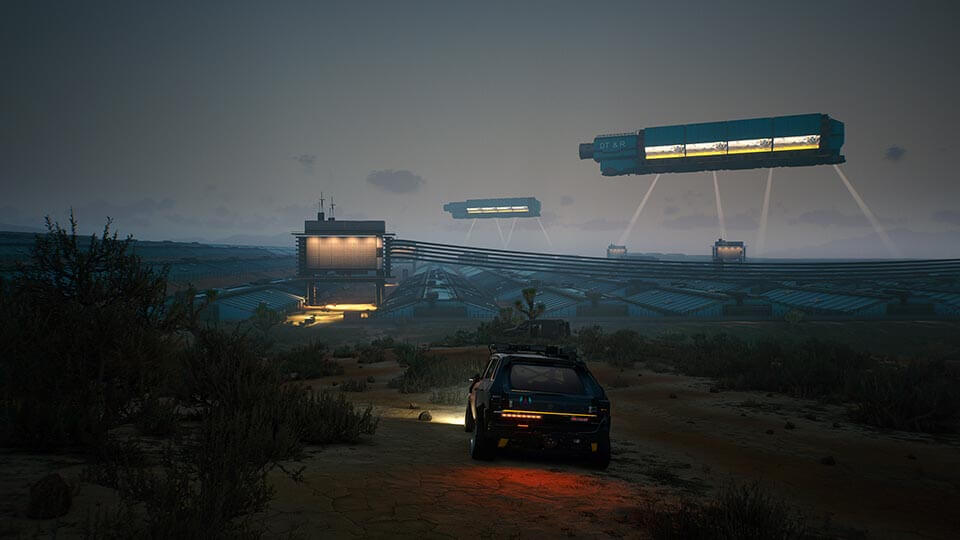