by
Alejandro Sandoval
Studio miHoYo has released all the information about Genshin Impact v1.4 update, and here is everything you need to know about it. Several weeks have passed since the release of Genshin Impact’s 1.3 update, which has brought the Lantern Rite festival, as well as some new weapons and special characters like Xiao and Hu Tao.

On 6th March, through its traditional live broadcast on YouTube, miHoYo released all the details about update 1.4, which will bring with it a bunch of new enemies, as well as Rosaria as a new playable character, and a new special event located in Mondstadt, the Windblume Festival. 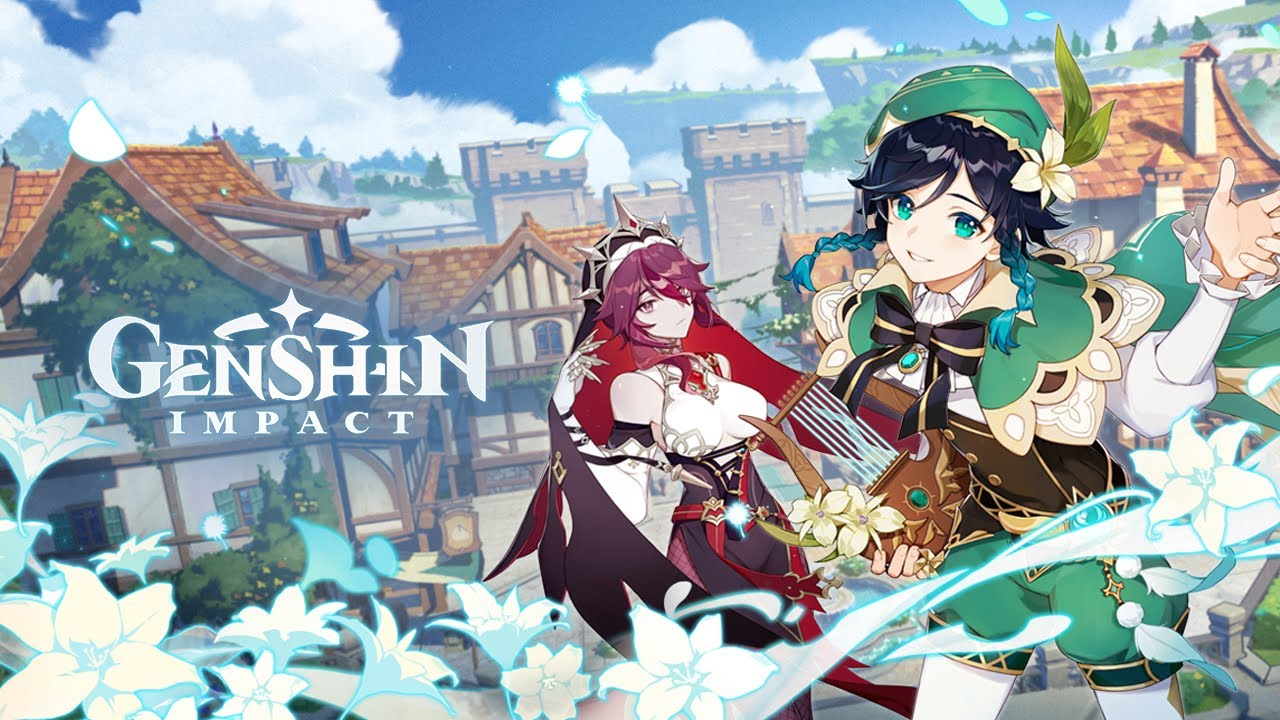 As soon as the stream began, the voice actors of the Traveler, Paimon and Venti welcomed all the players and then presented all the content of the new update.

Update 1.4 will be available worldwide on 17th March under the name Invitation to Mondstadt.

The main event of version 1.4, known as the Windblume Festival, will bring with it a new holiday within the Mondstadt region, after having spent a whole month focused on Liyue.

The featured character for this update will be Rosaria, the Thorny Benevolence. A nun made her first appearance during the main story in update 1.2  when the new Dragonspine section was introduced into the game.

Rosaria will be the first Cryo element character with a Polearm as her primary weapon, and she will arrive in-game via the banner, Farewell to Snezhnaya, available during the month of April. 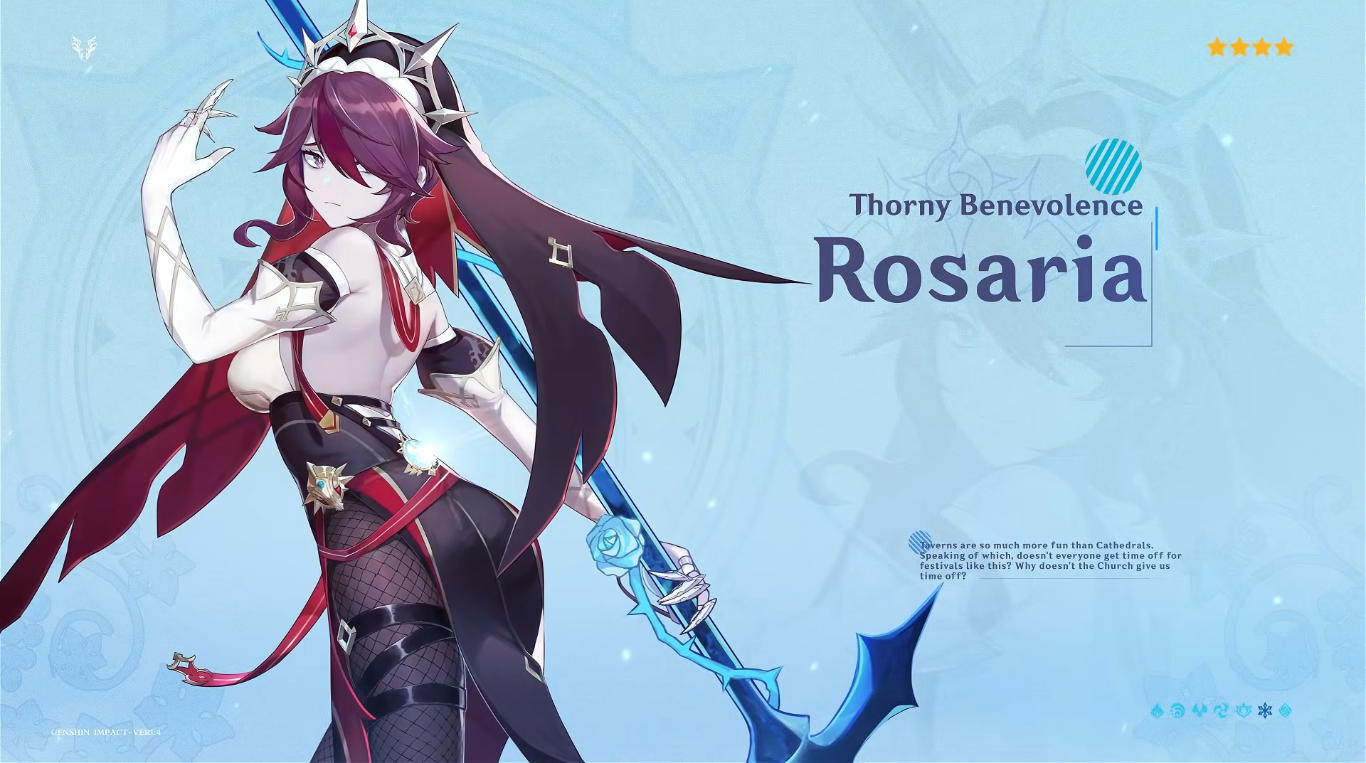 In addition to Rosaria, another character will have a big role within the new update, and it will be none other than Venti, the Archon known by the people of Mondstadt as Barbatos, and who will be available in a new banner for the first time since the launch of the game.

This new special banner, Ballad in Goblets, will be available starting 17th March. 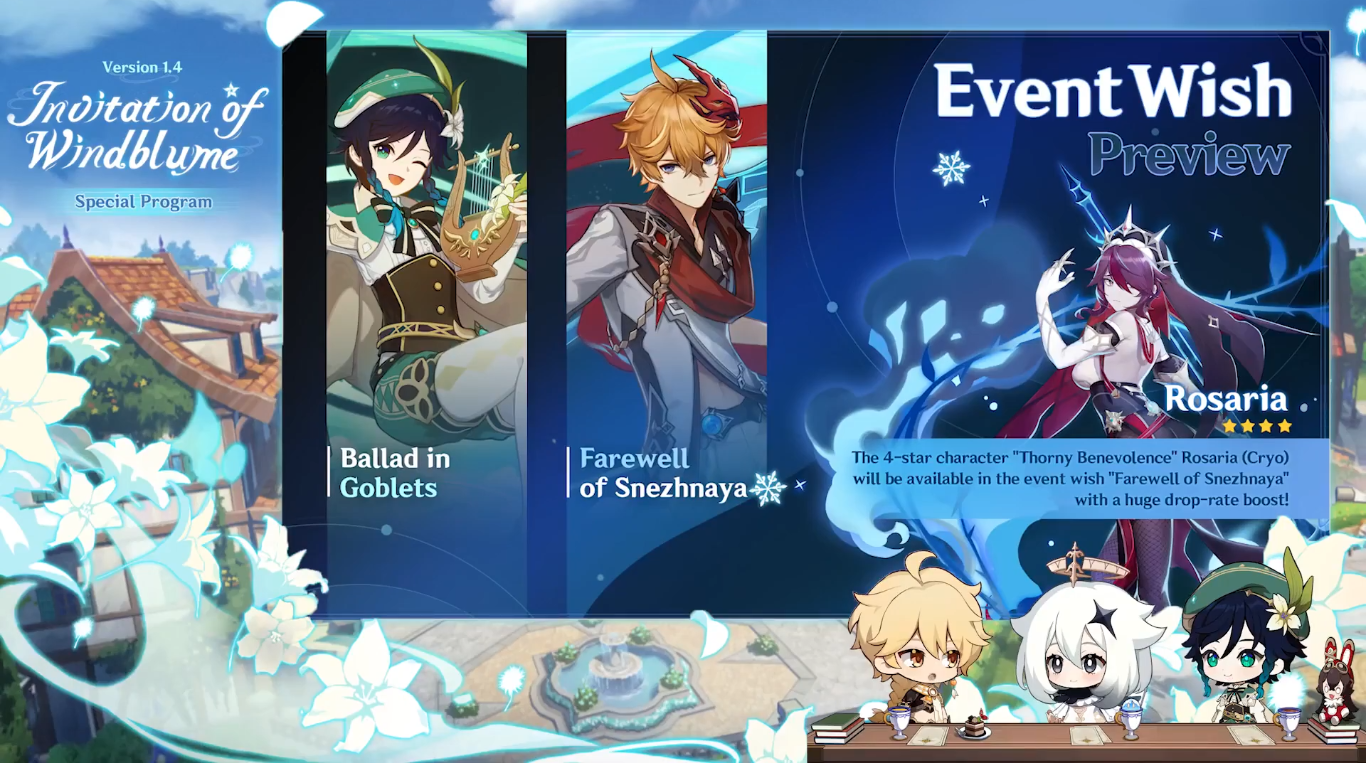 Additionally, new weapons will be available in the Epitome Invocation banner throughout the update, all based on the Windblume Festival: 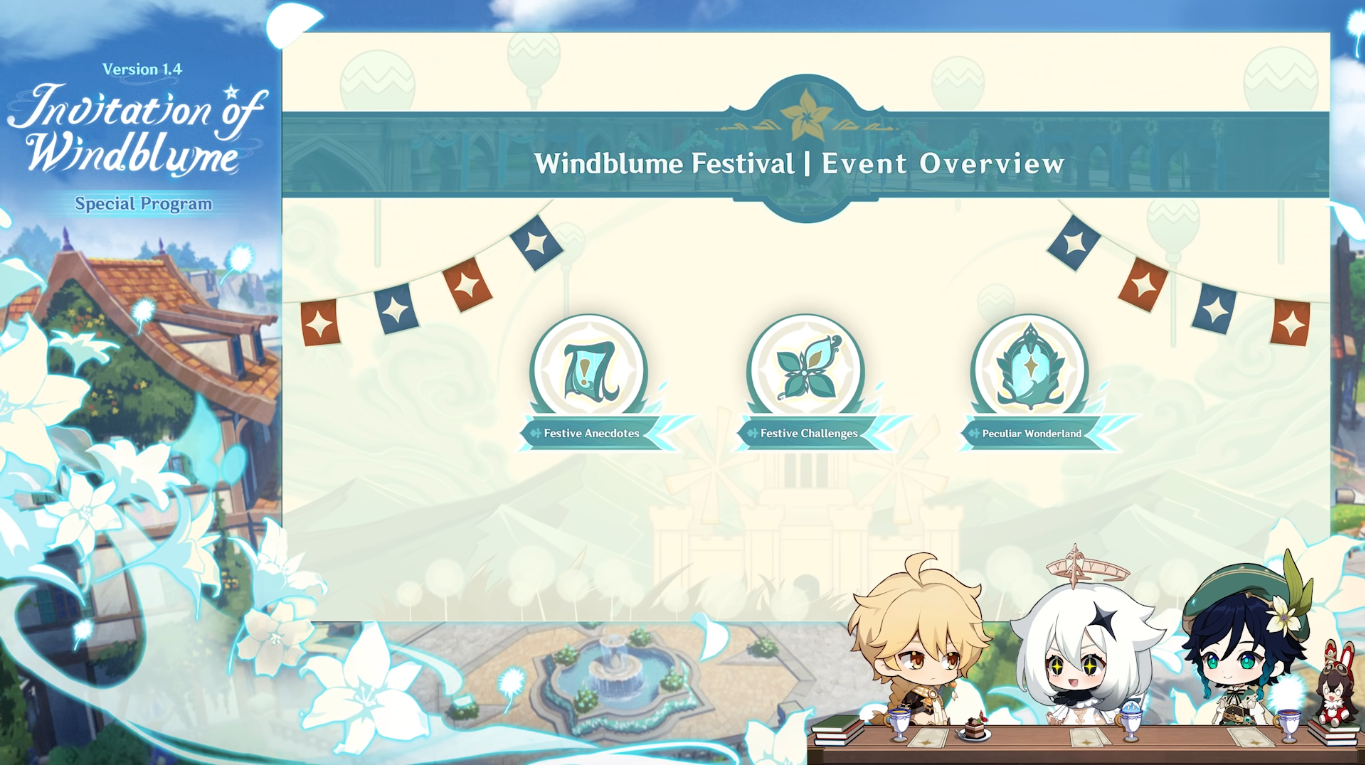 This event will be split into three parts, with the first being focused on the main story of the event and its Festive Anecdotes, where we can learn more about this event in which the people of Teyvat offer many types of flowers to both Barbatos and also to their loved ones.

The second part will bring with it new mini-games within the Festive Challenges, which will be able to test your aim and dexterity with three different tests:

These events will only be available during the main event, however, if you participate in all of them you will receive special rewards such as a Commemorative Balloon and the Windsong Lyre, with which you can play your own songs at any time. 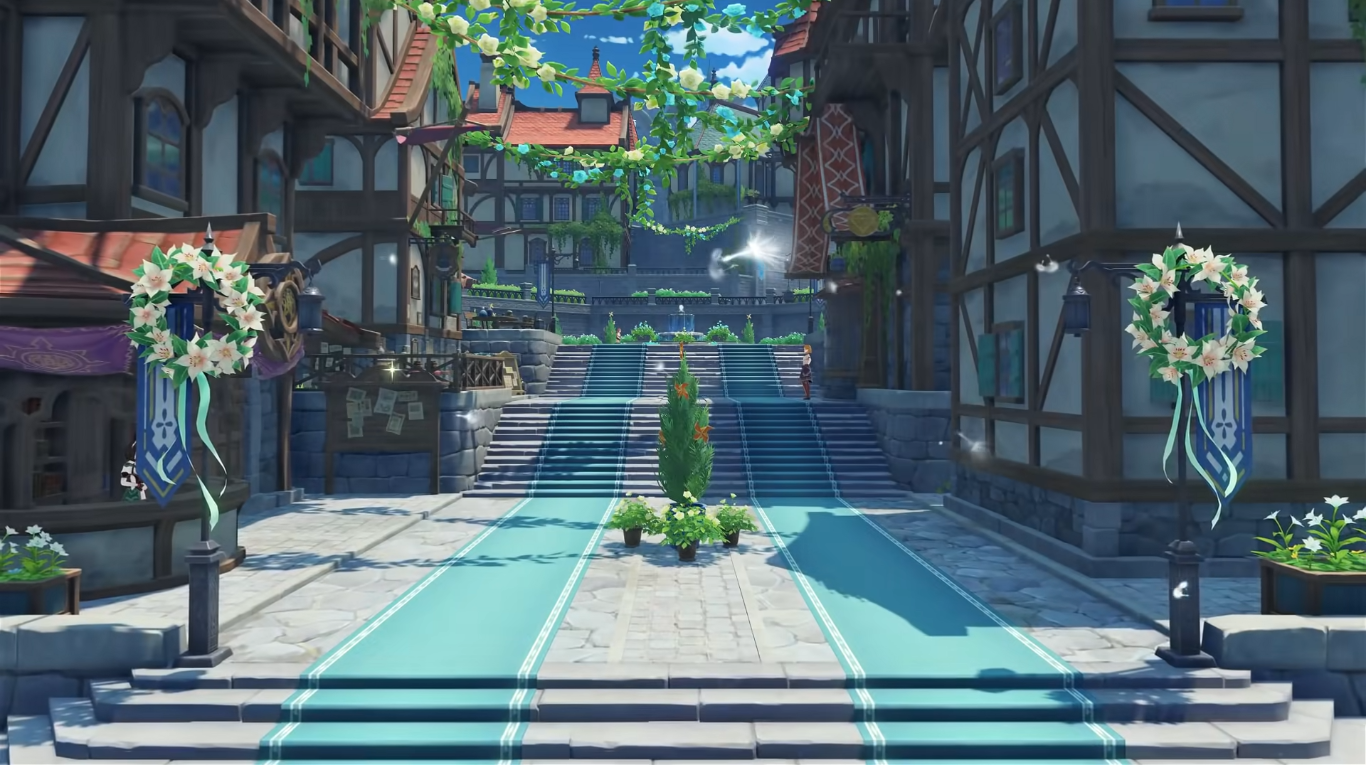 The last part, Peculiar Wonderland, will be a new type of Domain in which players can play three mini-games of speed and memory in order to gain certain advantages before they face its final boss.

Upon completion of these Domains and limited-time Events, players will receive Peculiar Collab Coupons y Festive Tour Tickets, which can be exchanged in the event store for the following rewards: 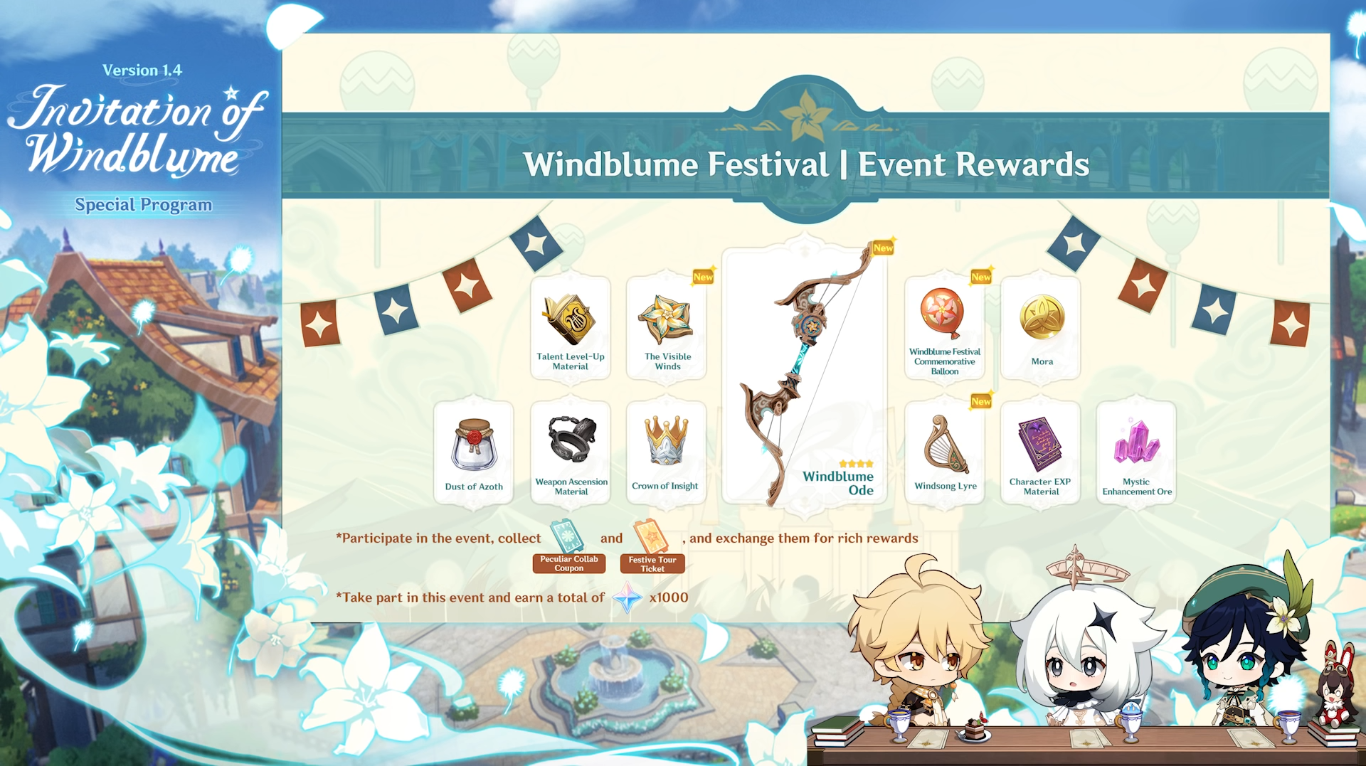 A new permanent feature will come to the game in the form of Hangout Events, which will allow us to learn more about the playable characters through special interactions, which will lead us to have a kind of date with them. 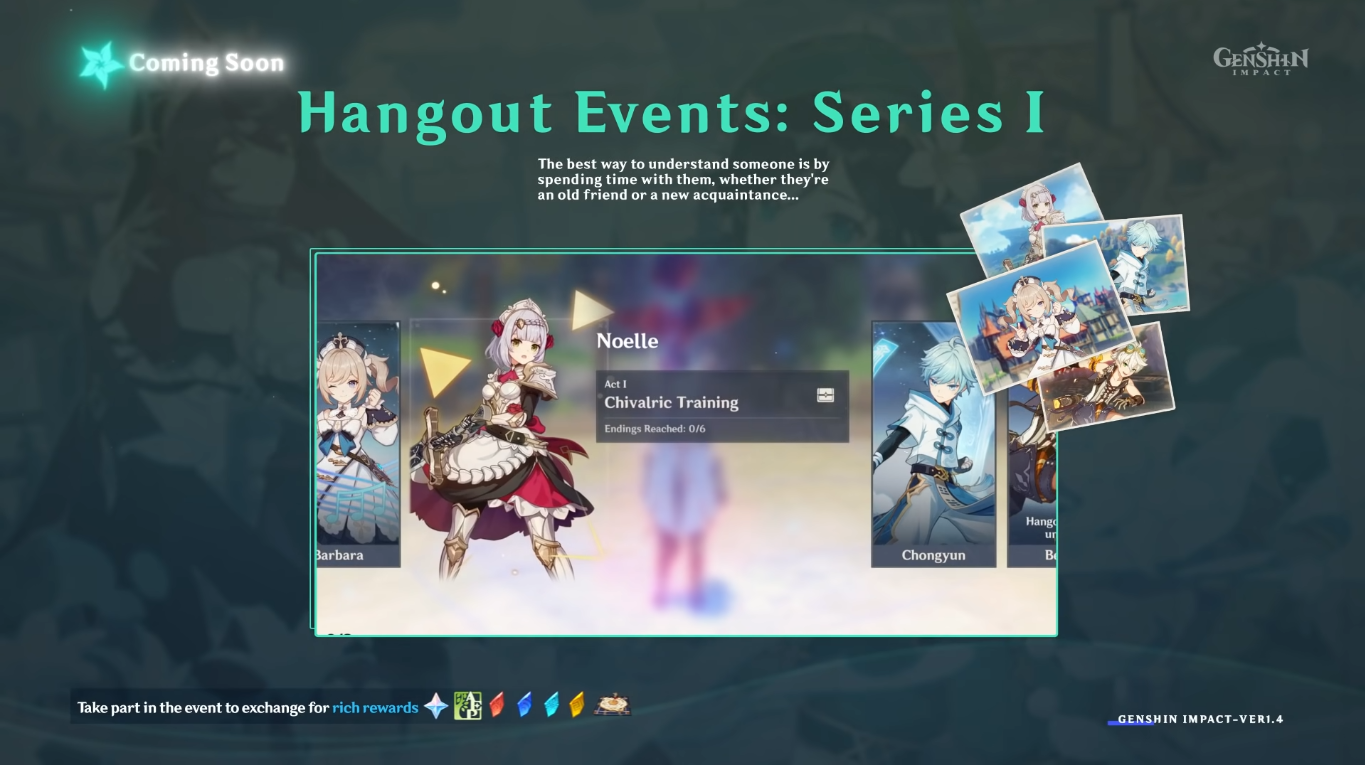 Having a visual novel style, we must choose the correct options in each of these interactions to advance in the story and unlock Hangout Memories, which will give us postcards of our dates with any character and additional rewards.

Each of these can be unlocked by using two Story Keys and will be available at all times even if we cannot complete them, or if you want to get all the available endings.

Two new enemies will join the game's roster. The first one is the Hydro element, known as the Abyss Herald, which has attacks of great speed and impact, as well as incredible strength and size. 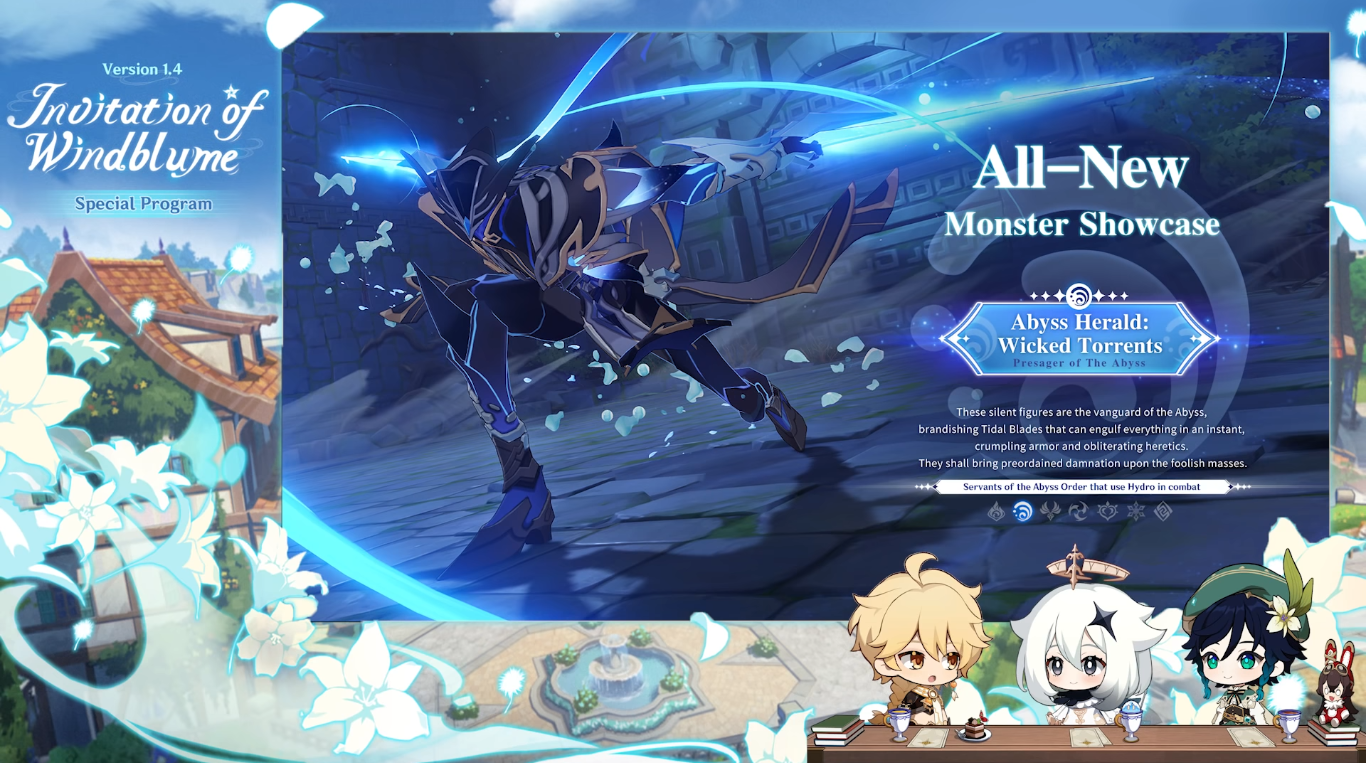 We will be able to find out more about this enemy thanks to a new special mission within the Archon Quests, where we will meet Dainslief, the Bough Keeper, who will be trying to discover the secrets of the Abyss, and we will find out the history behind the Ruin Guards.

The second enemy we will encounter is Rhoedia of Loch, a big Hydro-type monster that will be available through the Wishful Drops mini-event. 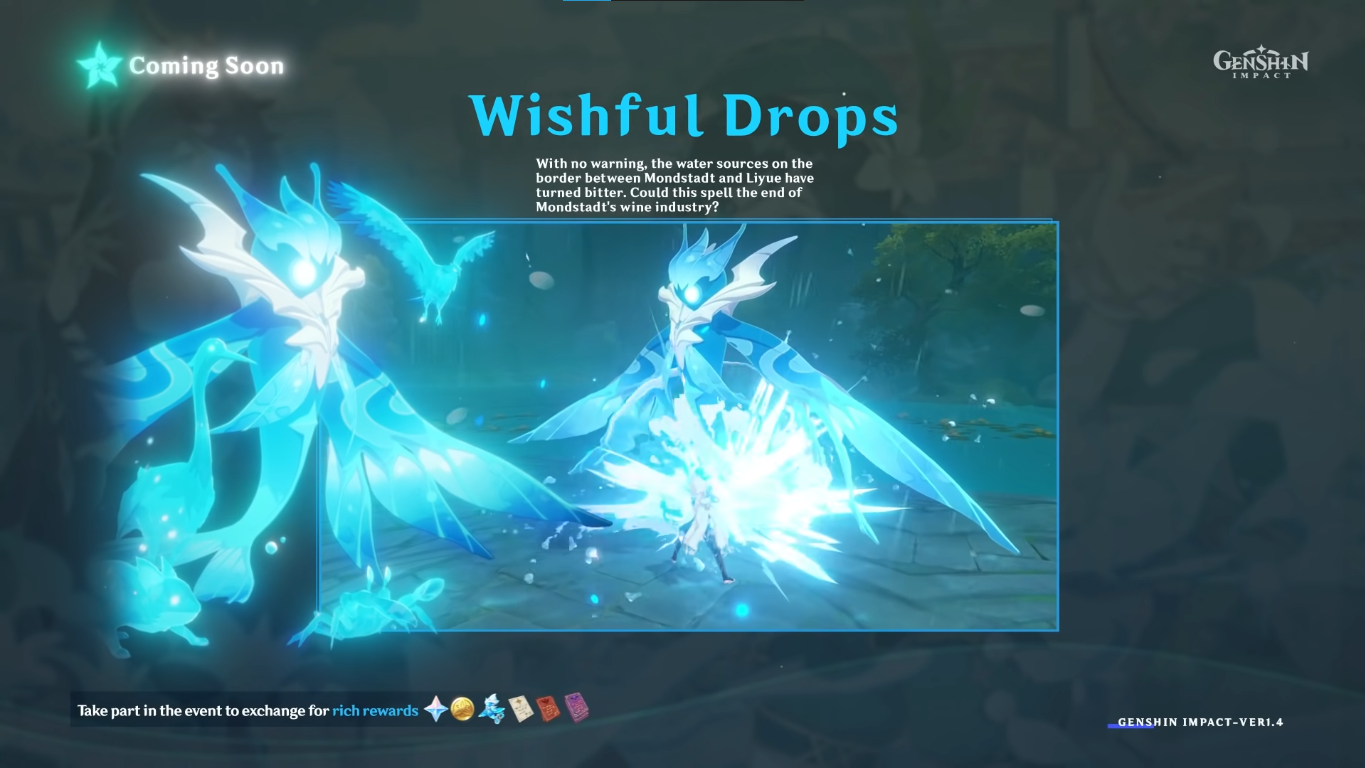 By participating in this event, and if you manage to defeat the Rhoedia of Loch, you will be given rewards such as materials to improve your arsenal and characters, the new Heart of the Spring item, and a new Hydro pet called Endora, who can feed its power by fighting other Oceanids. 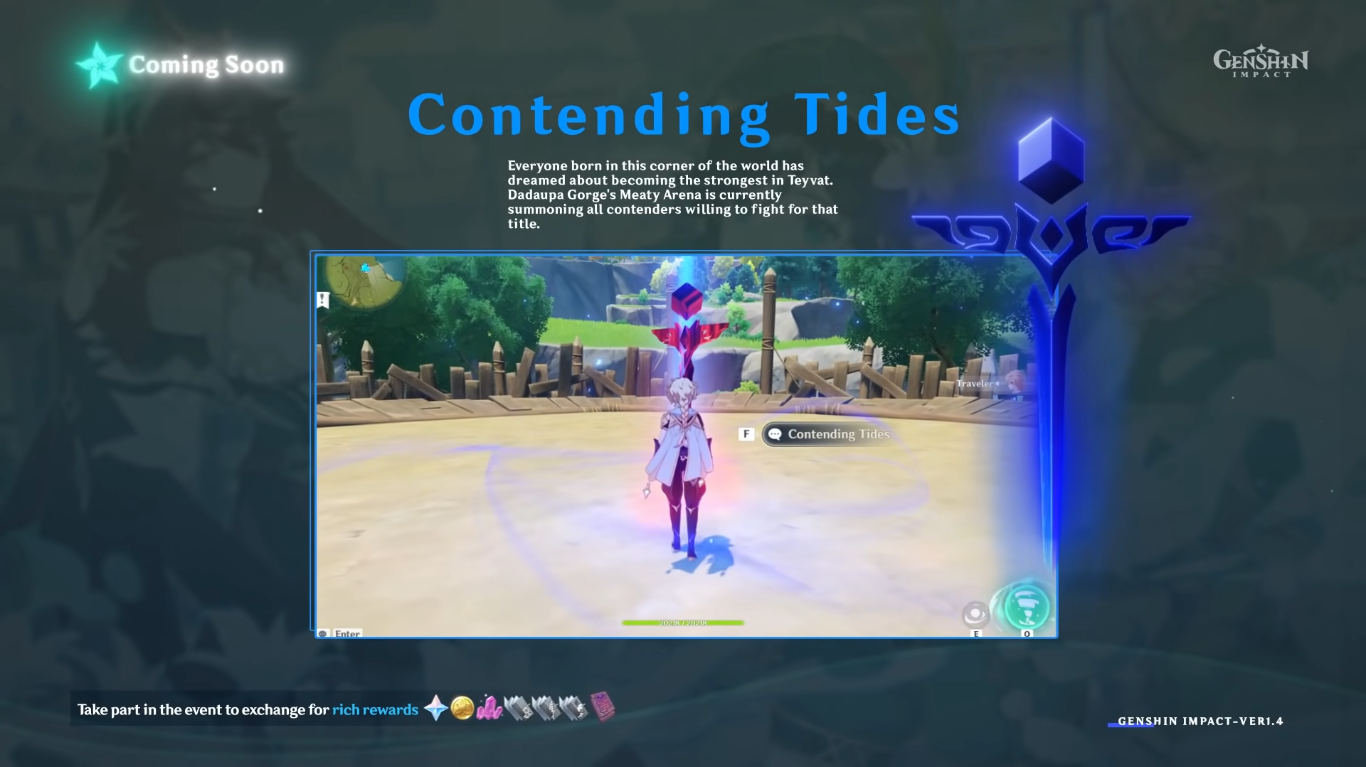 Dadaupa Gourge’s Meaty Arena will once again be filled with great fights, through this new event.

In this one, we will have to battle against different hordes of enemies through different modalities, one more difficult than the other, but with better rewards as well.

Depending on what is asked of you, various fighting styles will have bigger advantages, so you must be prepared for any situation. 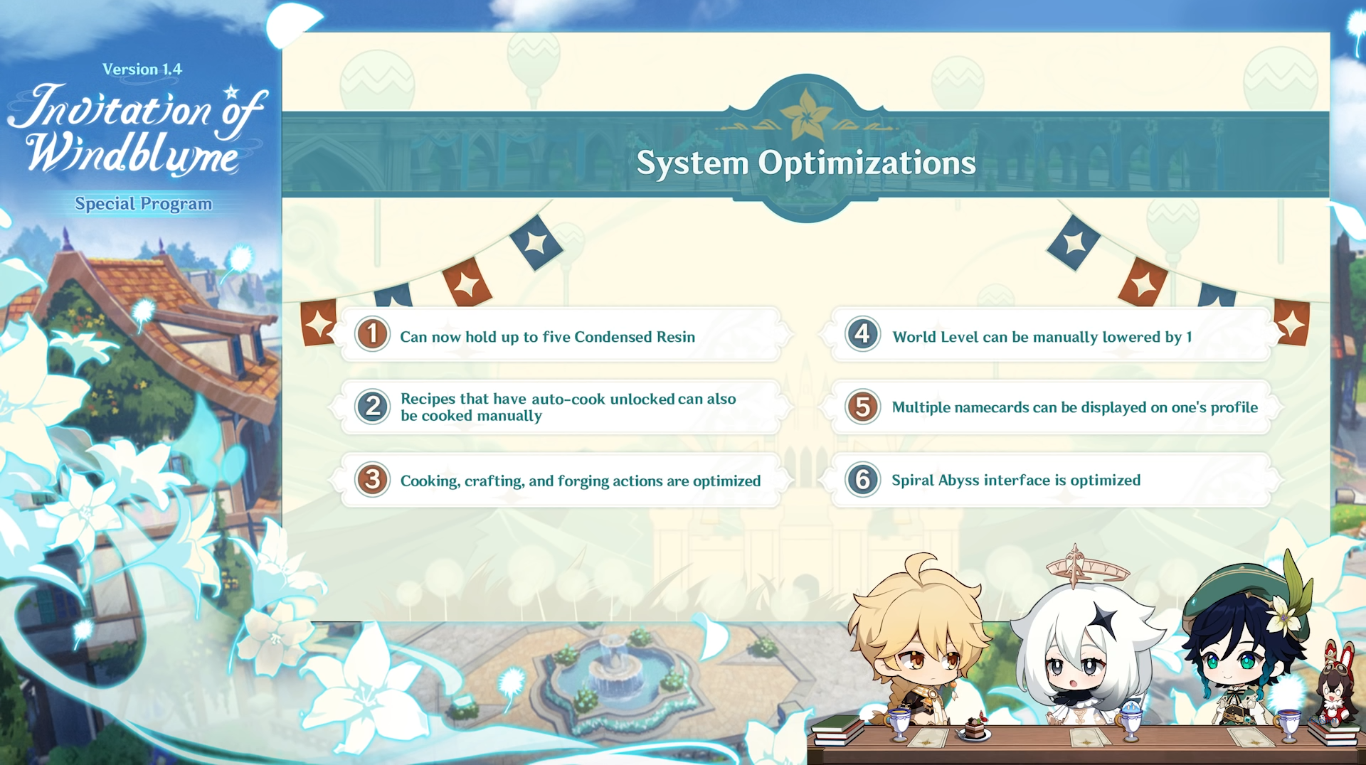 To finish, and as was announced a few days ago in their Developers' Discussion session, new improvements will be available within the game to make the experience of the players in Genshin Impact a little easier.

These will directly impact the Condensed Resin system, cooking, crafting, and forging, some interfaces, and for the first time it will be possible to change the level of the World you are playing in, in case you are not ready for more difficult challenges.

The new Genshin Impact 1.4 update, Invitation to Windblume, will be available on March 17.