On April 24th, a crazed fan infiltrated miHoYo headquarters with the intent of killing two of the company’s founding employees, Cai Haoyu and Liu Wei. The assassination attempt was allegedly motivated by a recent Honkai Impact 3rd update. He intended to kill the two executives and then himself by jumping off the top of the building.

Thankfully, he was arrested before harming any miHoYo employees or himself.

MiHoYo are the developers of Genshin Impact and other gacha titles. The would-be attacker was allegedly spurred by a controversial event for miHoYo’s previous gacha game Honkai Impact 3rd.

News regarding the event was broken on Baidu by Red Star News, a Shanghai-based publication. They described the assailant as “a gangster who wanted to assassinate the two founders of the company with a knife.” The third-anniversary event featured characters dressed up in bunny suits performing synchronized dances. The update was available on the global server, but Chinese accounts were excluded from participating. Chinese fans quickly found out about the region-locked anniversary content and stormed miHoYo with complaints.

Some fans of the game were upset at being excluded from the anniversary event, while others in China and abroad disliked the Playboy-esque portrayal of the characters. 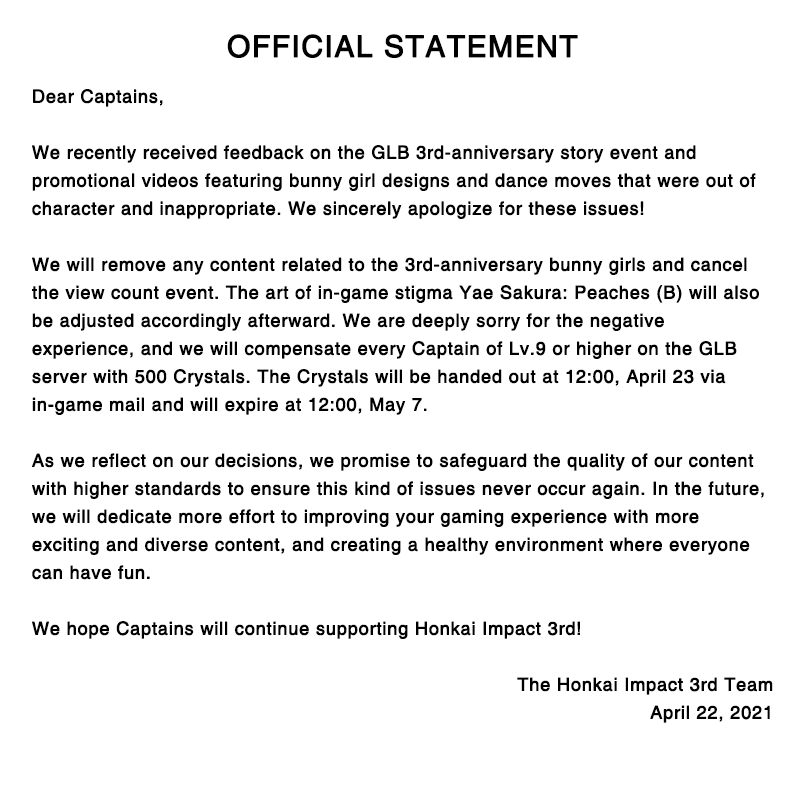 On April 22nd, miHoYo issued a formal apology to the community. They promptly removed or altered existing content and compensated players for the mishandling. In their letter, miHoYo described the bunny girl content as “out of character and inappropriate.”

Similar controversies have plagued miHoYo and other game developers in the past, but assassination attempts are thankfully very uncommon in the video game industry.