by Alejandro Sandoval
Learn all about the events that await you in Genshin Impact update v1.5 and get lots of rewards. Genshin Impact developer miHoYo has finally revealed all the info around Update 1.5 known as “Beneath the Light of Jadeite”, bringing a lot of content such as characters, weapons, new mechanics, quests, and more.

Now, we will review all of the special events that will be part of this new update, along with some gameplay details and rewards that await you.

In this event, a Sumeru researcher will ask us to gather Irminsul Fruit Fragments, trusting us with a mysterious ancient relic, the Energy Amplifier. With this relic, you can unleash the power of the Fragments you collect, granting some effects in combat. 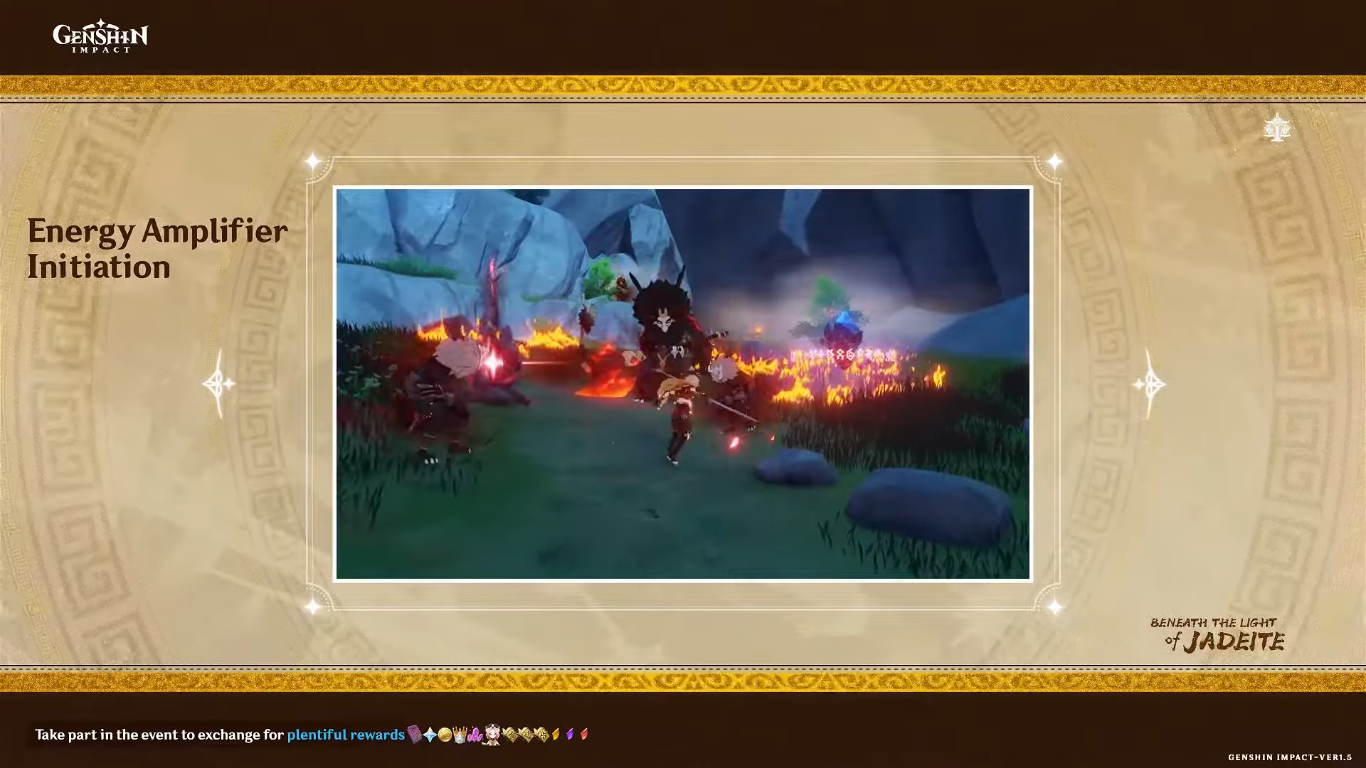 With a higher Motive Force, you will be able to equip more high-quality Fragments to strengthen your team. In case you don’t have high-level characters, you can borrow up to three characters from your friends to increase your Motive Force. 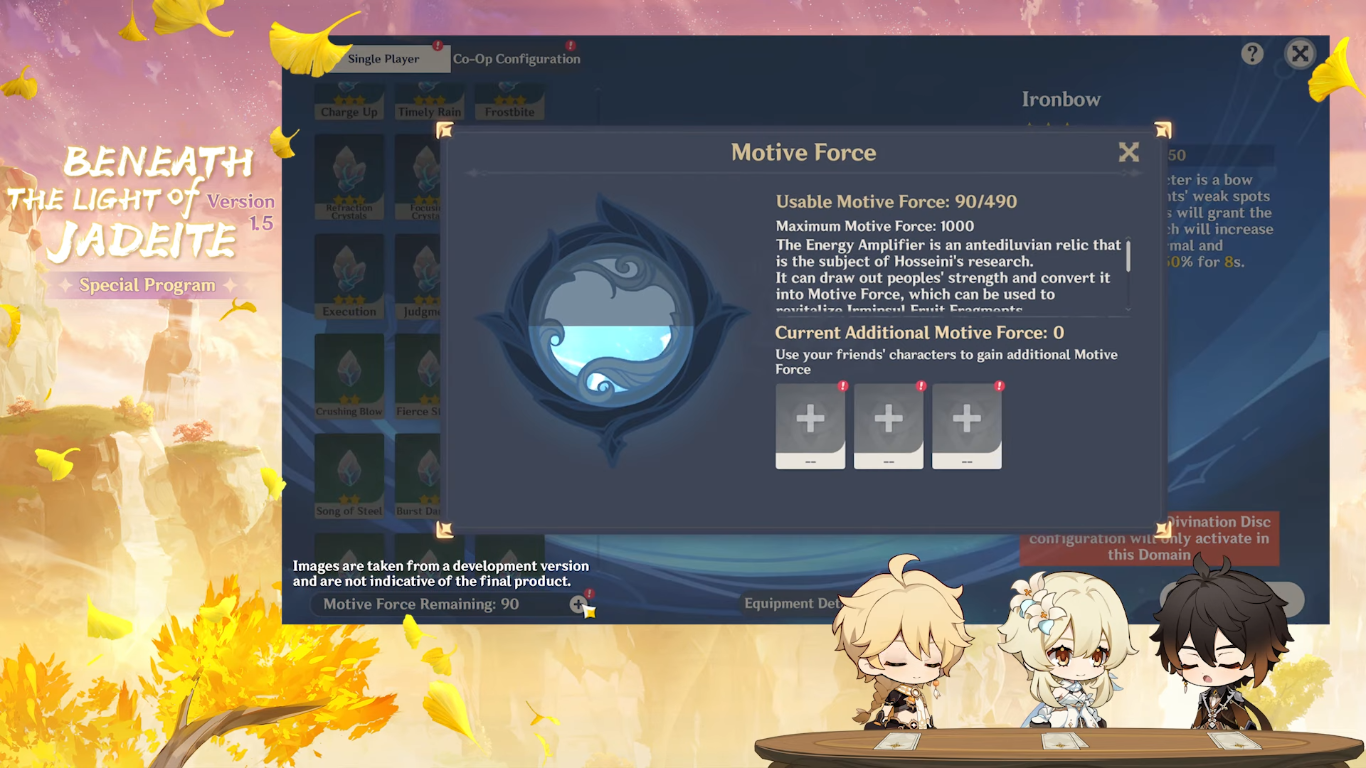 To collect Fragments, there will be plenty of them spread all over the map, mostly in Places of Interest throughout the open world. However, these Fragments will have many enemies around you have to get rid of, to be able to collect them.

At the later phase of the event, you will gain access to the Twisted Realm, having four Domains with different bizarre twists. You will be able to select the difficulty and conditions for the domains you enter, with the most difficult ones having better rewards. 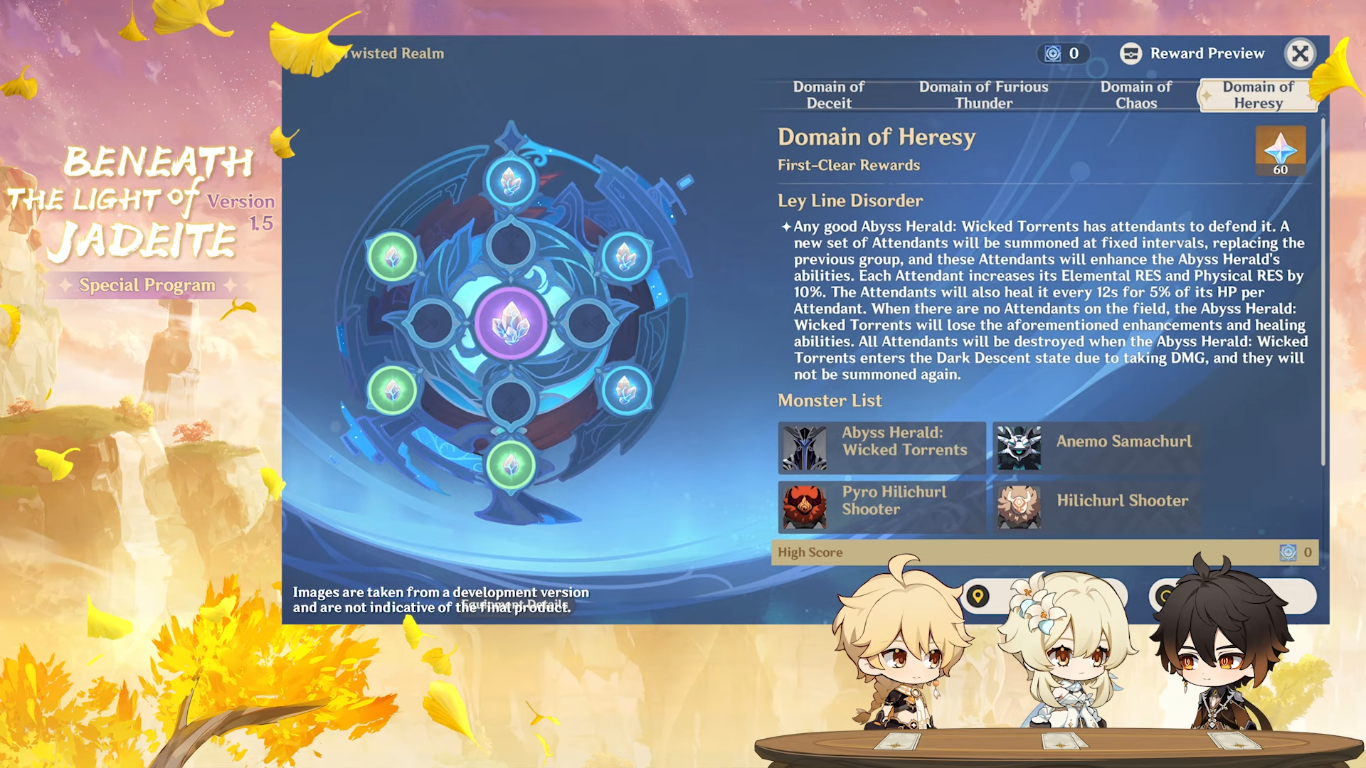 For each Fragment you collect, you will also get Fractured Fruit Data which can be exchanged for many rewards in the Event Shop, including a contract with Diona, the bartender of Mondstadt

In this event, there will be six themed trails to complete, but you can only use characters from a set pool specifically for the event. During these trails, your team will not be able to form Elemental Resonances, and food and potions in your inventory will not be accessible. 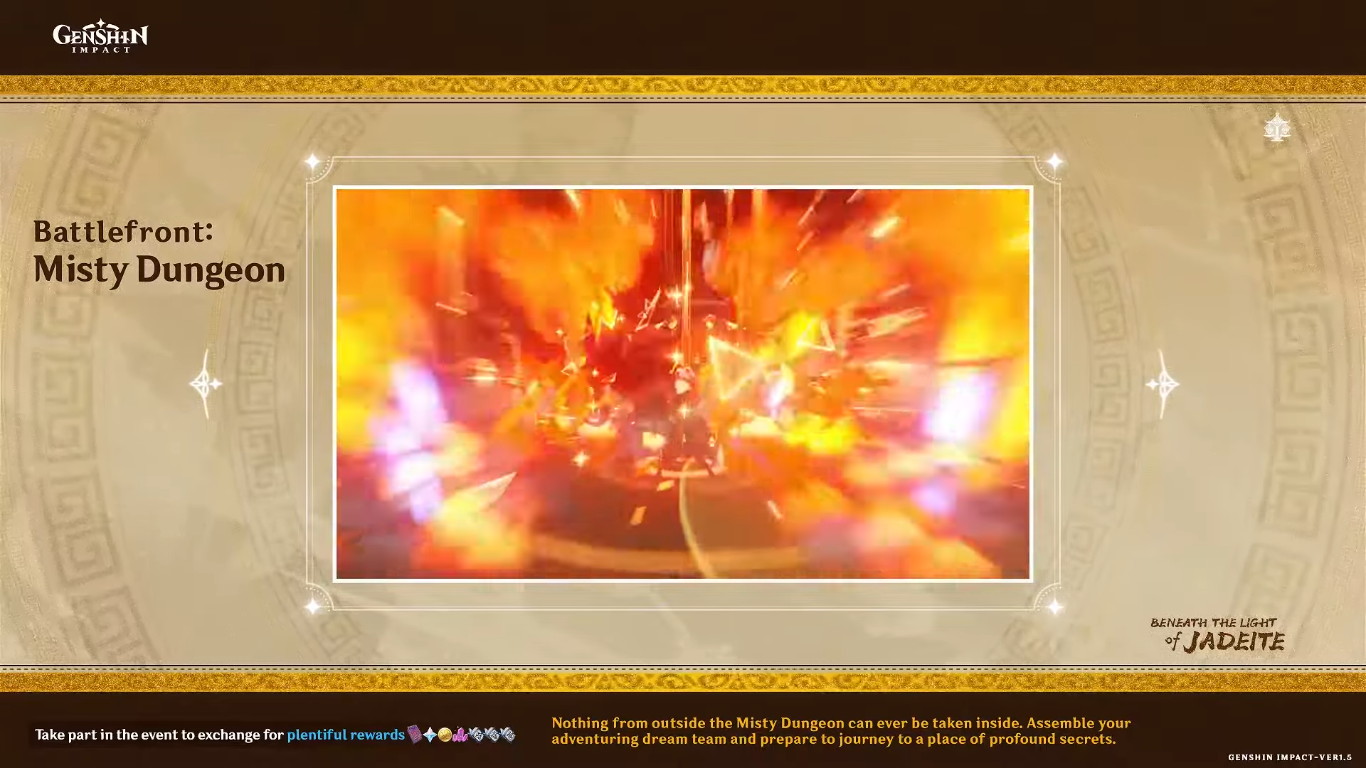 Before each trial, you will get the chance to preview the monsters you will encounter, as well as some tips and tasks to do, so you can choose the characters that better fit the conditions of the trial.

To complete each trial, you will need to activate all three Ancient Runs within the time limit, to gain access to the Final Challenge. Around the trial, you will find Benediction mechanics which allow players to obtain certain bonus effects and make it easier to complete them. 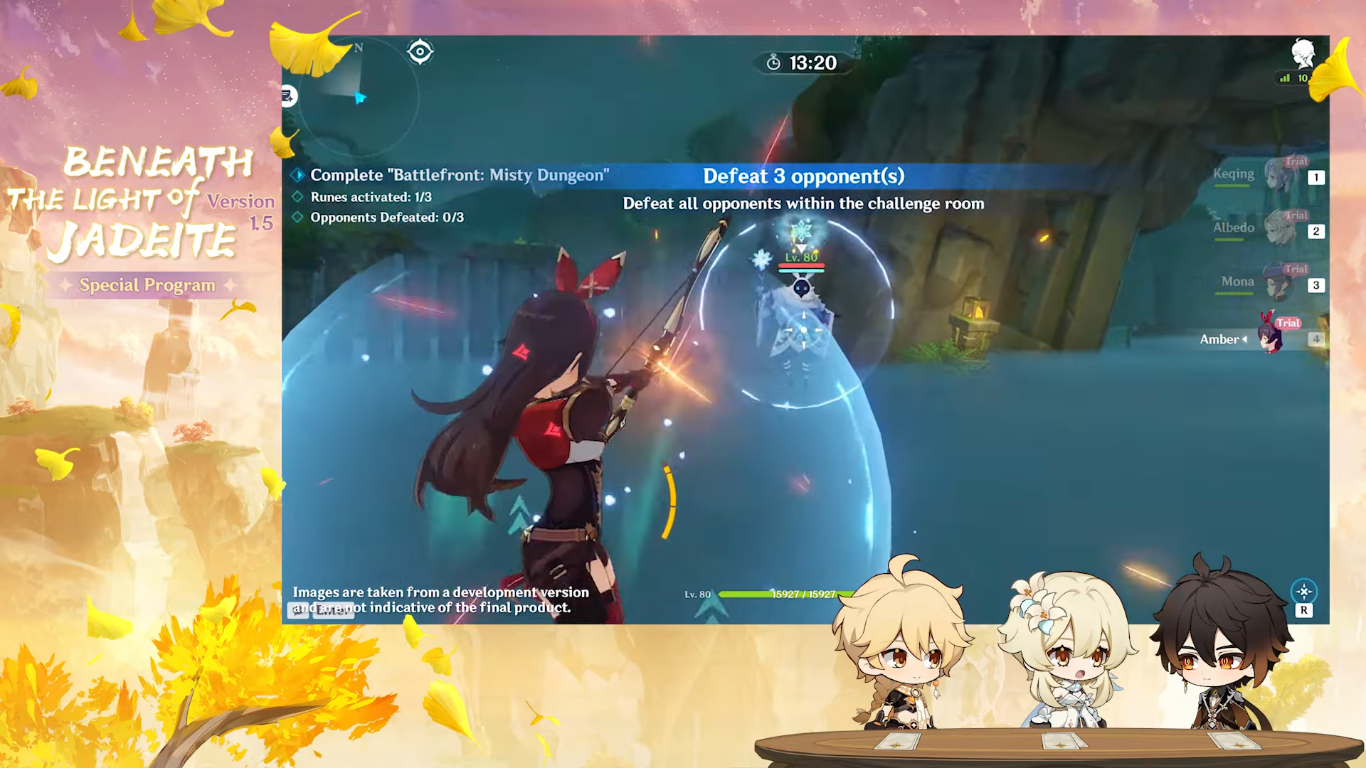 At the same time, there are also some automated weapons systems that will detect and attack any intruders. To deactivate them temporarily, you will need to use the appropriate elemental reactions on these.

Completing these trials, you will obtain rewards like Primogems, Mora and other materials.

This event will be about an unusual Hilichurl you will find in certain locations. This Hilichurl has been stirring up trouble on the merchant routes, so you will have to teach it a lesson. 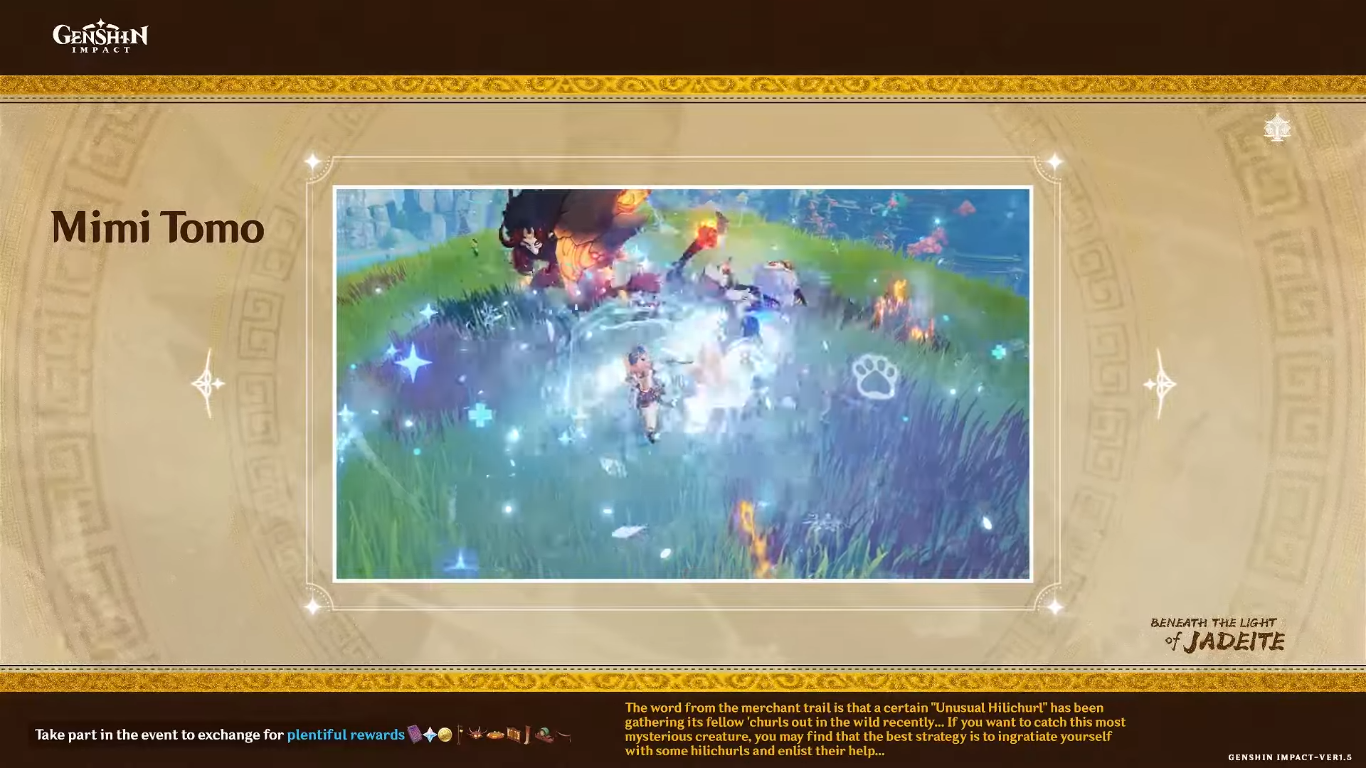 By talking to them, you will know any request the Hilichurls have in their native language, so you will have to use the Handbook to complete them, although sometimes you will have to fight against them. 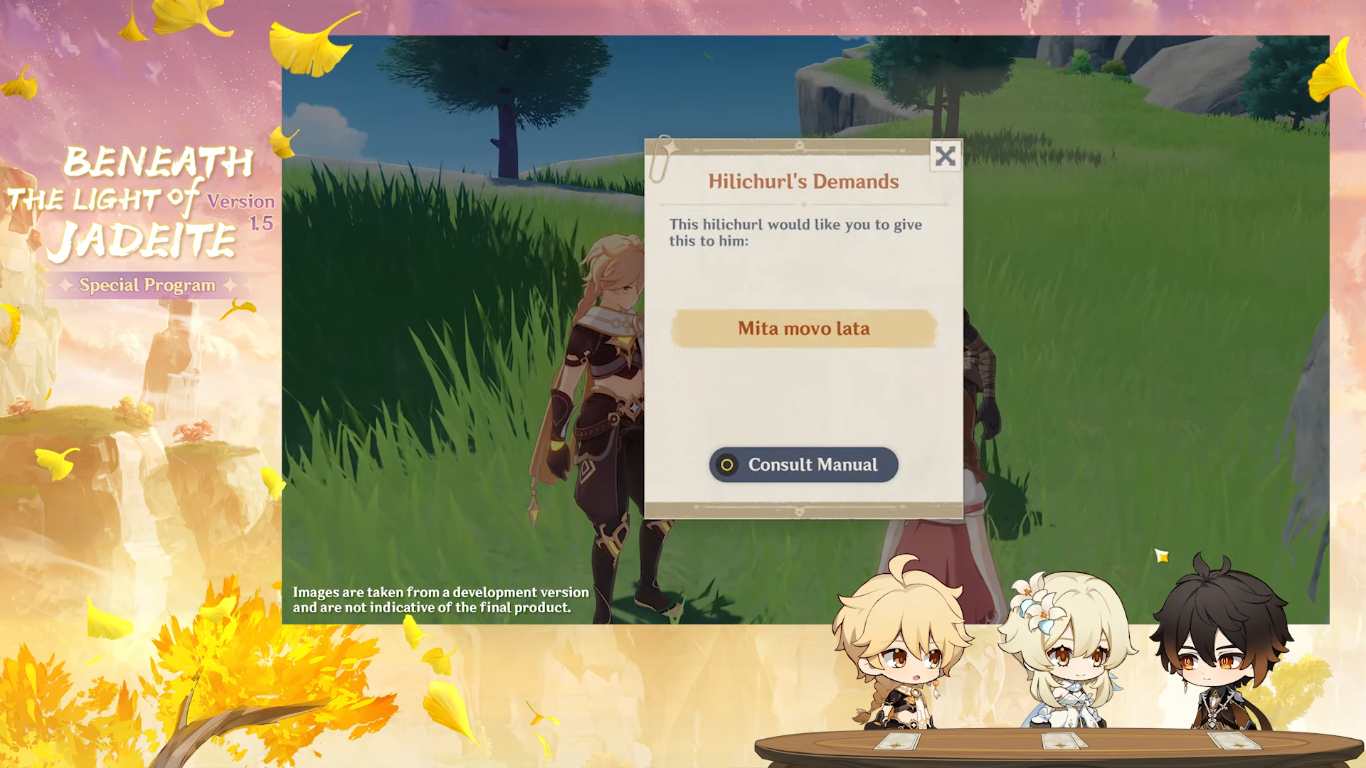 Completing this event you will get some rewards, but also the Liyue-style Furnishing Blueprints, with which you can build decoration for your Realm Within using the Serenitea Pot.

This event will bring a new minigame, which will consist of two teams separated in Contested Zones. These will be allocated on one of two sides: the Hunter or the Rebels. The objective of the Hunter is to find all the Rebels like a hide-and-seek game, while the Rebels have to hide until the time runs out. 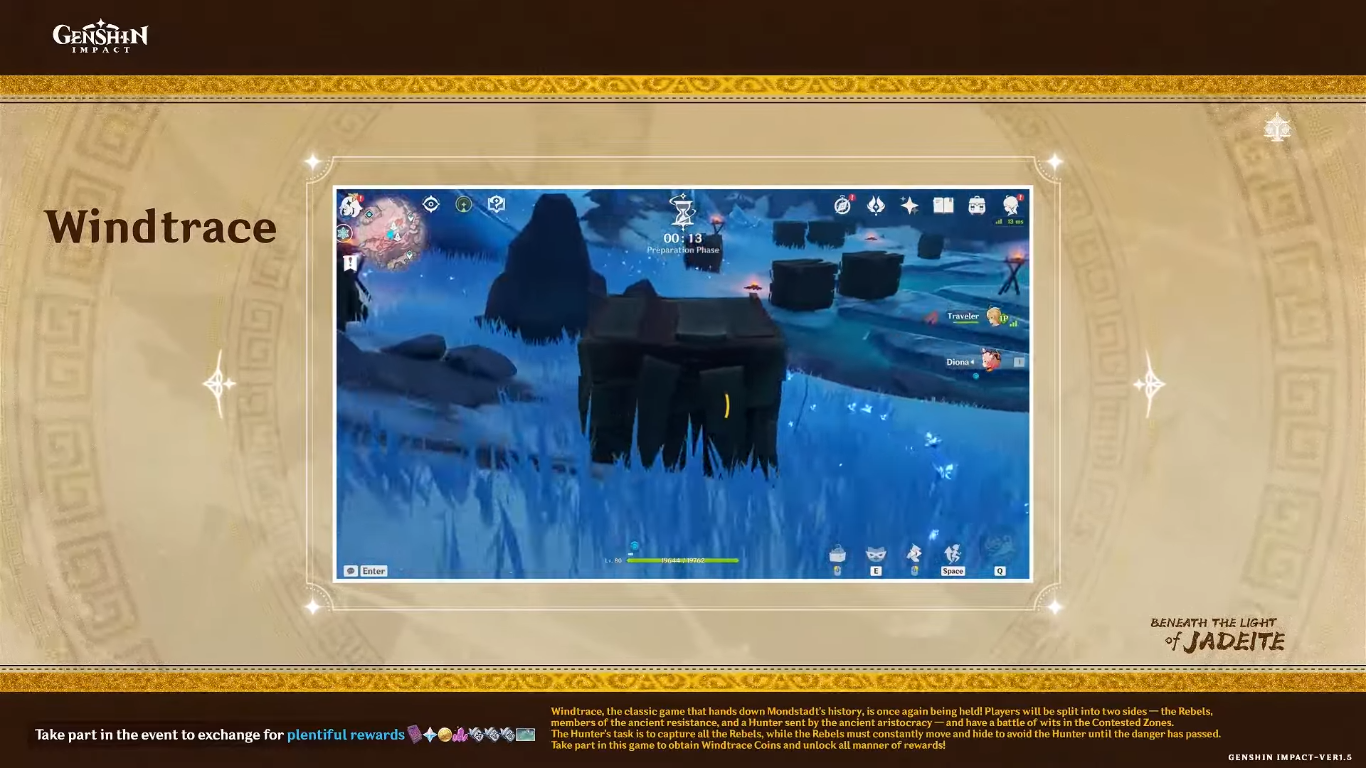 The Rebels will be able to use Windward Arts to disguise themselves, place the bait, or temporarily enter a hidden state, while the Hunter can use various Arts to detect the location of the Rebels and disable their tricks and disguises.

During any game, some Favors will descend upon the place which, if you can collect them, will charge up your special Secret Favor. 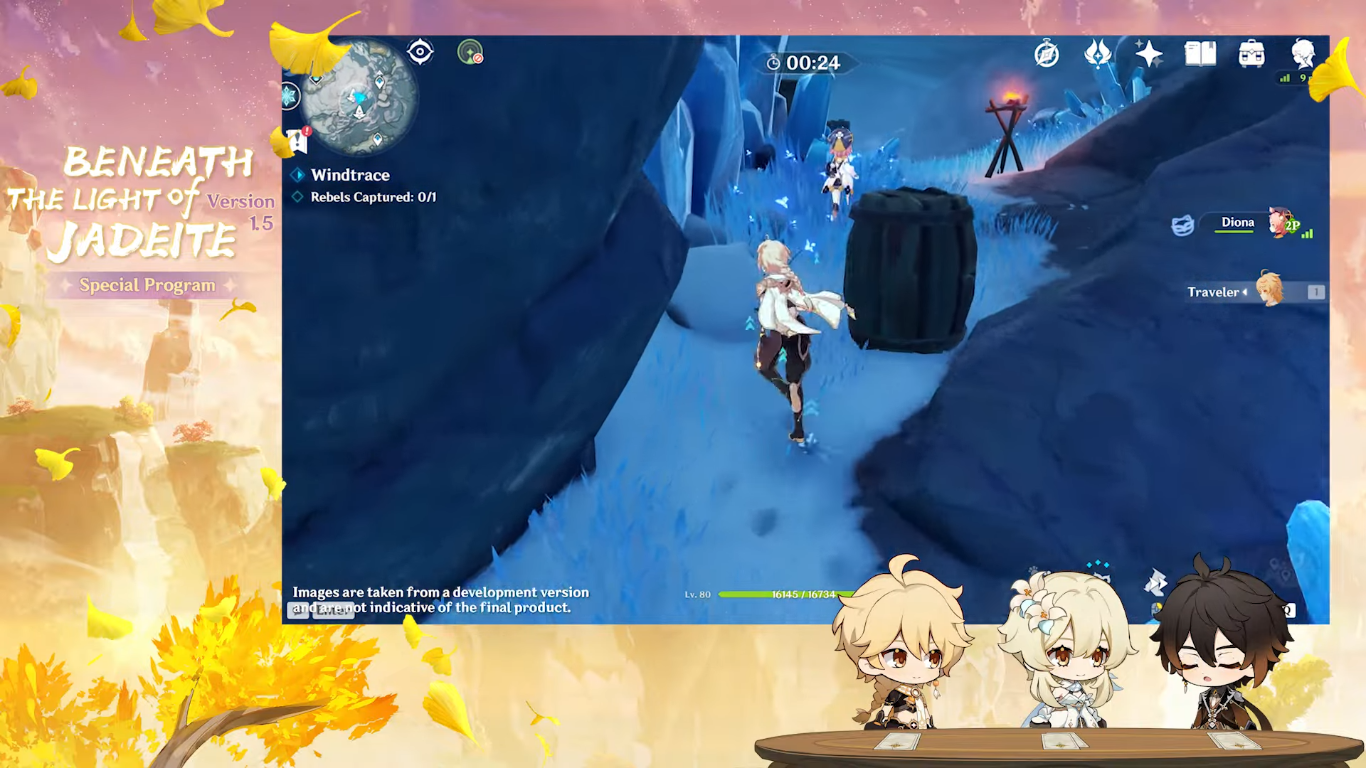 At the end of each game, players will obtain Windtrace Coins that can unlock a variety of rewards, including a Windtrace themed Namecard. But if you play with friends in Co-Op mode, or reach the daily limit, you won’t be able to gain any more.

During this event, you will have three chances daily to collect double rewards using Original Resin from selected Domains of Mastery, also being the first time you will be able to get double Talent Level-Up materials. 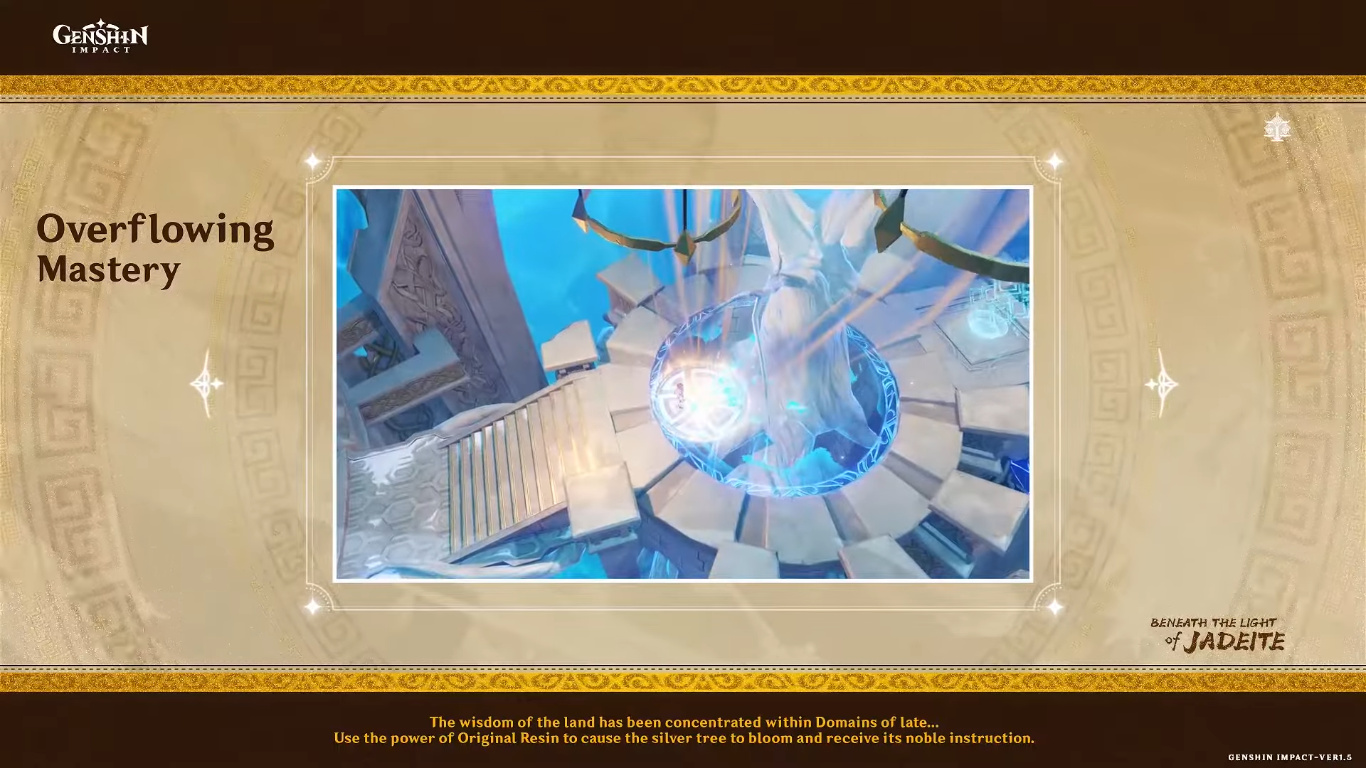 All the dates and more details about these events will be announced later, while all of these will be available with Genshin Impact’s Update 1.5 starting on 23rd April.