by
Sam "Initia1ise" Hapgood
To celebrate 10 years of League of Legends World Championships we countdown the 10 most incredible moments from the history of the esport. Worlds has come a long way from its humble beginnings, and we look back over its 10-year history to pull out some of the most iconic moments from across the tournament’s storied past.

Season 1 -  “The Arrow Heard Around the World”

One of two insane Ashe plays on this list. They may have lost the finals, but Against All Authority’s Yell0wStaR hit the most incredible base to bot lane arrow to secure a game win against Fnatic. It’s no surprise both he and sOAZ would later join the organisation after impressive showings like that.

All the world on one arrow, indeed - just check out the 2016 Worlds track “Ignite” to see the play immortalised in style. Moscow 5 were the most dominant team in the world, only contested by Azubu Frost. The Russian wonder team - later to be known as Gambit - had been tipped to win the championship, but had their run stalled by little known team Taipei Assassins.

A game one victory in dominant fashion by M5 was quickly turned around and into one of the greatest underdog stories in League history.

TPA would go on to win the Season 2 World Championships defeating both Moscow 5 in the semis and Azubu Frost in the finals. Not bad for a team no-one had heard of.

While Faker and SKT (now T1) might be household names now, in 2013 the team still had everything to prove.

Having dropped their first game to the LPL’s Oh My God in the group stage, SKT decided it was time to show the world exactly how good the Korean titans were. In their rematch, SKT managed to push through three turrets in mid and take the inhibitor all in one push. Oh, and they did it 12 minutes into the game. OMG didn’t know what hit them as pick after pick facilitated the SKT steamroll down mid, coupled up with clean use of Elise’s rappel and spiderlings to tank and juggle tower aggro.

There have been faster wins at Worlds since, but this remains (to our knowledge) the fastest inhibitor take ever at a World Championship.

This one isn’t a play. Maybe it should be - there are certainly enough - but that would mean passing over one of the most iconic moments in League history.

2014 was the pinnacle of Korean dominance. Sightstones, discipline, and sister teams were the watchwords for the OGN, and no organisation exemplified this more than Samsung with its rival teams of White and Blue.

Samsung Blue had won the OGN Summer Split and seemingly had the stylistic edge over their sister team with their slick mid-game teamfighting led by the “General” Dade from the mid lane. Samsung White on the other hand were considered the strongest team in the tournament - and arguably ever - with an incredible early game but suspect decision making post-25 minutes. That, and an inability to get one over on Samsung Blue.

That’s what makes this special - iconic. Dade, the General, hands over his signature jacket to his victorious opposition in Pawn. Having defeated their demons in the semi-finals, Samsung White would go on to win the Season 4 World Championship. And Dade’s jacket? Forever immortalised in game - did you think SSW Talon’s jacket was just for style points?

Things looked dire in the middle of the fight for Fnatic, but a flash Qi-burst back out from under tower nets Huni kills on the jungler, support and top laner, turning the whole play around. Animation cancels, quick fingers and a perfect re-engage make this one of the all time great Worlds plays. It’s only made sweeter by the choicest of voice breaks from Phreak.

You all know the one: PraY hits one of the most pivotal arrows of all time in what is widely considered the greatest series ever to be played.

The Season 6 SKT vs ROX semi-finals deserves its own lengthy article - the rivalry, the Miss Fortune support, the first time Nidalee clutch victory - but for now, this will have to do:

Recently voted as the greatest Worlds play of all time, SKT’s miracle comeback against the LPL’s EDG was a wonder to behold.

After more than 700k votes during the bracket, here is YOUR Most Memorable Play in Worlds History:

Wolf’s flash engage on Rakan, into Huni’s Cho’gath silence, into the mother of all Shockwave’s from none other than Unkillable Demon King himself helped turn around a 10,000 gold deficit for SKT versus EDG. This may not have been SKT at their most dominant, but the magic was still there.

For bonus value, check out the Spanish language broadcast’s Ibai making one of the most famous casting calls of all time:

After more than 700k votes during the bracket, here is YOUR Most Memorable Play in Worlds History:

Would this be a “best plays of all time” list without a base race? While all eyes were on LPL first seed Royal Never Give Up who were looking to complete the “Royal Road”, it was dark horse Invictus Gaming that would eventually prevail in the 2018 World Championships. To get there though, they had to go through the LCK’s best hope in KT Rolster. On the verge of the cleansweep in Game 3, KT Rolster held on by the skin of their teeth in one of the closest base races ever in League of Legends. Cue the clean split screen from production to make this play all the more tasty of a viewing experience:

Tian ran rampant in the 2019 World Championship, and his Lee Sin was a terror throughout the tournament. There was a reason FPX’s star jungler ended up with a skin for the Blind Monk.

A Ward-hop, flash kick to interrupt Perkz’ TP via Jankos who was attempting to body-block is some impressive in-the-moment problem solving.

It earned Tian and FPX the baron and a Game 1 victory in the 2019 Worlds Finals - a series they would go on to crush 3-0.

In G2’s quarter-final victory over Gen.G, Caps pulled out all the stops and put on his dancing shoes to slaughter his opponents on Sylas. 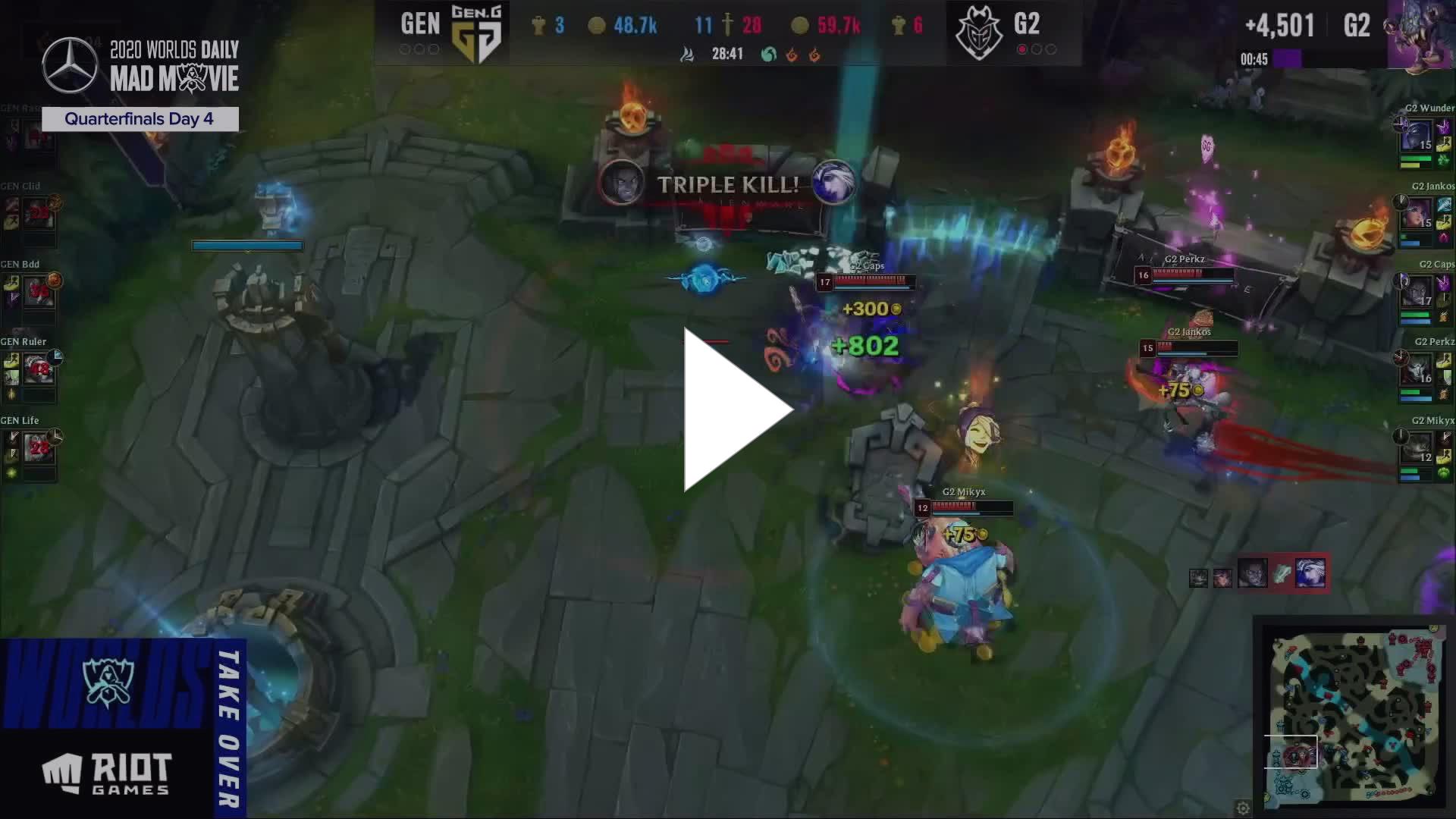 The play is made all the more impressive to watch thanks to the incredible production from the Korean broadcast. Sweeping cameras and epic music choices are all peripheral to the play itself though, that sees Caps fall down to sub 10 hp multiple times as he pushed the champion to the absolute edge of its capabilities.

NO JUMPING INTO THE POOL ðŸš« pic.twitter.com/YXnEcyTtoS

The 2020 World Championships will conclude on Saturday, 31st October at 10:00am BST. Tune in, get appropriately festive, and see how many more awe inspiring plays will be contending to join this list next year.