by
Sam "Initia1ise" Hapgood
DAMWON Gaming will take on Suning Gaming tomorrow to see who will be crowned the Season 10 World Champions. With everything on the line, we dissect each team’s chances of lifting the Summoner’s Cup. Published on October 31st, 2020
The Worlds 2020 Finals are upon us, and it is not a match-up many would have predicted prior to the tournament - part way through the tournament, even. But as the dust has settled, it is the LCK’s DAMWON Gaming and the LPL’s Suning Gaming that remain as the last two teams standings.

Only one will Take Over.

The semi-finals were… tumultuous, specifically in how teams turned up on the day. DWG dispatched G2 with relative ease outside of a sloppy Game 2, and Suning likewise took down TOP Esports in confident fashion on their side of the bracket as well.

Check out the top 5 plays from the #Worlds2020 Semifinals in the newest edition of The Penta! pic.twitter.com/zTYLBjTcyp

Both were clearly the better teams on the day, both had a strong grasp on how they wanted to play the game in the current meta, and both exposed the flaws in their opposition's playstyle.

Now we have to ask, will they be able to do the same here in the World 2020 Finals? The perpetual underdogs. We may have tipped them to win in their semi-finals, but many analysts and fans around the globe have sided against Suning through their entire run to the finals.

And who can blame those Analysts? JDG were one of the most cerebral teams in the LPL who had won Spring and were a game away in Summer. Suning dispatched them anyway. TOP Esports were one of the major pre-tournament favourites, were bringing the alleged second coming of Faker in Knight, were the reigning LPL champions with some of the most incredible mechanical players in pro-LoL. Suning felled them 3-1. This team has lived and breathed defying expectations.

It comes as no surprise then that SN are once again seen as the underdogs. But that’s not to say they have no bite - on the contrary, Suning’s strengths may prove to be DWG’s undoing.

Suning look to Bin for win

Suning’s win over TES was backed by a number of things, but one of the flashiest was an absolutely dominating performance from Bin in the top lane. His Jax in particular put 369 and TOP in a very difficult position, and we were left squirming in draft trying to find an answer to Bin’s infamous pocket pick.

Suning’s heavy focus into enabling Bin proved to be one of the key factors in TES’ undoing in the semis, and potentially an avenue they could look to retread against DWG. There are still two problems with that: one). Nuguri has proven he has a champion pool wide enough to arguably contest Bin’s Jax priority (Lulu, Fiora, Kennen, Ornn, Camille… the list goes on), and two: Bin doesn’t play Ornn - and by all the heavens, Nuguri certainly does.

Bin is 1:5 all-time on the champion, and Suning’s highest ban priority at 80%. If Bin can’t get the Jax to work, and can’t confidently contest the Ornn, Suning may find themselves in a challenging position in draft.

SofM has proven his versatility

Eyes also have to turn to SofM, the Vietnamese superstar in the jungle. He was already tipped to have an edge over Karsa based on the aggressive-farming style of the current meta, and while he did largely come out ahead in the jungle, it was with a very different style to what was anticipated.

River Shen and Jarvan IV were SofM’s picks of choice, with a gank and teamfight heavy priority that was all around setting Bin up for success in the side lane and abusing the likes of cataclysm at objective fights. SofM was still a focal point, but it was a more “traditional” jungling style of transferring his pressure to his laners rather than vice-versa.

It ran decidedly counter to the assumed meta of Lillia, Graves and Nidalee, but it was entirely reminiscent of the LPL’s love of teamfighting. No LPL team who makes Worlds can do so without being damn good teamfighters, and it offers another look to SN who may otherwise have been running the risk of being a touch one-dimensional.

As for the rest of the map, Huanfeng and Angel have continued to impress, and largely stepped up to the plate in the face of their elite opponents. Huanfeng’s Ezreal toed the line where JackeyLove’s overstepped looking for the killer play, and where Knight stepped back to the Orianna, Angel stepped forwards on the aggressive Akali.

That’s not to say it was a poor performance from Knight, but it was quiet. Angel’s was anything but. That attitude is a must when it comes to facing up against a team as disciplined and clean as DWG.

SwordArt in 2020, a step away from winning it all. pic.twitter.com/hH1B9AdKFJ

That leaves SwordArt, who had the most mercurial performance hitting both clutch Leona ultimates, and also finding himself isolated on inopportune roams. Cast your eyes over to how Mikyx was crucified versus DWG doing similar things, and that could prove to be a serious red flag to the LPL hopefuls.

If Suning are to come out on top, they will need Bin to reprise his semi-finals performance and work as inhumanly hard as possible to facilitate SofM in the jungle. With their opponents being Nuguri and Canyon, that could prove a mountain too high. The last remaining pre-tournament favourites. DAMWON represent the restored pride of Korea in one absolute machine of showmanship and discipline. It has been three years since the former LoL overlords were in a finals, and now DWG have made it they want to do their region proud.

They’re a confident lot, are DWG. “I want to crush G2 into pieces as fast as possible,” were ShowMaker’s exact words going into the semi-finals. Turns out he and his team could back them up as well. They handily took the series 3-1, with the last game claiming the record for fastest game at Worlds of all time. Game time hadn’t even hit 19 minutes. 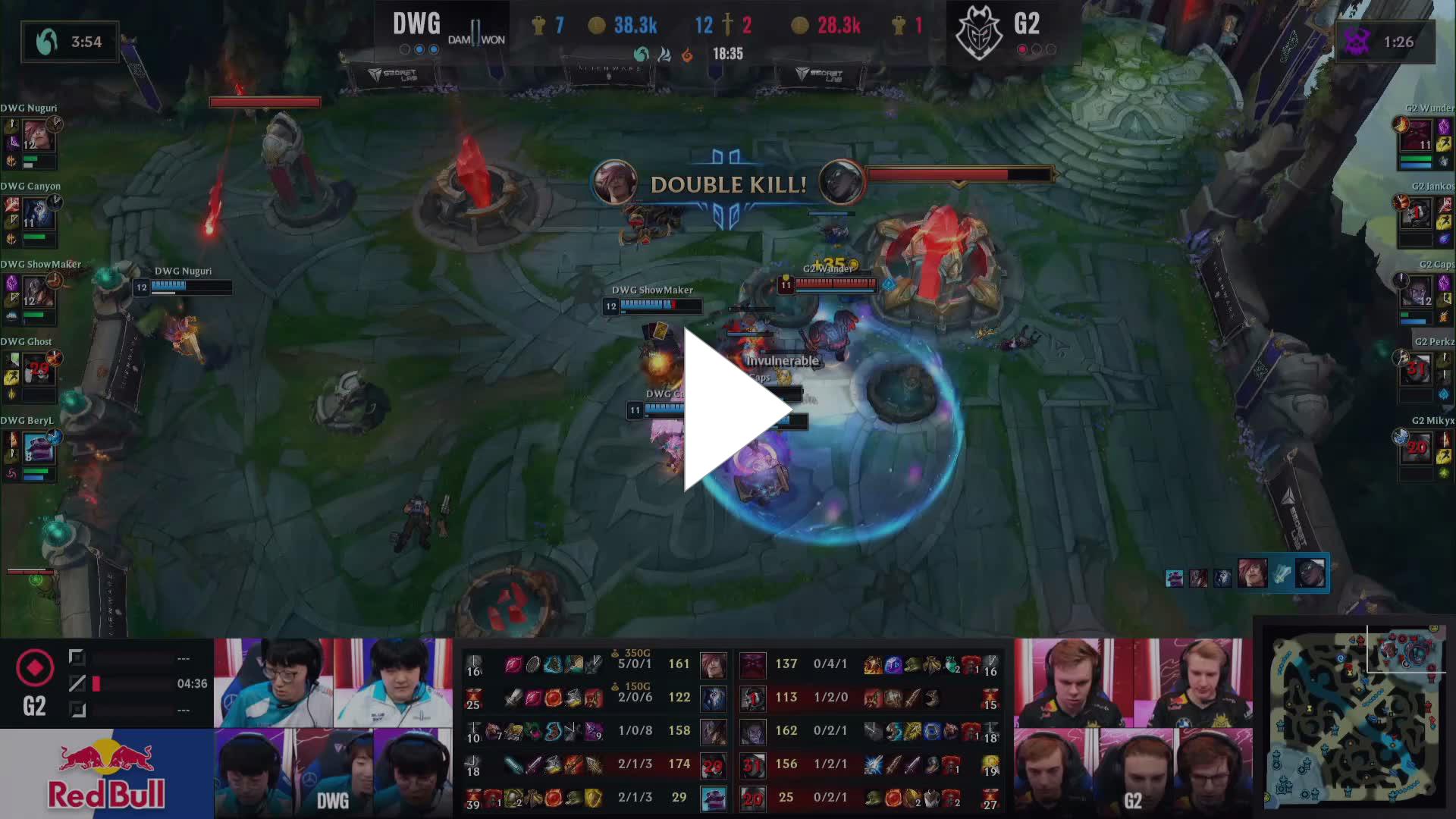 The vision to reach the top

That level of dominance was fueled by, yes, exceptional play from DWG, but the unsung hero has to be the LCK first seed’ exceptional vision play. G2’s traditional early to mid-game roams were consistently tracked and consistently punished - particularly by BeryL, who caught Mikyx awkwardly mid roam on a number of occasions.

Add in a commanding performance from the DWG solo-laners and Canyon’s consistent excellence and G2 looked lost. ShowMaker in particular took Caps’ to task, solo-killing him on Sylas in and out of lane - something that Caps’ had being doing to the rest of the field across the tournament. He may have thrown a few choice emotes out while he was at it, too…

Welcome to the show:

Take a closer look at ShowMaker's Sylas from the #Worlds2020 Semifinals! pic.twitter.com/y9ve7gWBhb

Nuguri too had a strong performance on his more teamfight focused picks, a role he’s been touted as the best in the world at. As mentioned before, his strength on Ornn could well be a boon in draft versus Suning who have not managed to leverage the pick’s strengths… as long as he can deal with Bin’s Jax.

And that brings us to the Fiora game. Great CSPM, strong laning, solid side lane pressure… horribly punished overextending and ended up 0/7/1 after the rest of the map fell apart. It was G2’s one victory, and if Suning can engineer a way to force Nuguri into one of those more volatile matchups, or push Bin to a lead on Jax versus Nuguri on something teamfight oriented, then there may be a window for the LPL representatives.

The problem is, Nuguri cut his teeth as a Klepto-Cull “I will beat you in lane in any matchup” player, who was notorious for absolutely dominating his opponents… or ending up 0/7/1 on Fiora.

It’s all well and good throwing down the gauntlet, but what happens if Nuguri picks it up and takes your jaw off with it?

Canyon is the cherry on top The other X-factor is of course DWG’s machine in the jungle, Canyon. There are vanishingly few stats this man isn’t the tournament leader for in jungle, and it has shown through in his play. While SofM pivoted away from the accepted tournament meta, Canyon has yet to be forced off it. His Graves has been fearsome indeed, and DWG have heavily prioritised getting their jungler onto the pick playing it for 9 out of his 13 Worlds games this year, but even when he has, the likes of his Kindred (yet to die), Nidalee and Hecarim have all been exceptional as well.

If SofM can find a way to pick apart the farm-heavy style of Canyon (perhaps by returning to more ganking/teamfighting options), then Suning will nullify one of DWG’s key win conditions.

A final thought must go to Ghost and BeryL, who have been the most unsung members of DWG. Against G2 they largely came out well ahead of their opponents, punishing Mikyx on Rakan and defending against G2’s roams very adeptly. Ghost’s ability to translate from being left on weakside while BeryL looks to roam and support Canyon, and come into teamfights online and read to deal damage is a credit to him, even if it isn’t usually flashy.

We said NO JUMPING pic.twitter.com/oPrPAUxOMh

The two best junglers at the tournament. SofM’s style, audacity and versatility have made him fans across the world, and has championed Suning to a World Finals. His opponent though is Canyon, who has been the single most dominant jungler at the tournament - decisive, adaptable and just plain good. Worlds Finals Start at 10am GMT 31/10 on the LoL Esports Website, or affiliated YouTube and Twitch channels.