Perkz: The role-swapping Samurai set to win Worlds 2019 against all odds

by
Phoebe Dua
From rising young star to experienced mid laner to Caps self-sacrifice in pursuit of success, Perkz is a European legend. With the Worlds 2019 final on the horizon, let's take a look back over the highs and lows of Uma Jan himself. Published on November 7th, 2019
The opportunity follow in the footsteps of a European League of Legends superstar, taking up his lane and mantle as mid laner for the organisation he founded is both incredible and intimidating.

Carlos "ocelote" Rodriguezâ€™s organisation put faith in a young mid laner called Luka "Perkz" PerkoviÄ‡. Replacing JÃ©rÃ©my "Eika" Valdenaire, Perkz came into Gamers2 as one to watch. His talent for the game was unquestionable, with the only real question being what he was capable of when opportunities were there to be taken.

Gamers2 is pleased to welcome @Jesizlol and @perkzlol to its League of Legends team http://t.co/zllMiRA3E4pic.twitter.com/HcccnhsS11

EUCS Summer 2015 saw Gamers2 storm the Challenger Series and go on to qualify for the LCS through 2016 EU LCS Spring Promotion. No one could have possibly predicted the rise that would follow for the now-rebranded G2 Esports and young Perkz.

Winning both Spring and Summer Split and their respective playoffs in 2016, Perkz was awarded the title of â€˜Outstanding Rookieâ€™ and placed in the second All-Pro Team in Spring. It was Giants Gaming's Gun-woo "NighT" Na that outplaced him by a mere two points, but neither he nor Giants had the titles G2 had claimed.

G2 were able to become the Kings of Europe under Perkzâ€™s lead as they won the following Spring Split and turned a second place place in the Summer Split into victory at the Playoffs with a 3-0 win over Misfits Gaming.

Worlds 2017 looked promising for Perkz, but in the end, defeats to eventual winners Samsung Galaxy and Royal Never Give Up saw them eliminated in the group stage.

Emotions ran high and the crowd supported Perkz as the elimination saw him shed tears on stage. Not just the weight of disappointment from the loss, but the knowledge that he would no longer play alongside the teammates he was there with.

It was known that the lineup had run its course and Kim "Trick"Gang-yun had already revealed his return to South Korea after the tournament. Changes were imminent for G2 before the final EU LCS in 2018 began and many waited with baited breath to see who G2 would sign to protect their dynasty.

Outside of Perkz, the entire roster was overhauled. Martin "Wunder" Hansen was signed from Splyce, Marcin "Jankos" Jankowski from H2k-Gaming and the duo of Petter "Hjarnan" Freyschuss and Kim "Wadid" Bae-in from Team ROCCAT would be the new foundations for G2.

There was a third addition from ROCCAT in the form of coach Fabian "GrabbZ" Lohmann, bringing a new voice to the G2 camp.

As the veteran and a proven mid laner at just 19 years of age, Perkz would be at the forefront of G2's new journey back to the top.

The 2018 season didn't get off the same dominant start for this lineup as Fnatic took the top spot with star Rasmus "Caps" Winther in the mid lane ensuring G2's crushing 3-0 defeat in the Spring Playoffs.

A disappointing Summer Split saw the EU Regional Finals as G2's only chance to qualify for the 2018 World Championship and an impressive Player of the Series performance by Jankos against FC Schalke 04 secured G2 a spot at Worlds, giving the team a shot at redemption and a chance to prove this roster could find as much success as previous iterations of the team.

Perkz featured in the music video for the 2018 Worlds theme Rise. As Yasuo, he is seen dueling Kang "Ambition" Chan-yong before the latter overcomes him as SSG did the previous year.

Battling through the Play-In and group stage, Perkz led G2 to the semifinal after huge performances in game four and five against Royal Never Give Up - the team that had topped G2's group back in 2017 and denied Perkz his chance at the playoffs.

Making it further than Ambition, Jian "Uzi" Zi-Hao and the legendary mid laner Lee "Faker" Sang-hyeok, Perkz was the last man standing from the video still in contention for the Worlds title.

As Cloud9 and Fnatic clashed in the semifinal, it would be Invictus Gaming that G2 would need to beat to make the final.

Matched in his lane against Rookie, Perkz struggled to have the impact he would hope for. Going 0-3-0 on Aatrox in game one was a worrying sign of what was to come.

Getting outplayed and making too many mistakes, G2 failed to get a single game in the semifinal and were sent home with a 0-3 result and wounded pride.

Caps was having an incredible tournament but the West's hopes died with him as iG were the ones to take the Worlds trophy for the LPL as the only non-Western team in the top four.

Going back to the drawing board, G2 were looking strong but were on the verge of potential greatness. Fnatic were the one true rival in the way of G2 reclaiming their European kingdom.

The solution was surprisingly simple.

If you can't beat them, buy them.

Willing to move out of his own lane to make way for his greatest rival, Caps took over as G2's mid laner while Perkz moved to the bot lane in a move that surprised the LoL community in November 2018.

Perkz saw the addition of Mihael "Mikyx" Mehle as a more than capable support to help him through the role change having overcome wrist issues earlier that year. The partnership between Perkz and Mikyx has been crucial to the success of ADC Perkz and G2 as a unit.

The gamble has paid off. G2 became the unstoppable force of Europe once more. Spring Split, the MSI Midseason Invitational and Summer Split were never in question: they were G2's trophies to take. Bringing down the juggernauts of SK Telecom T1 at MSI, it was clear G2 were not just the best in Europe but could well be one of the greatest teams ever assembled.

Worlds 2019 would be the ultimate test.

Qualification wouldn't be an issue this time around and G2 were drawn into Group A.

The group contained Griffin, the strong Korean challengers, Cloud9, hoping to go one further than their 2018 run and one of the four Play-In winners Hong Kong Attitude.

While G2 were still favourites in their group, Griffin showed their claws.

In the final group game, Griffin tore through G2 to force a tiebreaker for first place that they then also went on to win. 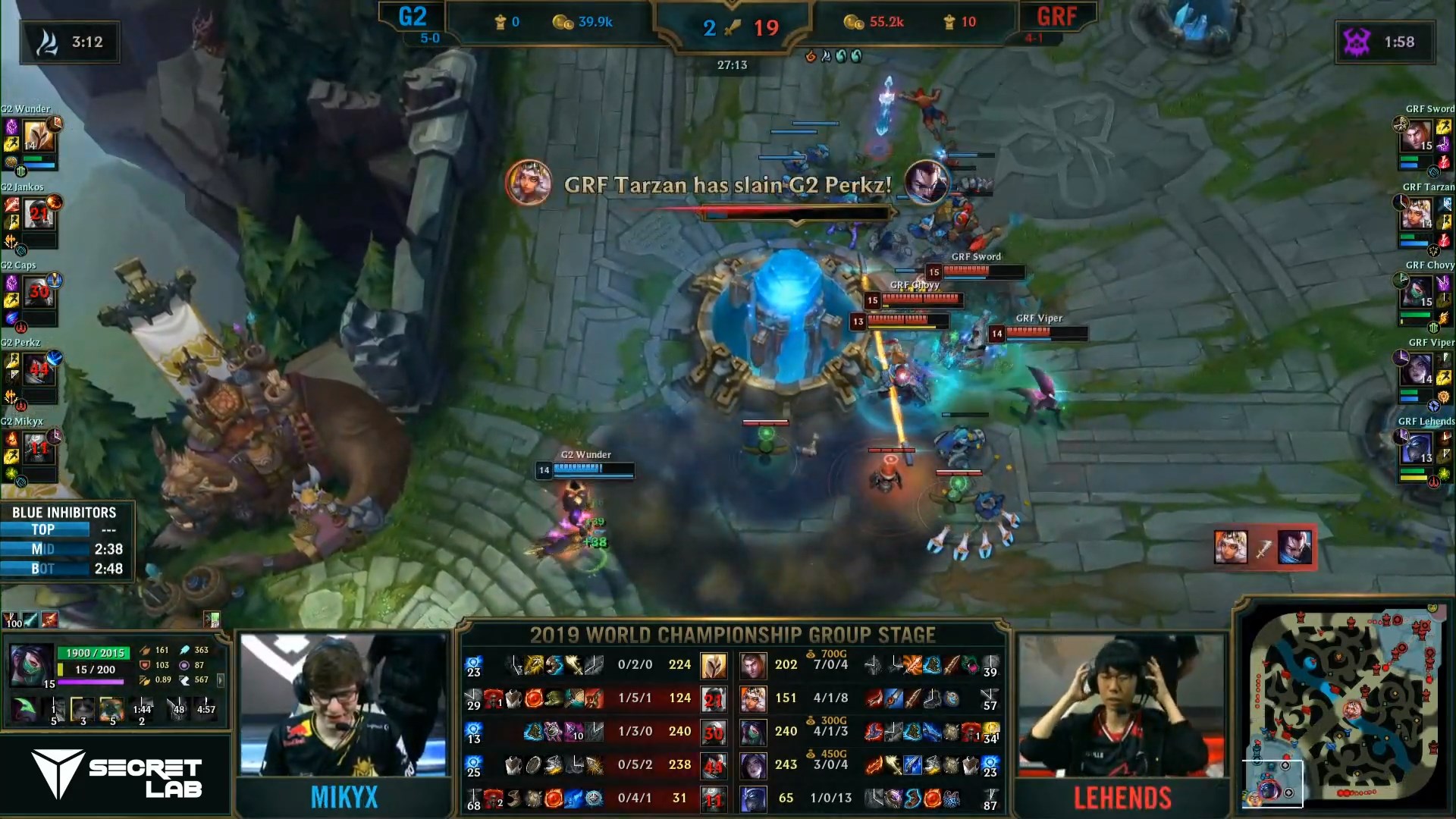 Second place in the group would be what G2 settled for in the end, but this draw saw them avoid reigning champions and the crusher of their 2018 dreams Invictus Gaming.

This turned out to be the frying pan, as G2 were instead flung into a bracket containing SKT.

DAMWON Gaming were their quarterfinal warmup ahead of a rematch with the legendary Korean organisation and the 'Unkillable Demon King' Faker.

While G2 had bested them previously, this match was expected to be a true clash of the titans and the European side were able to pull off the near-impossible.

Before SKT-G2, teams were 0-56 at worlds with no barons secured vs teams with 1+.

In that series, G2 went 2-1 & WERE THE EXCEPTION, NOT THE RULE. G2 deserve praise for doing that.

SKT took Baron in two separate games and G2 were able to capitalise, turn it around and win their matches while behind in gold, all while making it look simple.

Once again, the Koreans were bested by G2. This time, the scoreline was even more in favour of the Europeans who only needed four games to take the semifinal.

All that now stands in the way of a #G2WIN, a first Worlds title for Perkz, the first for Europe in eight years and the Grand Slam that has never been achieved in LoL history, is FunPlus Phoenix.

The underdog team of the playoffs have taken the scalps of both Fnatic and Invictus Gaming on their path to the final. FPX won't be too shy to take down the hometown heroes on their home soil to continue the streak of LPL victory at the World Championship.

On Sunday November 10th, the two teams will meet at the AccorHotels Arena in Paris in front of thousands of League of Legends fans.

Perkz will face his biggest challenge yet with the support of the best team he has ever had around him.

Can Perkz do it?

The simple response is that he has done everything else in his career. Why would Worlds be any different?