The end of an era - legendary organisation, Gambit, steps away from LoL

by
Sam "Initia1ise" Hapgood
Once the most dominant team in League of Legends, Gambit have made the call to leave the esport. It is a tectonic shift in League of Legends today, as one of the most extraordinary teams to ever grace the game has made the decision to step away from the scene. 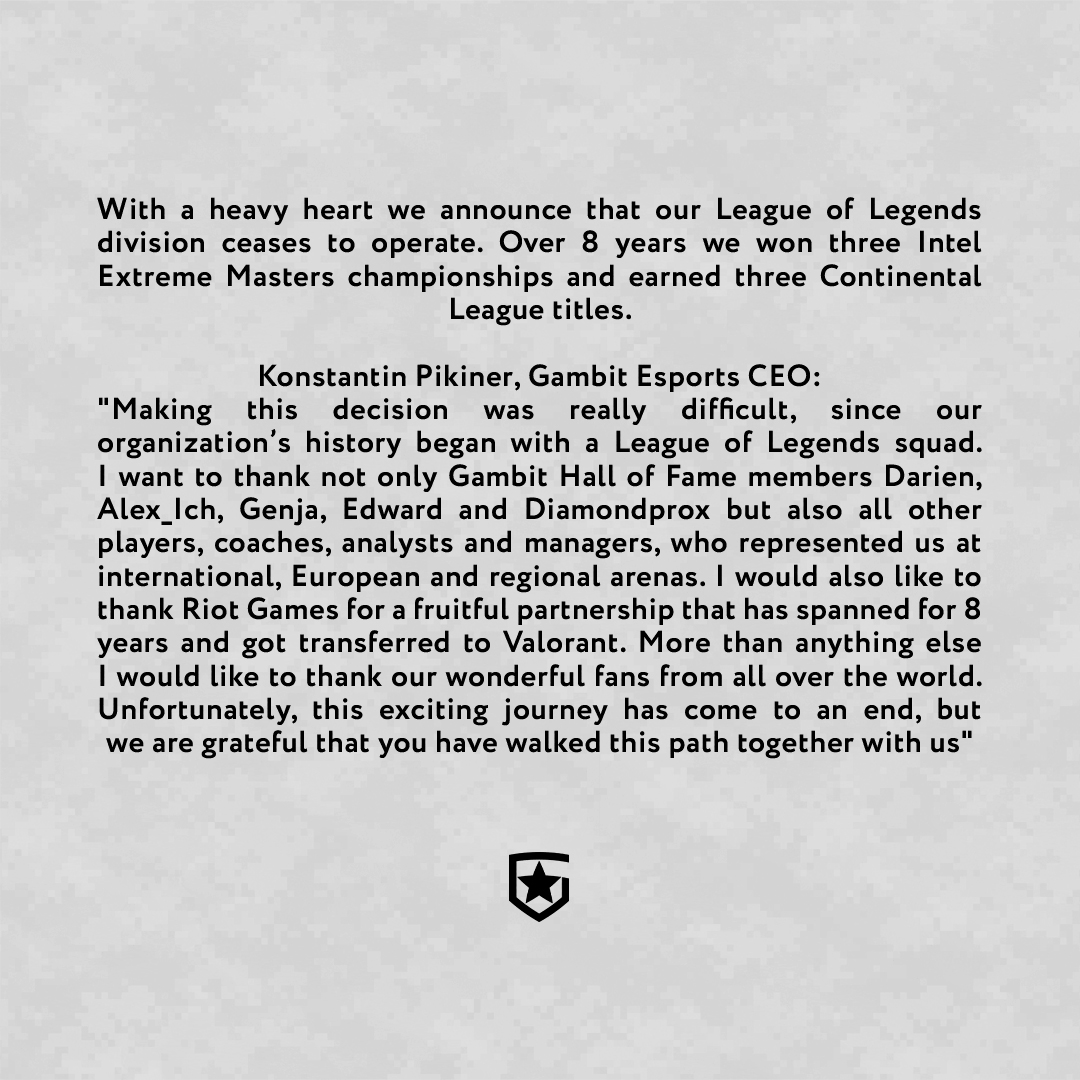 Gambit Esports on Twitter Today we close our League of Legends roster.We are grateful to the guys for victories under our banners and wish them success in the future âœŠðŸ» pic.twitter.com/i7j3iOwYWR— Gambit Esports (@GambitEsports) April 22, 2021 Gambit Esports Twitter

Once known as Team Empire, then Moscow 5, the iconic roster of Evgeny “Darien” Mazaev, Daniel “Diamondprox” Reshetnikov, Alex “Alex Ich” Ichetovkin, Eugene “Genja” Andryushin, and Edward “Edward” Abgaryan terrorised the international scene as not only one of the best European teams of all time, but one of the best teams period. Eventually picked up by Gambit, this legendary roster was notorious for their innovative, hyper-aggressive playstyle. So much so that it was said that if you hadn’t beaten them by 15 minutes, you’d lose by 20.

As a team, this roster won vast swathes of invitational tournaments, including 5 IEM events, and were considered the best team in the world heading into the Season 2 World Championships. That was no mean feat in an era of supreme Korean dominance from the likes of the Azubu and NaJin sister squads. While the Taipei Assassins won Season 2 Worlds (in shockingly dominant fashion), the legendary M5/GMB roster cemented itself as one of the most extraordinary teams ever. Before G2, Flash Wolves, or the giants of the LPL, Gambit were the original Korean slayers.

It wasn’t just international dominance that earned the organisation such regard, it was innovation as well. Edward (then GoSu Pepper) defined the idea of support carry, running Ignite and earning a reputation as the “Thresh Prince'' and coining old-school move dubbed “The Empire.” Diamondprox is in contention for the greatest western jungler of all time by virtue of pioneering counter-jungling. Alex Ich’s mid lane Kha’zix and Evelynn earned him a spot amongst EU mid titans Froggen and xPeke.

Alas, the iconic roster’s dominance began to wane with the inception of the EU LCS. Gambit did not live together or even in close proximity to one another. They had been used to coming together for intensive boot camps before events and then separating to live in various locations in Russia, which was impossible in the new weekly league format. Travelling to Germany for the games every week alongside difficult practice schedules marked the beginning of Gambit’s decline.

With Alex Ich’s departure in May 2014, the OG roster slowly broke apart, but the organisation stayed in the EU LCS until 2016 to mixed success despite a number of star players eventually joining the roster (Cabochard and FORG1VEN most notably). Team Vitality then purchased Gambit’s spot.

Since then Gambit has competed in the Russian regional league, the LCL, to significant success. Edward and Diamondprox reprised their roles on the team for significant portions of time, while also famously acquiring a number of Albus Nox Luna members, who notoriously made waves at Worlds in 2016.

After falling to perennial rivals Unicorns of Love in the most recent LCL playoffs, the decision has been made to back out of the LCL and LoL, thus closing the book on one of the most storied and beloved teams in League of Legends history.