by Andrés Aquino
After two decades, Kadabra could return to Pokémon TCG packs as magician Uri Geller has given the company permission to bring the Psyquic mon back. Published on November 29th, 2020
The Pokémon Trading Card Game craze has seen a bit of a resurgence lately. Not thanks to the gameplay side of things, which has always maintained a strong following, but rather due to streamers jumping on the pack opening and auctioning of rarer Pokémon TCG cards.

From Twitch personalities like Trainwreckstv and Mizkif to YouTube sensations Logan Paul or PewDiePie, Pokémon TCG unboxings have become a great source of content for all sorts of creators.

In said packs you can find a plethora of Pokémon with different versions printed -- of course, rare 1st Edition Pokémon TCG cards are expensive and highly sought after from collectors, and can sell for thousands of dollars. 1est edition cards are very rare and often worth a ton of money (Picture: The Pokémon Company)

One Pokémon that's been absent for almost two decades from the card game is Kadabra, the middle evolution in Abra's path to becoming Alakazam.

The reason? Illusionist Uri Geller prevented The Pokémon Company from printing any, as he didn't agree to his resemblance being used for commercial purposes.

Kadabra, originally named Yungerer in Japan, was clearly taking inspiration from the famous Geller, who decided to sue Nintendo, preventing them from using the Pokémon in the TCG moving forward. A deal that's been in place until today.

That's about to change.

Kadabra could return to TCG packs 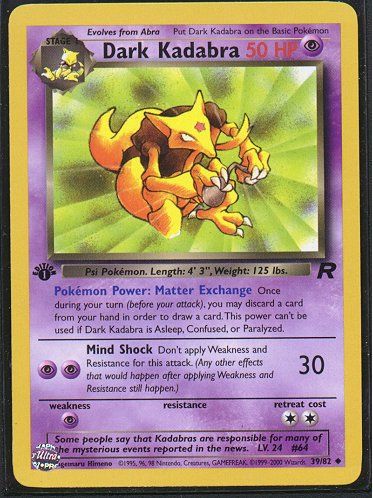 Kadabra cards have a ton of value for collectors (Picture: The Pokémon Company)

Soon after an article published by The Gamer revived buzz in Kadabra's appearance within the card game, Uri Geller himself made a statement via social media, indicating his change of mind by giving Nintendo permission to use the spoon-bender Pokémon once again.

I am truly sorry for what I did 20 years ago. Kids and grownups I am releasing the ban. It’s now all up to #Nintendo to bring my #kadabra#pokemon card back.
It will probably be one of the rarest cards now! Much energy and love to all!https://t.co/Rv1aJFlIKSpic.twitter.com/5zDMX5S8WA

"I am truly sorry for what I did 20 years ago. Kids and grownups I am releasing the ban. It’s now all up to #Nintendo to bring my #kadabra Pokemon card back. It will probably be one of the rarest cards now! Much energy and love to all!"

An Uncommon 1s Edition Kadabra costs around $280 in sites like Troll and Toad, so while not reaching crazy numbers, it's a hefty price for a piece of paper nonetheless, and we're happy Geller has had a change of mind, allowing fans to (eventually) get their hands on a Pokémon that's been absent for 20 years.