by
Daniel Conlan
Multiple teams had been disqualified from the opening tournament of Strike Arabia after it emerged they had played from Palestine.

Riot Games have confirmed that competitors though reside within the State of Palestine will be eligible to play in Strike Arabia (MENA) tournaments, starting with next month's Strike Arabia Championship. 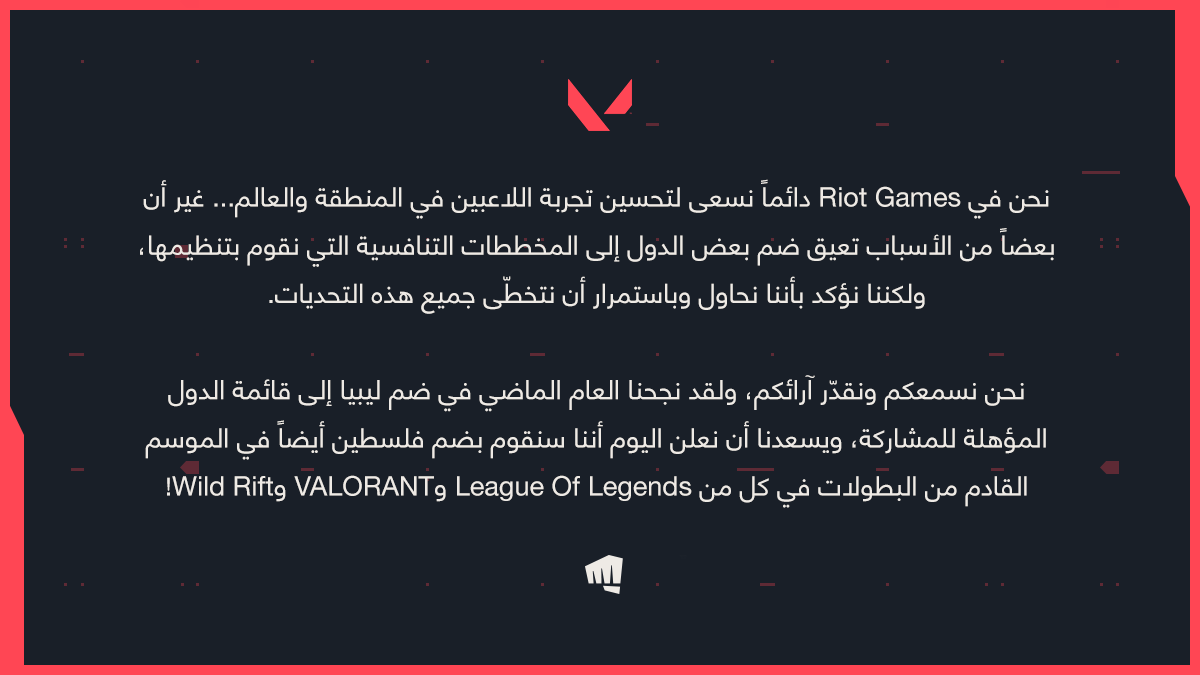 "We at Riot Games always strive to improve the experience of players in the region and the world ... However, some of the reasons hinder the inclusion of some countries in the competitive schemes that we organize, but we confirm that we are constantly trying to overcome all these challenges. We hear you and appreciate your opinions, and we succeeded last year in including Libya in the list of eligible countries to participate, and we are pleased to announce today that we will also include Palestine in the next season of tournaments in League of Legends, VALORANT and Wild Rift."

Palestinian eligibility had become an issue after a number of teams, including the First Strike champions, had been disqualified from Season 1 of the Championship after it emerged that they had been playing from Palestine, not one of the fourteen eligible countries. The State of Palestine was not included in the original 14 countries eligible to play in Strike Arabia. (Picture: Riot Games)

Speaking to GINX, Riot Games' PR & Communications Manager for MENA, Luciano Rahal, stated that Palestine's original exclusion was due to a number of factors related to maintaining competitive integrity with server infrastructure and population key concerns.

The Middle East and North Africa region counts approximately 20 countries and with Palestine's inclusion Riot will be allowing players from 15 to compete.

Still unable to are Syria, Iran, Yemen, and Djibouti, and if included in MENA, Ethiopia and Sudan.

Rahal confirmed that along with Palestine, Riot hopes to add "three more countries" in the near future.