Apex Legends Global Series: everything you need to know

by
Lloyd Coombes
Apex Legends are launching a competitive circuit for 2020, here are all of the details you need to know about watching, following and competing in the battle royale. Apex Legends certainly took many by surprise when it launched in early February of last year, with EA and Respawnâ€™s entry into the crowded battle royale proving to be a worthwhile addition to a subgenre that many would have argued was beginning to get stale. After winning Best Esports Game at the 2019 Game Awards, Apex Legends is set to start its first Global Series event, an official tournament set up by Respawn and EA, along with third-parties.

With the game still in its infancy in many ways, the Global Series is a great way for both amateurs and pros to jump into a competition - with $3 million in total prize money available across a multitude events. Just be sure to split it with your squad, no one likes a loot-hog!

Registration is currently open for the competitionâ€™s first stage, so hereâ€™s a quick overview of what to expect if youâ€™re dropping into the competitive landscape for the first time.

What is the Apex Legends Global Series?

Apex Legends Global Series is the first official esports tournament hosted by Respawn and EA, and will offer 12 global events in 2020 - split between the developer/publisher and Esports organisations like GLL and PGL, with 10 online tournaments taking place as well for a total of 22 events in the calendar year.

Players taking part will earn ALGS Points, with more points awarded for higher-placed finishes. The more points accrued, the more chance of making the later stages of the competition.

How do I enter?

Registration is open here, and you can find the full list of entry requirements here - but heâ€™s a brief run-down.

The Global Series is open to participants from 60 countries, and players must meet the minimum age of requirement to have an EA Account in their territory of residence.

The Apex Legends Global Series is also open to PC players only - meaning your computer will obviously need to be able to run it. If it does, donâ€™t forget that the game is a free download.

When can I start?

Things kick off this week with the first Online tournament. This image below, courtesy of Respawn and EA, sums up what to expect from the year ahead. This weekâ€™s first event is Online Tournament #1, and it takes place between January 25 and 27. Itâ€™s the first step on your Apex Legends journey, and is open to participants from the following regions:

Taking part in the online tournament will earn Global Series Points, with the best teams earning entry into the first Major Event (more on that shortly).

Those Global Series Points are used as a tie-breaker in situations that require them, and if two teams have the same number of points then progression is decided by the team with the most eliminations.

In fact, it pays to play aggressively - as the team with the most eliminations can earn a bonus number of points.

The next Online Tournament (#2) is scheduled for February 29 - March 2, so donâ€™t panic if you miss this one, although as the chart above shows, winners and high-ranking teams will have to go via a Premier Event to earn entry to the next Major.

For those that miss out on entry to the Majors via Online Tournament #1, youâ€™ll be able to take part in Premier Events.

These will take placed at unannounced venues on a date that is to-be-determined, but top-scoring teams have a chance at a $100k prize pool.

The top 8 teams will also qualify for the next Major, but if theyâ€™ve already secured their place then the qualification will drop down to the next team.

Itâ€™s worth noting as well that these events will be run in association with sponsors, and the sponsors will be able to set the rules for these tournaments. We canâ€™t imagine itâ€™ll be all that different to the standard â€œbe the last squad standingâ€ rules, but keep it in mind.

The event everyone is gunning for, the Major Events are exactly that - major. Each one offers a prize pool of $500k, with the first event scheduled to take place between March 13 and 25 in Arlington Texas at the Esports Stadium.

Worried about how to get there? Donâ€™t worry, EA will assist with getting you to the event - if you qualify, of course.

This first Major will only have teams from the first online tournament, but placing highly could get you into the second and third Majors - and then the Championship.

Not mentioned in the chart above are Challenger Events, which will take place in different regions. These offer rewards ranging from $25k to $75k, but perhaps more importantly offer a guaranteed spot in the Majors.

No challenger events have been announced yet, but keep an eye out for any in your region as the season progresses.

Of course, it all comes down to this - the best 60 Apex Legends squads duking it out for the title of Global Series Champion.

While thereâ€™s no location, venue, or date for the Championship Event just yet, we do know that there will be $1 million in the prize pool - a fitting return for being the best of the best. 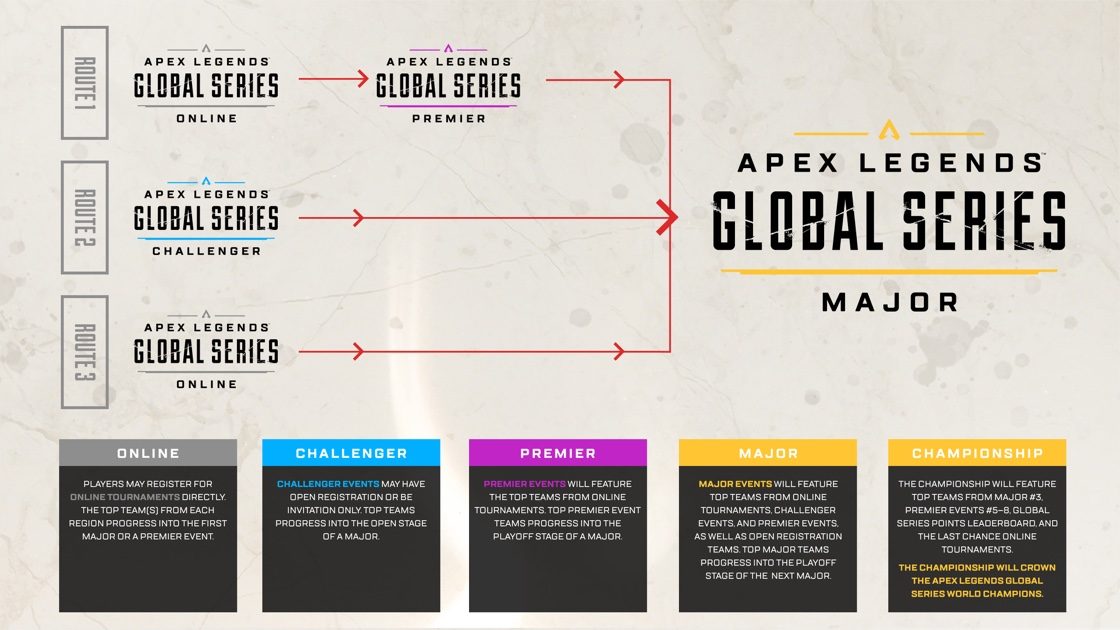 How can I watch Apex Legends esports tournaments?

All Major and Premier events will be live-streamed, as well as some of the Online Tournaments - but no information has been provided from EA on this yet. Weâ€™d imagine itâ€™s a safe bet that weâ€™ll see the contest shown on Twitch.

With Apex Legends being an ideal starting point for esports rookies, itâ€™s sure to be great to watch - and we wouldnâ€™t be surprised if a fresh Legend is revealed at some point during the competition, too.

For more on Apex Legends, be sure to check out our rundown of what weâ€™d like to see from the game in 2020 - where we noted the importance of the Global Series. You can find it here.