Alejandro Sandoval
Published: Apr 16th, 2021, 18:57
Zhongli will be back to Event Wishes after his initial release, while new kinds of weapons will also be added to the game’s arsenal. The promised day has arrived and today, miHoYo has revealed all the information regarding Genshin Impact Update 1.5 “Beneath the Light of Jadeite”, which will bring new mechanics into the game, as well as a lot of content such as characters, weapons, and more.

It’s time to learn more about the banners and weapons that will be available within this new update, bringing the comeback of one of the most powerful characters in the game, along with the debut of new weapons and characters.

After having debuted a long time ago within Genshin Impact, “Vago Mundo” Zhongli will be back to the game’s banners being featured in the update’s first Event Wish “Gentry of Hermitage”. 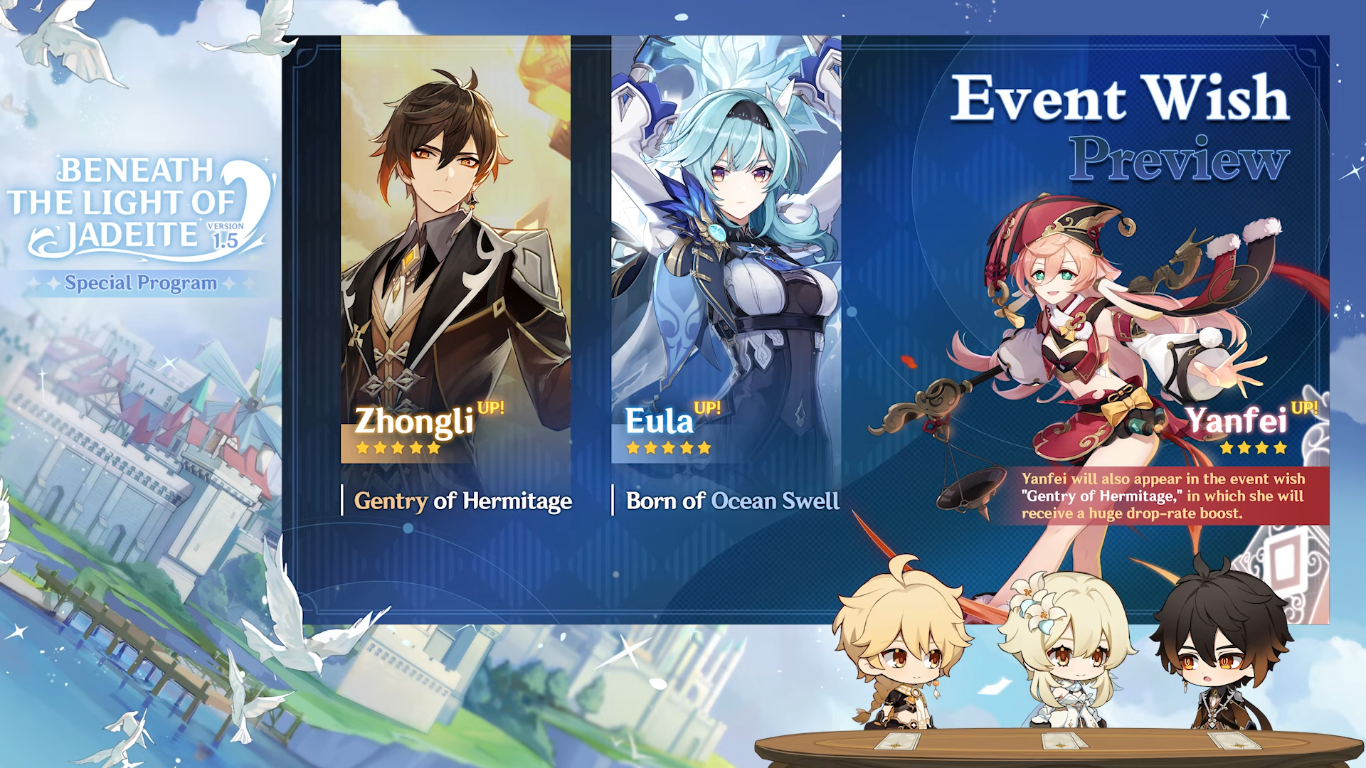 Along with him, one of the new four-star characters added in the update “Wise Innocence” Yanfei, will also make her debut in this Event Wish. Yanfei will be a Pyro vision wielder, who uses a Catalyst as her weapon, and is known for being a legal adviser active in Liyue Harbor.

Born of the Ocean Swell

The second banner available as part of this update is called “Born of the Ocean Swell”, and will bring with it the special debut of “Dance of the Shimmering Wave” Eula, a powerful character who is joining the five-star roster.

Eula is known for being the Captain of the Knights of Favonius Reconnaissance Team. She carries a Cryo vision and has a Claymore as her main weapon, while her attacks stand out for her fluid movements but with a strong strike.

The exact dates and duration for these banners will be announced at a later date. 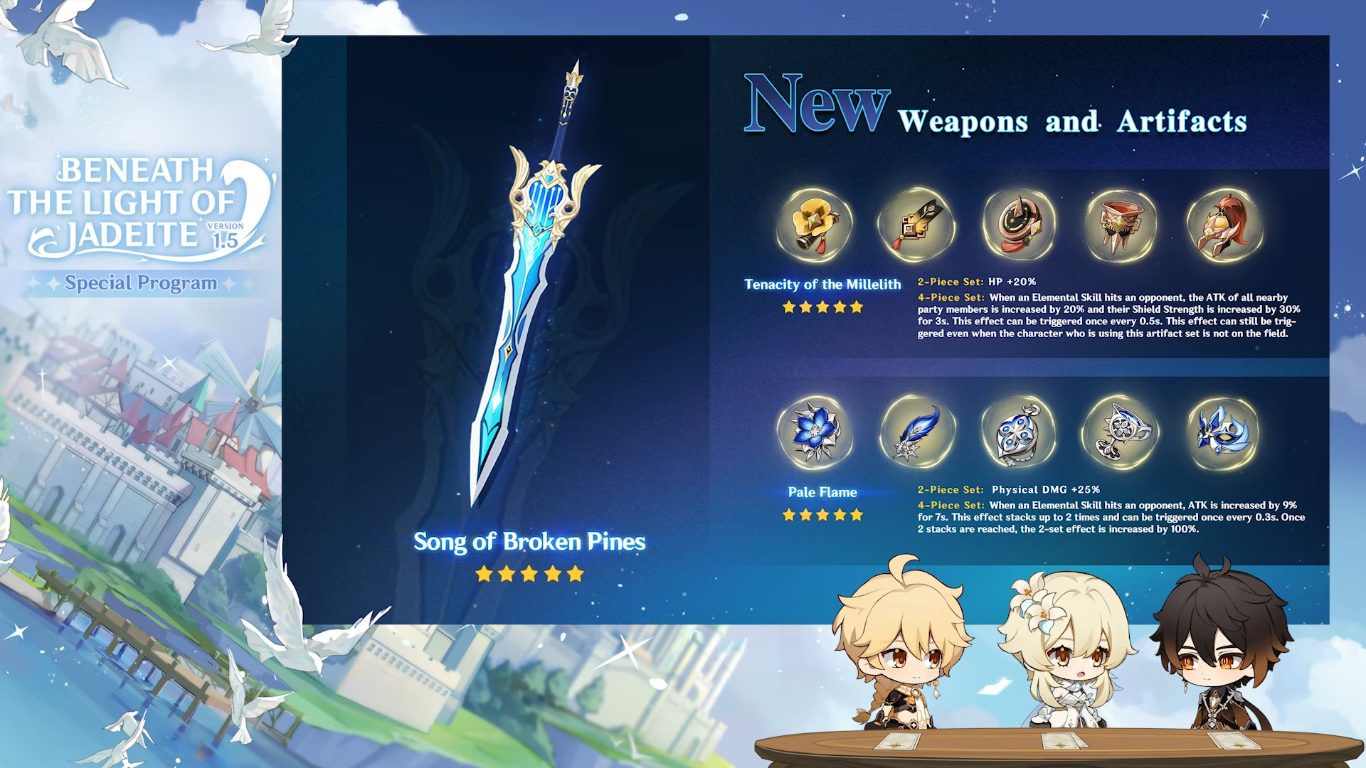 A Claymore known as Song of Broken Pines is the featured weapon to be introduced within the new update, which turns out to be the essential weapon of Eula, the new character we've just talked about.

This new weapon has a Physical DMG Bonus, as well as a passive that increases ATK by 16%, and when a Normal or Charged Attack hits opponents, the character will gain a Sigil of Whispers.

When having four of these, all of them will be consumed to obtain the “Millenial Movement: Banner-Hymn” effect for 12 seconds, which increases Normal ATK SPD by 12% and ATK by 20%.

Now, it's time to take a look at the new artefacts:

This set of artifacts will be focused on increasing both the damage of your party members, as well as giving you more resistance in battle by providing more HP and power in the shields.

Having two pieces from this set will grant an additional 20% HP. While having four pieces, it will allow that when you hit an Elemental Skill on an opponent, the ATK of your party will be increased by 20% and the power of the shields will increase by 30% for three seconds.

For this new set, everything will be focused on enhancing the offence by giving the damage percentage bonuses, as well as increasing the amount of ATK of any of its carriers.

Having two pieces from this set will increase Physical DMG by 25%, and when having four pieces your ATK will be increased by 9% for three seconds when you hit an Elemental Skill on an opponent.

This effect can stack up to twice, and if you do, the Physical DMG bonus awarded will increase from 25% to 100%. 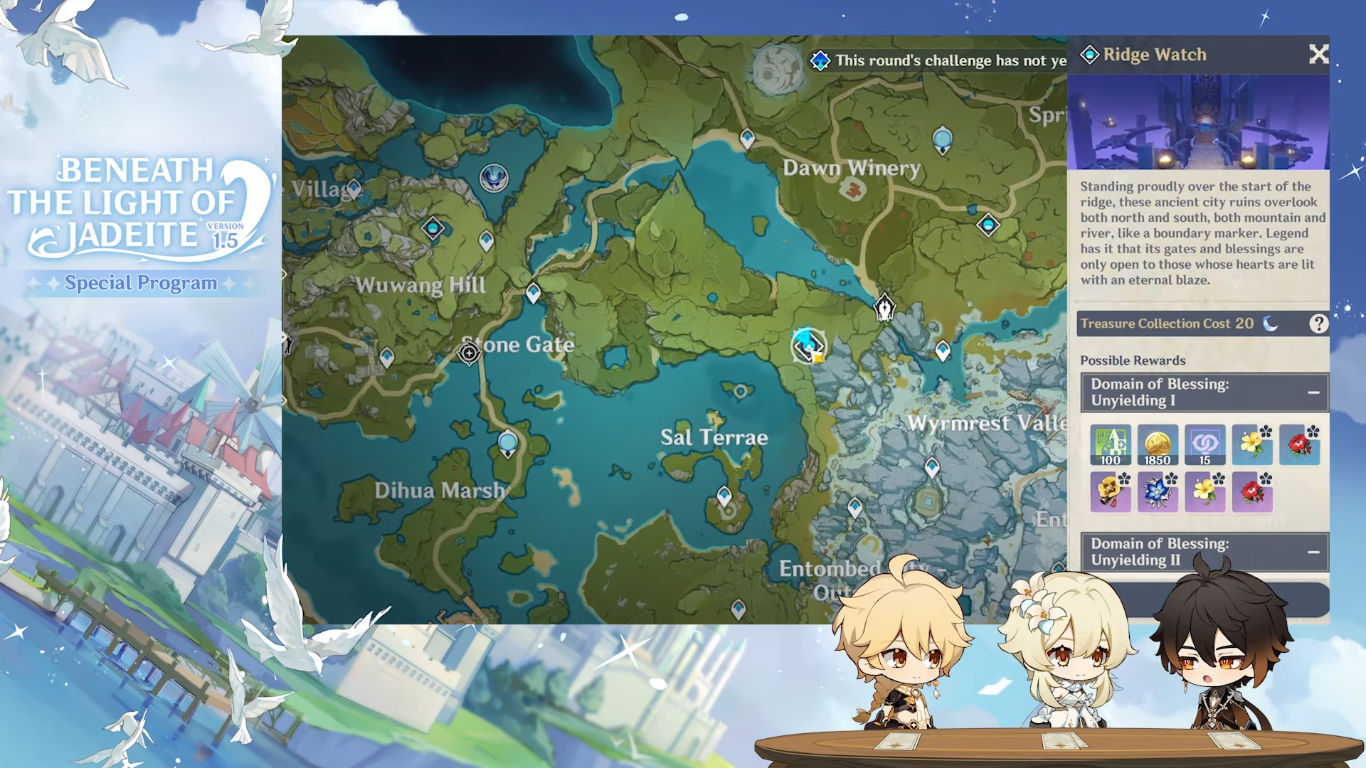 As in previous versions, these artifacts will only be available through a new domain located in the mountain pass that connects Mondstadt with Liyue, which will be known as Ridge Watch.

This will be a great relief to many players, as it is one of the most difficult areas to get to for anyone.

All of this announced content, plus more to discover, will be available with the arrival of Genshin Impact’s Update 1.5, on 23rd April. How To Change Traveler's Element In Genshin Impact Genshin Impact Ancient Stone Key: How to Get Genshin Impact - When will Baizhu be released?