by
Alejandro Sandoval
A battle between world champions, after a preseason full of expectations for their great signings, has managed to set a new record for the Korean league. Published on January 18th, 2021
The 2021 competitive season of League of Legends has got off to a strong start, with the beginning of the LPL in China, the LCS Lock-In from North America, and above all with great expectations, the LCK in Korea, the region of the current world champions DWG KIA, formerly Damwon Gaming.

The hype reached a fever pitch and in an unprecedented situation, the Korean fans have managed to break the historical viewership record in a regular-season match, with more than 800,000 viewers.

All of this happened thanks to one of the most anticipated matchups of the entire season: DWG KIA vs three-time world champions T1, led by Faker. 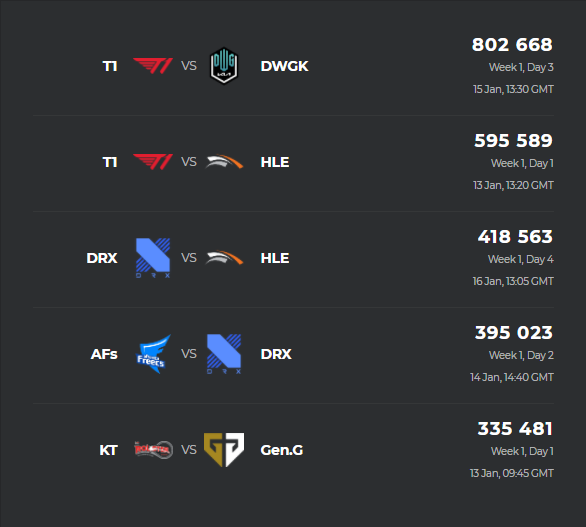 It must be added that transfers occurring during the offseason with T1 signing Yang "Daeny" Dae-in and Lee "Zefa" Jae-min, former main coaches of Damwon Gaming, and the ones that led them to win the Worlds 2020 finals last November, had a huge impact.

On the other hand, DWG KIA announced the arrival of the three-time world champion coach during the SKT era, Kim "kkOma" Jeong-gyun, along with veteran Lee "PoohManDu" Jeong-hyeon, winner of Worlds 2013 with SKT.

With pride and a momentary first place at stake, the two champion teams of the region faced each other in an unparalleled spectacle, where both teams gave their all to demonstrate their pre-season preparation during the KeSPA Cup, where T1 debuted at several of their players, while DWG ended up winning this, adding this title to their list.

It would be DWG KIA that ended up taking the victory with a 2-1 against T1, extending their winning streak within the LCK and finishing second behind Gen.G.

Thus, the world champions have managed to keep their crown without denting, but not before seeing part of what T1 has in store for the rest of the season, a season that has proven to be the most fierce at the moment.