by Gonzalo "mitchmozey" Cardona
Here is everything you need to know about the ProDrops game, the Rocket League collectable cards game, currently in its Alpha stage. In an industry that shapes and shifts in the blink of an eye, professional dominance and relevancy are temporary. It’s in the nature of the esports world -- easy come, easy go. Championships can immortalize a player forever, but we think they’ve found another way.

Collect, Trade, Fuse, Battle, Gain rare cards, and work your way up to having all the different cards and BEST COLLECTION! pic.twitter.com/SJX7VDEDcH

In its 9th month since entering the alpha stage (which you might hurry to be a part of, we all know how alpha rewards can get a little in demand), ProDrops has found success creating an active community with continuous feedback.

If you aren’t a user but don’t think you’ll get the hang of it, fear not as here’s everything you need to know about Rocket League Esports trading and card collecting game, ProDrops.

ProDrops is a desktop app hosted on Overwolf’s site. You can find the download link and description by following this link.

ProDrops’ concept is easy to grasp: you finish a game, you get rewarded a card. These cards can vary from professional Rocket League players, casters, content creators, etc. and each has different rarities distinguished by star ratings from one to six.

Once you register and start playing, you will receive five random cards of five random rarities to get you started.

Just like in Rocket League, each card has a rarity of its own and depending on it, you can trade in three of the same rarity to get one card of the next rarity. The rarity hierarchy goes as follows:

This, in turn, means that trading three Common cards will grant you one Uncommon, three Uncommon will give you one Rare, so on and so forth. 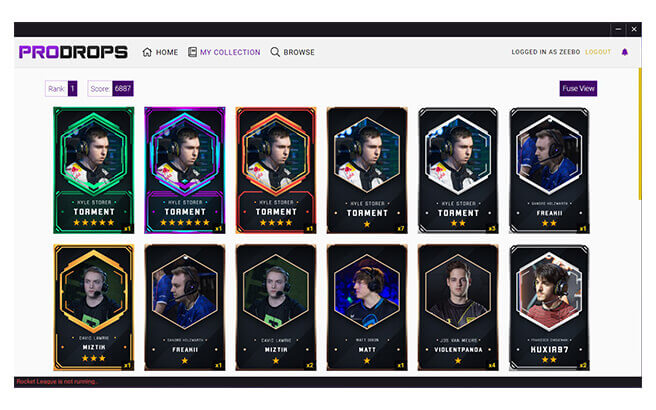 The process to get new cards at no cost is simple. Make sure you queue any type of Rocket League online match, finish the match and get a new card, with the exception of Custom Games and Tournaments.

Note: make sure your ProDrops client is displaying the “Rocket League is running” and to stick around after the match until the scoreboards screen shows so you don’t miss any cards!

You can always trade amongst players if you are looking for something more specific. You can do so by searching for their profile and clicking “Trade Offer”.

With many ideas still in the works as the game is still in its alpha stage, ProDrops plans to add a Battle feature maybe in a sports-fantasy league type of system.

We’ll keep you posted as updates start to roll out with the project taking a more full-time approach in the next couple of months according to their recent TwitLonger post.

Make sure that you join the ProDrops discord channel run by ProDrops’ own, Zeebo. In there you can find safe spaces for trading, FAQs and more as we are sure any feedback will be highly appreciated.