by Gonzalo "mitchmozey" Cardona
Here’s a list of the most obscure Rocket League decals ever, to keep an eye out in case you see them in the wild. With the Season 1 Rewards being untradeable decals, we wondered what would be the rarest set of skins to find in the wild. Of course, anything untradeable will be difficult to find, but what’s la creme de la creme in the soCcar video game?

Here are our top 10 rarest Rocket League decals, still in-game, and some you might be able to get your hands on yourself, eyes emoji. 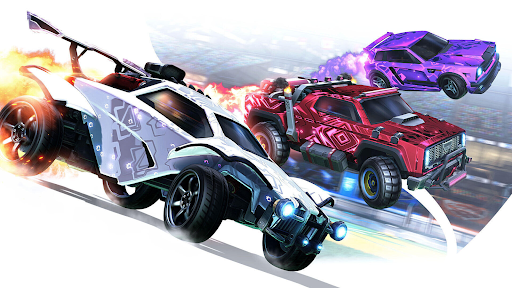 We will start easy, with this Season’s rewards. If you have been addicted in the slightest way to Rocket League, you should be getting one or two of these bad boys.

Introduced 9th December at the end of F2P Season 1, playing every so often in competitive playlists should do the trick to get at least the Bronze decal, but you can always check out our full guide to Season 1 rewards to get even more before it’s over.

With these rewards being untradeable amongst players, they really are a rare sight depending on the rank. With the first all-white decal reward for Supersonic Legends and the fact that they cannot be traded, if you run into any of these decals, know they have been earned through bloody and sweaty competitive matches.

Or maybe just a bronze player fooling around. 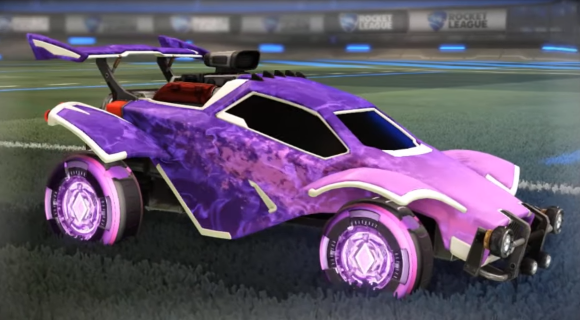 Our first Black Market decal of the day. If you don’t already know, Black Market is the highest of rarities from a list going from Uncommon, Rare, Very Rare, Import, Exotic to the end of the line, Black Market.

There are a total of 25 unpainted Black Market decals, and Dissolver is the most expensive of them all, going between 2200 to 2950 credits depending on your platform.

Of course, that is not taking into consideration Titanium White versions of some other decals. Dissolver cannot come painted in-game and is still able to compete with the Big Boy decals. 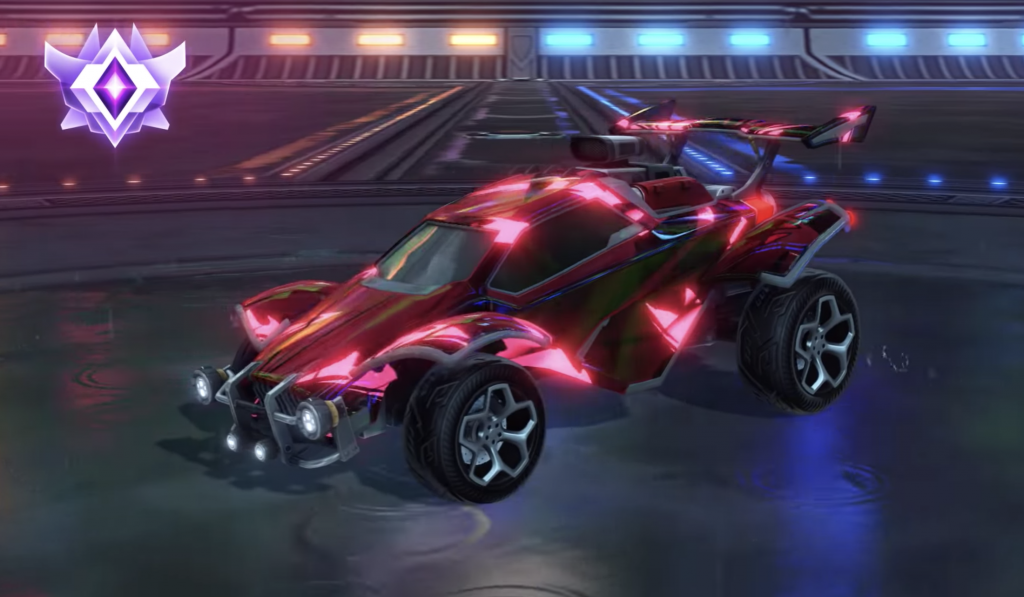 Going back to Season Rewards, these are the first and only other set of decals to be assigned the Season Reward status. With the exception of Supersonic Legend, every rank got their respective colour and decal at the end of the pre-f2p Season 12.

Again, untradeable amongst players, these are not only medals for their highest ranks achieved, but also a time machine for how long a player has been grinding the ranks. 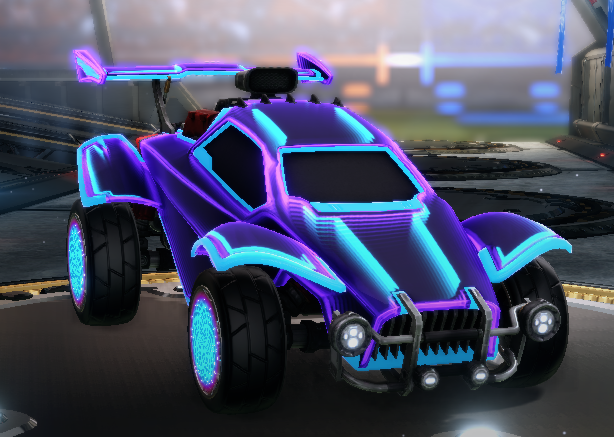 Oh, what I would give to have a Huntress decal for my Sky Blue Octane.

If you are part of the trading community, you know there are three things that are asked for the most regarding Fennecs: Ombre decals, Huntress decals and Fennecs themselves. You will usually see bundles of Fennecs and Huntress decals together and to no surprise.

The appeal of the Fennec is the Octane hitbox and the obtainable Huntress decal. That is because the Huntress is this futuristic, faux-3D style skin that is shared across five bodies in-game, but only tradeable amongst players for the Fennec battle car.

The Octane Huntress was part of the Rocket Pass 5 and is not tradeable amongst players, so if you see one, shed a tear for me, will you? 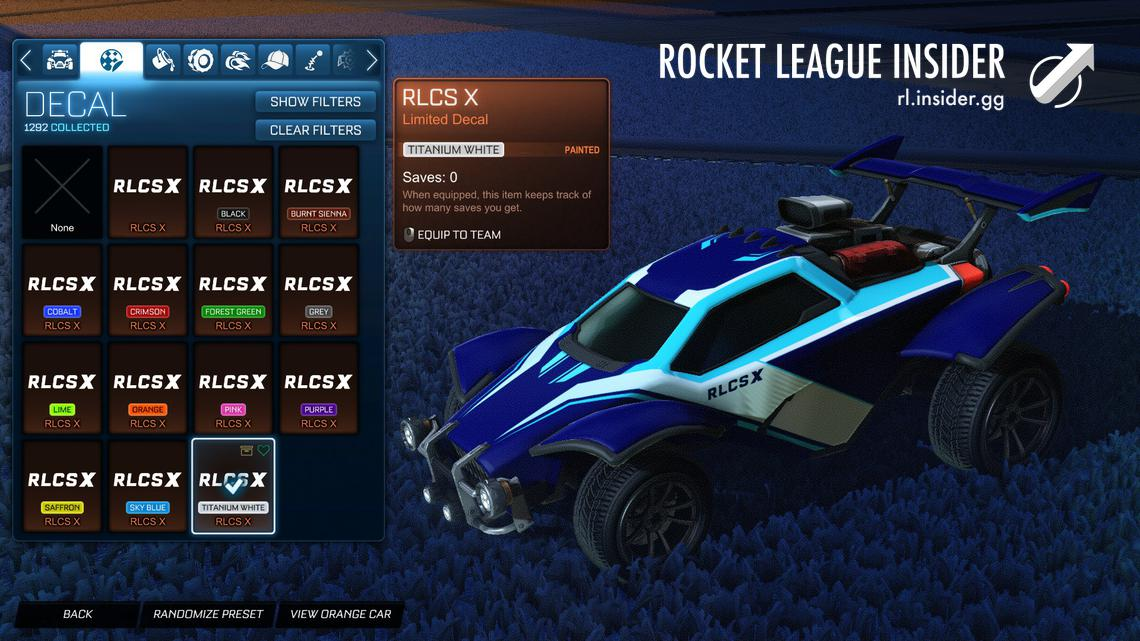 Octane decals are extremely in demand because the body is the most popular of the game. Literal poster boy. Therefore, when the revamped RLCS X kicked off with new Twitch drops, including unpainted and painted RLCS X decals for the Fennec, Dominus and Octane, we knew what was coming all along.

Titanium White being the most expensive colour in 99% of Rocket League items, this RLCS X decal for the Octane stands around 2900 to 5300 credits depending on your platform. 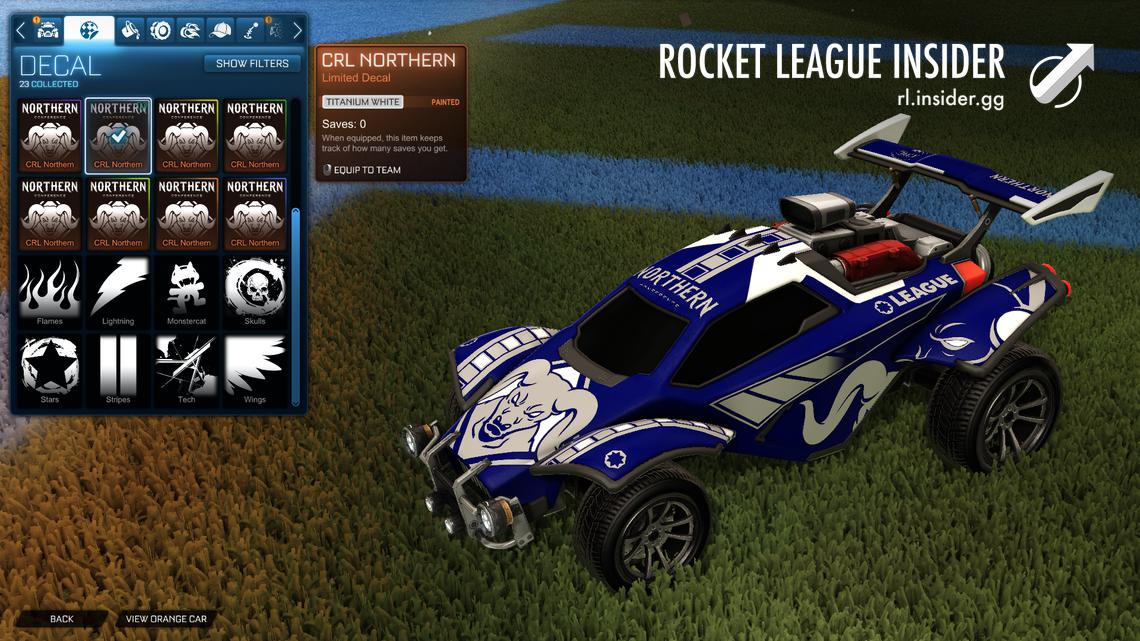 If you think the last decal was expensive, you don’t even know how bad it gets from here. Part of the RLCS Fan Rewards Season 2, Northern CRL in Titanium White costs from 7200 to 9400 credits depending on your platform.

The scarcity and demand of the RLCS rewards are what makes them such rarities. When usual drops can be varied from a pool of 15+ items, getting the best one and painted Titanium White, is literally lighting striking twice. 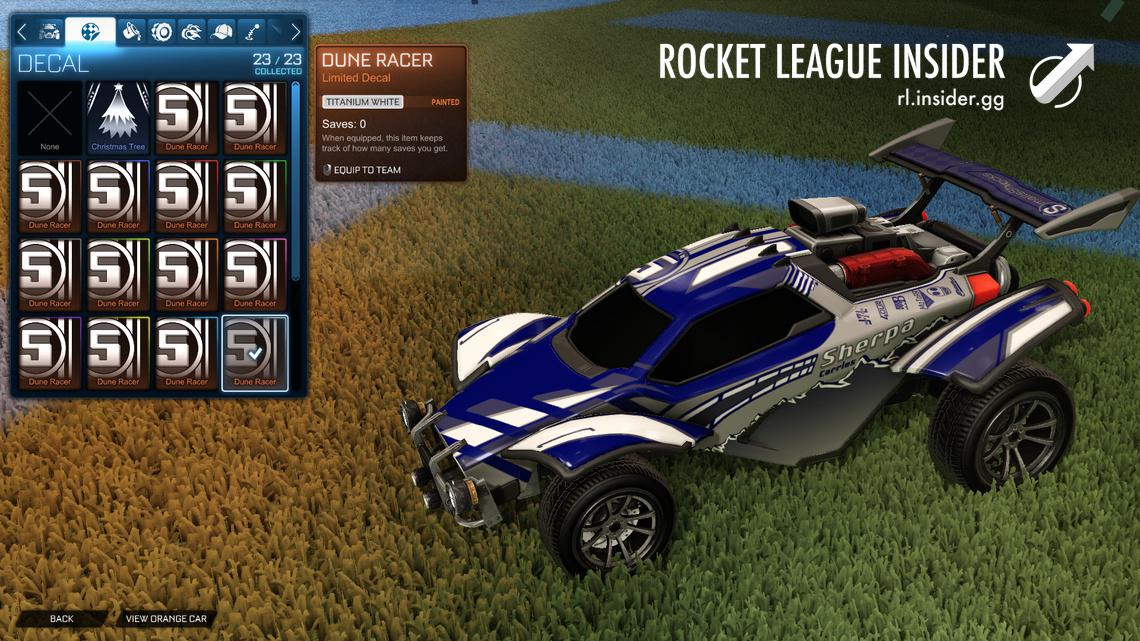 Keeping up with the trend of white decals for nutty amounts, we have Titanium White Dune Racer. If I were to run into one of these in the wild, I’d tip my hat in respect as it is a sign of status.

Supply and demand doing its magic once again for what could’ve been just another day at the office at the decal designing department. 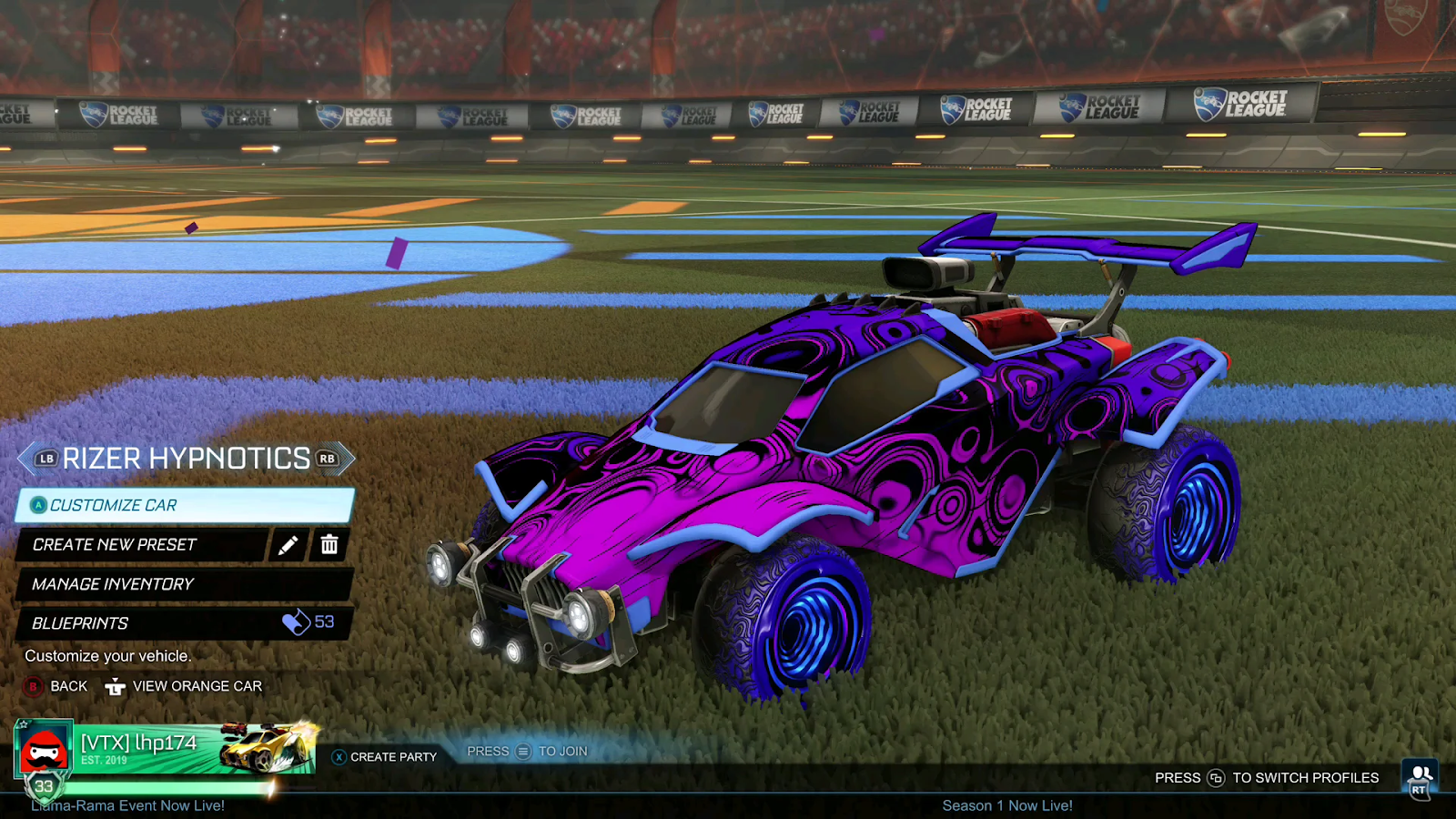 Taking a break from the trading economy and community, we are jumping ships back to the untradeable amongst players category with Black Market decal Rizer.

These decals are one of the few BM additions this f2p Season 1 brought us, along with Stipple Gait and Buffy-Sugo. The only difference is, Rizer can only be obtained through crates or cups purchased with Tournament credits. How do you get Tournament credits, you ask? Grinding hard.

With players earning around 12,000 credits tops by winning an hour-long Tournament, with four to five tournaments a day, four crates available to players, costing 1200, 4000, 12,000 and 20,000 Tournament credits each, and the highest guaranteed rarity drop being Very Rare, the odds of getting a Rizer or a Painted Rizer (or a Black Market for that matter) are very, very slim. 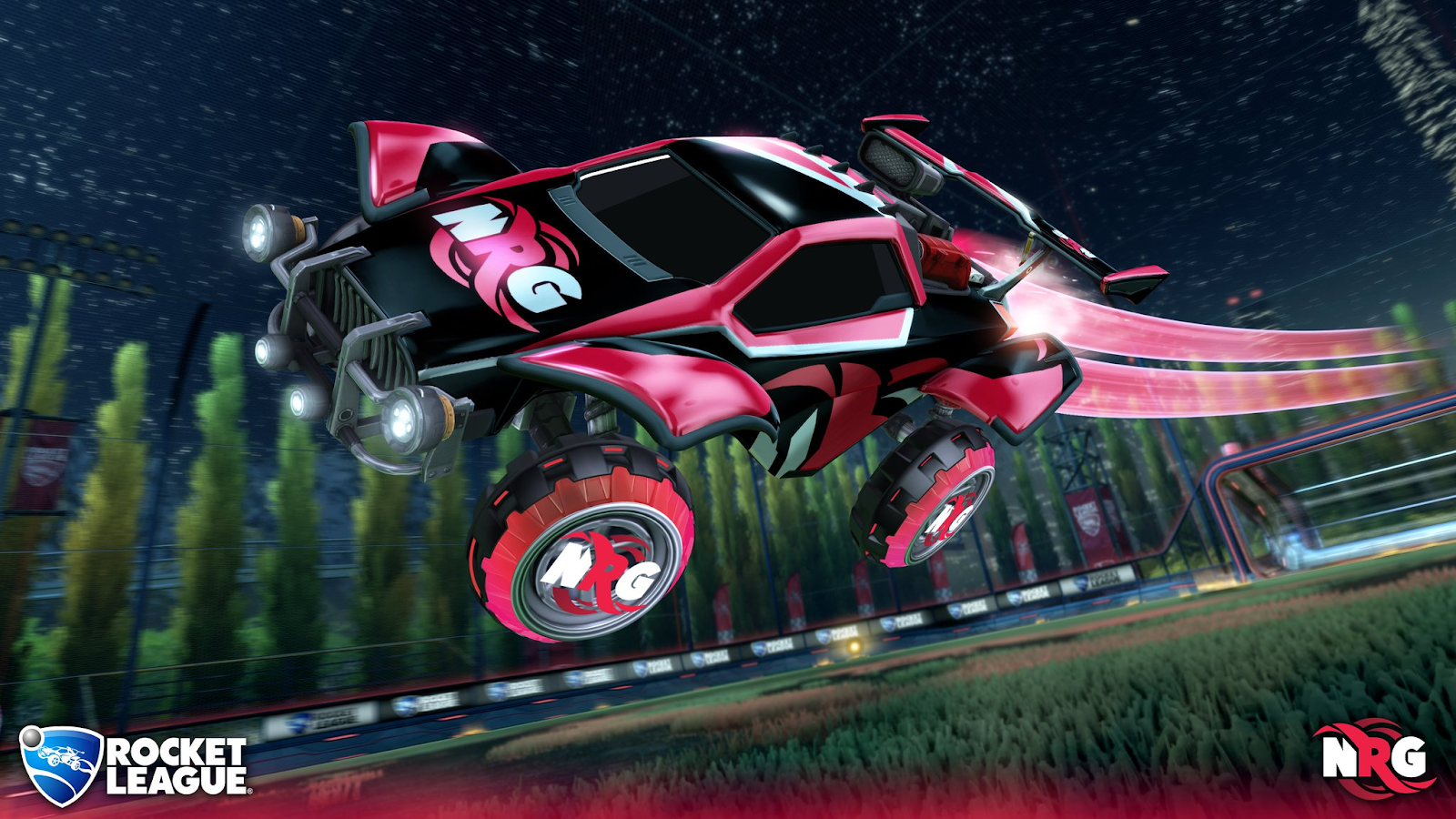 One more untradeable amongst players decals for good measure, the NRG Legacy decal comes in second place. Previously featured on the Esports Item Shop, getting one for yourself wasn’t a hard task, until a certain marketing department got in the way.

With NRG’s rebranding from last summer, we were left with nothing but broken dreams for the original decal.

Now, only obtainable by buying the username and password of a seller for actual money (yuck) this decal is not projected to be brought back to the in-game store any time soon, if ever.

And if an advertising minor has taught me anything, that’s a horrible decision. The king of kings in rarest decals ever, and for good reason. Discontinued for looking too similar to its Titanium White counterpart, Grey Main Frame decals are literally limited in quantity. They no longer drop in trade-ups or blueprints. The ones that exist are the only ones left.

The only Black Market Limited decal. Yikes. That sets its price at, not joking, 43,000 to 53,000 credits. That is around $500 dollars, that if the seller doesn’t get picky and decides to double down on the price because of its scarcity (and I don’t blame them).

So there you have it, the rarest Rocket League decals in-game and available to you if you are willing to put down the money for them. Even if they are untradeable amongst players, you’d be surprised the lengths the community has gone to to make a buck out of digital paint jobs.