by NikolaSavic
The Wrath of the Druids expansion for Assassin’s Creed Valhalla is finally here. Check out the Ireland map and all points of interest you can find. Published on May 13th, 2021
Wrath of the Druids is the first big expansion for Assassin’s Creed Valhalla and it brings Eivor to Ireland, where a brand new adventure awaits you.

Although just a DLC, Wrath of the Druids is a proper old school expansion, with a full new story, new weapons, armours, and other items, new enemies, and several new regions. Once purchased, Wrath of the Druids will unlock you a completely new region in the game. We are, of course, talking about the island of Ireland, where you will go to meet new foes and allies and to establish new trade routes, and fight against the Children of Danu.

The map of Ireland is huge and it opens up 4 new regions for players to explore: Dublin, Meath, Connacht, and Ulster.

Here you will go on missions to unlock trade posts, unravel mysteries, find members of the cult, discover secret locations, visit various towns, and much more.

Although just a first expansion, Wrath of the Druids adds a lot of new content to the game, and you will quickly find out that there's a lot of things going on.

First thing you will find out that there as several new icons present on the map, which weren't used before, as these locations and activities are unique to the expansion.

Here you will find all the important points of interest on the map of Ireland and other things you should visit.

Wrath of the Druids Dublin POIs 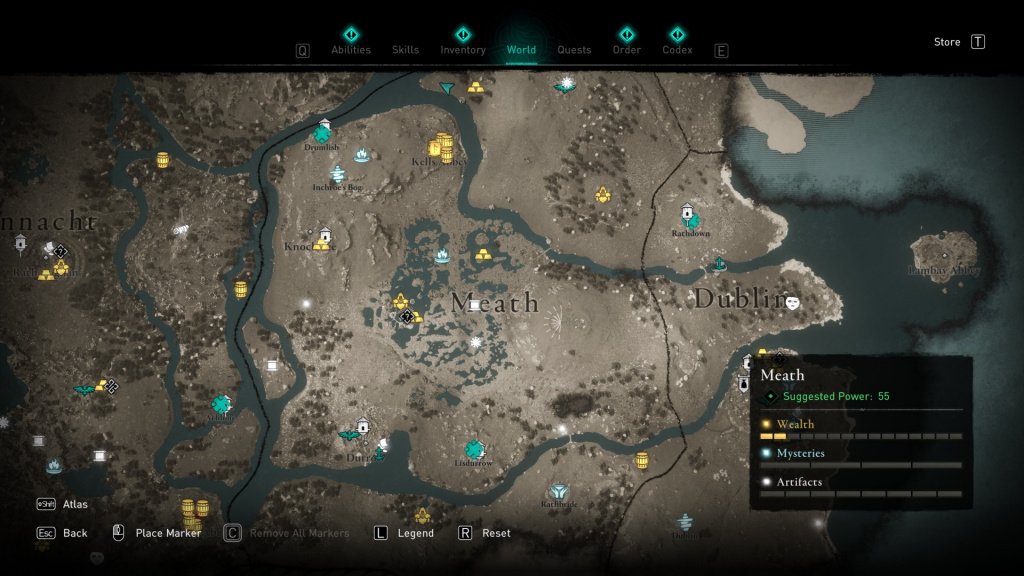 Dublin is the smallest region on the map of Ireland. It consists of a narrow coastal area and Lambay Abbey island. There are very few locations to visit, like Rathdown, Skald's Rest and some other secrets.

Wrath of the Druids Meath POIs Meath is an area east of Dublin. It is the second smallest region, but there are much more things going on there, including several towns, and the bog area where one member of the Children of Danu. is hiding.

Wrath of the Druids Connacht POIs Connacht is one of the largest regions of Ireland in Wrath of the Druids.

There are a lot of locations to explore here, so make sure to check out all the locations on the map which you will see below.

Wrath of the Druids Ulster POIs Finally, Ulster is an equally large (if not larger) region as Connacht, and when it comes to locations to explore and content to experience, it is by far the densest region.

You will spend a lot of time exploring its secrets. Check out the images below to know all points of interest of Ulster.

And there you have it, these are all Assassin’s Creed Valhalla: Wrath of the Druids Ireland map points of interest!

Assassin's Creed Valhalla: How to get the Pharaoh's Horse