by
Phoebe Dua
The life of an entry fragger isn't easy, even if a storied player like apEX makes it look natural. After years at the top as part of elite French rosters, he has established himself as a true king of a role not just any player can do. Dan "apEX" Madesclaire is one of the last of a dying breed in the scene. One of the few “true” entry fraggers left and one with an unmatched pedigree in the role.

While French CS is often seen as something of a jungle (or a circus, depending on who you ask), apEX is a lion. Like Mufasa, apEX rushes into the fray in order to protect the Lion Prince from any initial harm.

He certainly knows how to 'roar' and his presence exudes natural confidence with an untamed edge.

As times are changing, the individual skill of an entry needs to be high even with the inevitable inconsistent numbers the role experiences from map-to-map.

Like the majority of France’s biggest names, apEX started out playing CS: Source as a teenager.

The “French Breakout Player of 2010” nearly went the way of Hovik "KQLY" Tovmassian, having been hit by an ESL cheating ban after a lucky jumpshot in a match.

It wasn’t long after this that Richard "shox" Papillon and Edouard "SmithZz" Dubourdeaux left VeryGames, not only the best team in France but one of the strongest CS teams in the world at the time.

Michael "mK" Zaidi, kennyS and apEX were the three players tried out by VeryGames but only apEX was full-time, with kennyS and MK sharing the time due to school and other commitments. In the end, apEX was signed as a member of the team in early 2012 but was replaced by a returning SmithZz before the switch from Source to Global Offensive.

Starting his time in GO on Anexis eSports, apEX would then see switches to Epsilon eSports, PRIME CLAN and Team eXtensive! squads before finding himself on Team LDLC for the first time. This LDLC team went on to beat a long-time rival in the form of Ninjas in Pyjamas at Fnatic FragOut League Season 2.

It was in mid-2013 that Alexey "OverDrive" Birukov joined apEX and kennyS with the legendary Polish duo of Filip "NEO" Kubski and Wiktor "TaZ" Wojtas. Taking down CIS giants Natus Vincere, the team did so despite apEX needing to translate English calls for the less confident and Anglo-savvy kennyS.

A return to LDLC reunited apEX and Happy, but 2014 would bring the first of what would later be called the “French shuffles” that plagued the region. apEX himself would go on to move in every single shuffle, the only player to do so.

With various players looking to establish new teams following respective poor results, it would be apEX, KQLY and Mathieu "Maniac" Quiquerez that left LDLC for Titan, the leadership of Kevin "Ex6TenZ" Droolans and kennyS reunited with apEX once more.

Titan looked promising, but disqualification from DreamHack Winter 2014 following a VAC wave that hit KQLY and Sf saw a possible Major for apEX fall into different French hands. It was Team LDLC, led by Happy, that would lift the trophy as France’s last team standing.

The second French shuffle came not even a year following the first one. It was a far more dramatic affair, with infighting at Team EnVyUs leading to the removal of France’s most well-known duo and apEX and kennyS swapping with them.

DreamHack Cluj-Napoca was the final Major of 2015. The reign of Fnatic in decline left the throne open for the taking. For the last three years, France and Sweden were jostling for the top spots and the Swedes came out on top on most occasions and had far more to show for their struggles across NiP and Fnatic.

Before the Major, EnVyUs had a week of bootcamp that had to be stopped. The odds did not look to be in their favour and yet France gained their second Major in Romania, apEX and kennyS sharing the glory their three teammates had shared already in the previous year.

Fans also got the closest example of a fabled French superteam (before the final form would emerge two years later) thanks to The World Championships 2015, with apEX, kennyS, NBK, shox and SmithZz united to conquer the world.

This French glory and pride did not last.

2016 was a forgettable year outside of the addition of Timothée "DEVIL" Démolon that led to the kioShiMa being dubbed “the problem” thanks to an interview given by kennyS after the move.

There was only one thing left to do by the time 2017 arrived.

The third French Shuffle saw one of the most important moves in the history of French CS. For the first time, kennyS and shox would be together on the same roster at the same time.

Not only that, but the kingmaker NBK also joined from EnVyUs.

Alexandre "bodyy" Pianaro was the final piece of the G2 superteam puzzle. The former Team LDLC White player had in fact attended the same university as apEX before joining G2.

The strain of numerous personalities eventually pulled the superteam apart, resulting in a “mini-Shuffle” in early 2018. Rather than the usual player removals or swaps, the situation on G2 was layered.

After struggling to establish himself as an in-game leader, shox wanted to bring back Ex6TenZ and SmithZz who were previously on G2 while benching NBK and apEX.

NBK naturally disagreed with this plan and instead proposed his own idea. While shox had and recovered from wrist surgery, NBK was allowed control over the roster. It took only two months to implode following a poor showing at DreamHack Masters Marseille 2018 with Óscar "mixwell" Cañellas.

Shox retaking the reigns saw apEX out of G2 alongside NBK, despite the latter’s attempts to remain and internal objections to shox’s project.

It was not kennyS that disagreed, but bodyy who was hesitant to agree with the return of the two veterans.

With rumoured buyouts of $800,000, neither player were scooped up by other organisations. There was apparently potential for a move to mousesports’ European roster for apEX that was shut down due to the buyout figure.

It wouldn’t be until October in 2018 that apEX would return to the server once again. With the completion of his baccalauréat, Mathieu "ZywOo" Herbaut was now free to explore possible teams. A mutiny on EnVyUs had seen Happy and Cédric "RpK" Guipouy standing in for Tempo Storm while the FACEIT Major passed them by.

Team Vitality had been a growing influence in French esports at the time, fielding an impressive Rocket League roster and holding an LEC spot. Before OG and Evil Geniuses made entering into CS:GO cool again, Vitality did it first.

The initial lineup was legacy-heavy, with ZywOo being the biggest talent among the five, which soon saw Happy replaced by Alex "ALEX" McMeekin.

Following the announcement of our roster changes, we're glad to welcome @Vitality_ALEX as a new member of our CSGO squad, please give him a warm welcome 🐝 #VforVictorypic.twitter.com/4Fao9F4zx3

Like many in the French scene, ALEX had spent time on LDLC. During those two years, he played under Ex6TenZ with teammates such as Maniac, DEVIL and François "AMANEK" Delaunay.

ALEX stepped up as an IGL for LDLC following the surprise benching of Ex6TenZ and his call-up to Vitality was to undertake a role even seasoned players struggle with - control a French roster without getting yourself kicked or scapegoated.

While apEX is one of France’s biggest personalities and displays a clear knowledge of the game, he is one of the few experienced players to never attempt to take a full leadership role. During his time on various teams, he has led specific sides on specific maps, but never held the title.

The life of an entryfragger is one of inconsistency, the nature of the role making it difficult to have a consistent rating overall for any tournament or set period of time.

While the duo of shox and SmithZz is the best-known in the French scene, apEX and kennyS have had an entwined history of their own that is often left out of each of their respective stories.

On one hand, shox and SmithZz both made sacrifices to play with each and and continue to do so, making their bond seem almost unbreakable. On the other hand, apEX and kennyS had their difficulties and falling-outs but often found their way back to each other when the time was right.

Even now on competing rosters, the friendship is still present.

Defeat for G2 Esports at the hands of future teammates on CR4ZY at the StarSeries Berlin Major 2019 saw a touching moment between apEX and kennyS captured by Igor Bezborodov shared widely within the community. 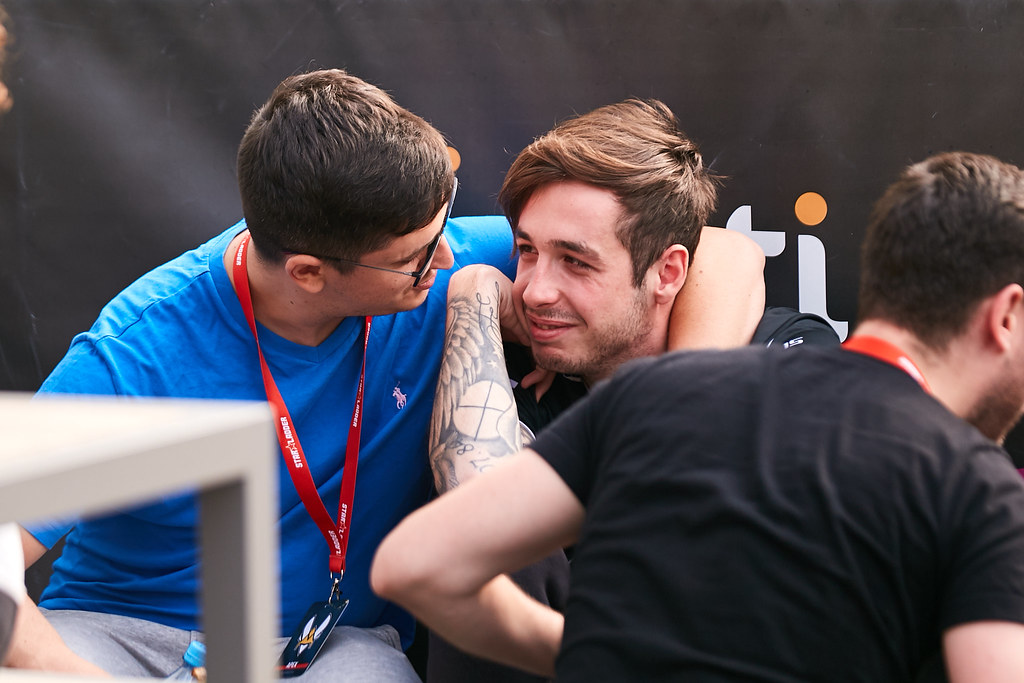 With G2 rebuilding with international players and looking stronger for it and ZywOo not going anywhere on Vitality, it seems unlikely that the duo will play together again soon.

That is the nature of Counter-Strike. While it seems harsh and brutal, it is about survival and success. A player like apEX has secured his legacy and for now remains at the top of the competitive food chain in Vitality.