Who is Sett? The first new champion coming to LoL in 2020

by
Phoebe Dua
Sett is to be the next champion added to League of Legends following on from Aphelios at the end of 2019. The brawling Ionian juggernaut has a fitting backstory and a set of physical damage abilities more than fit for a fighter. Published on January 5th, 2020
First hinted at in the last Champion Roadmap as "an Ionian juggernaut that thrives at the centre of a brawl" as one of four upcoming champions, Sett has been confirmed as League of Legends' next champion to be released. The backstory of Sett, the Boss, is explained briefly on his champion page:
"A leader of Ioniaâ€™s growing criminal underworld, Sett rose to prominence in the wake of the war with Noxus. Though he began as a humble challenger in the fighting pits of Navori, he quickly gained notoriety for his savage strength, and his ability to take seemingly endless amounts of punishment. After fighting his way through the ranks of local combatants, Sett muscled to the top, seizing control of the pits he once fought in."

While the identities of his parents are unknown, his lore states that his mother was an Ionian vastaya and his father a Noxian human.

The vastaya are a chimeric race of Runeterra and are already present in the game through Ahri, Nami, Neeko, Rakan, Rengar, Xayah and Wukong. They can be identified by their mixed animal and human characteristics. Sett's family was expelled by the vastayan community for violating its tribal norms while his father's status as a pitfighter initially protected the family from any vocal disapproval by humans before his departure for more profitable foreign pits. Riot has confirmed that despite their similarities and his status as a pitfighter, Draven is not Sett's father.

In his anger, Sett's primal strength and ferocity allowed him to defeat opponents and become 'King of the Pit' while providing for his mother, before seizing control of the fighting arena for himself and turning it into an underground criminal empire.

Innate - Heavy Hands: Sett's basic attacks alternate between a left punch then a right punch. Sett begins attacking with a left punch, and will reset back to it after 2 seconds of not performing a right punch.

Sett's next two basic attacks within 5 seconds each deal bonus physical damage. Consuming an attack will refresh the timer.

Passive: Sett stores 100% of the damage taken post-mitigation as Grit on his secondary resource bar, up to 50% of his maximum health. Each instance of accumulated Grit decays by 30% every second after 4 seconds.

Down but not out: Sett also gains a rapidly decaying Hybrid resistances icon shield for 3 seconds equal to the Grit expended.

Active: Sett pulls in enemies at his front and back, dealing physical damage and Slow icon slowing them by 50% for 0.5 seconds.

If Facebreaker affects at least one enemy on each side, all enemies are Stun icon stunned for 1 second upon landing.

Active: Sett  suppresses the target enemy champion and then dashes unstoppably at a fixed distance toward it, carrying it along for 1.5 seconds before slamming it into the ground.

Enemies within the impact area take physical damage, reduced by up to 40% on the edges, and are slowed by 99% for 1.5 seconds.

The dash will prematurely end upon reaching a wall that cannot be dashed through.

Just like Senna and Aphelios in their recent releases, Sett will be getting a skin at launch from an all-new collection. 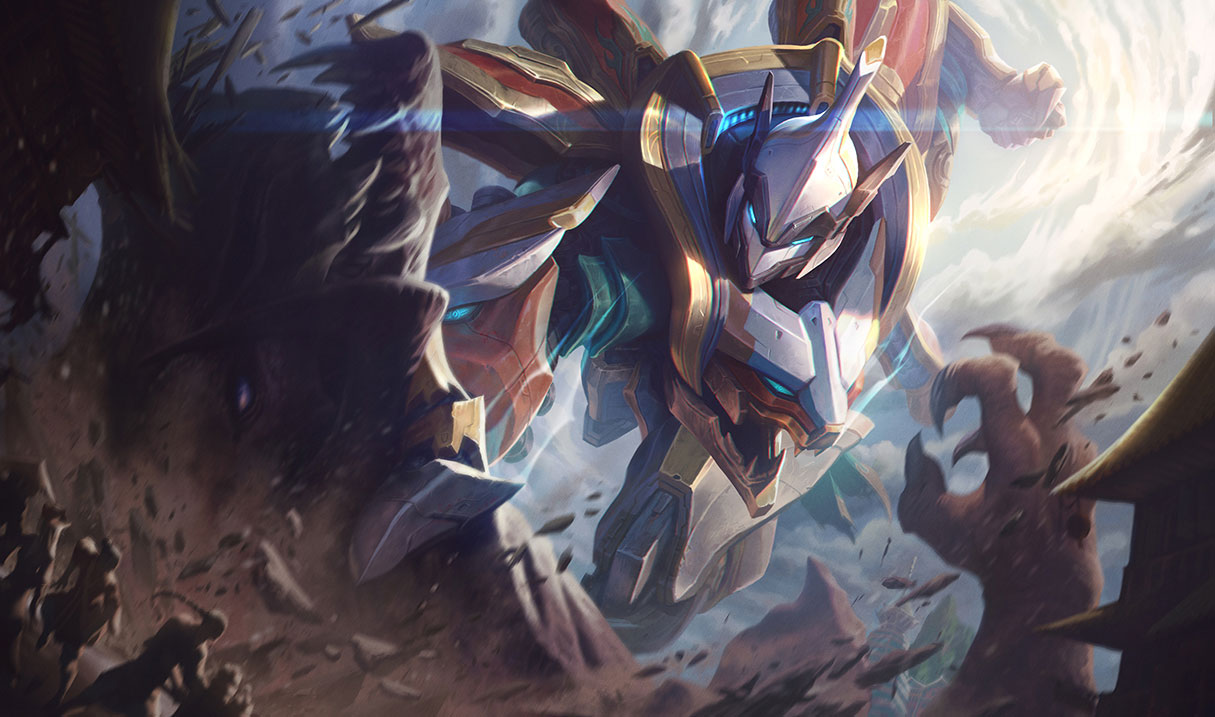 Mecha Kingdoms Sett is expected to drop in the same patch as the champion himself, with multiple gemstone-themed chromas available.

Skins for Draven, Garen, Jax and Leona will also feature in Mecha Kingdoms with Garen receiving the first Prestige Edition of 2020.

After entering the PBE back in December, Sett should be released into the main game following the 10.1 patch update that will hit servers on 8th January.