by Sam "Initia1ise" Hapgood
Riot have unveiled the latest champion to hit the rift, and it’s none other than the infamous Sovereign of the Shadow Isles himself, the Ruined King. Now dubbed Viego, the man once known more as an item than a person will be gracing all manner of Riot projects this year. This is a first look at how he’ll work on Summoner’s Rift: Published on January 9th, 2021
It’s been teased for months, but he’s finally (almost) here! The Ruined King - now officially named Viego - is Riot’s latest major narrative fulcrum. He’s starring in his own game via the Riot Forge, is an all-new champion, and is even the major antagonist of the start-of-season cinematic:

A king returns. All he touches turns to ruin. pic.twitter.com/KOh7hyXsxP

League of Legends with an actual narrative arc? A shock indeed. While we may be being a touch facetious (Sylas’ invasion of Demacia from last season springs to mind), Viego is certainly being pushed by Riot as a major new development within the universe of League of Legends and beyond.

While the Ruined King is making big narrative and Stylistic waves, let’s dive into whether he can bring ruination onto the rift as well:

The ability to body-hop and steal the best items and abilities the enemy has available is both damn cool and potentially extremely powerful. Managed to kill the six-item Vayne? Now that’s your six-item Vayne. Think Sylas’ R crossed with Kayn’s R.

Judicious use of who you target down as a player and team will be vital to getting the most out of this ability. Take on the guise of that Vayne and you’re set to obliterate a teamfight, but suddenly end up as a one-item Janna and your power drops through the floor. Pair this up with a reset on Heartbreaker, Viego’s ultimate, and the montage reels of executing and body-hopping your way through the enemy team make themselves.

Q - Blade of the Ruined King

More than an item indeed. Blade of the Ruined King (the ability, not the item) has a fairly familiar passive - namely, basic attacks deal percent current health bonus damage on-hit. Additionally, attacking an enemy Viego recently hit with an ability means that attack hits twice, with the second hit siphoning health rather than dealing straight damage. That second strike can still critically hit and deal on-hit effects, though. 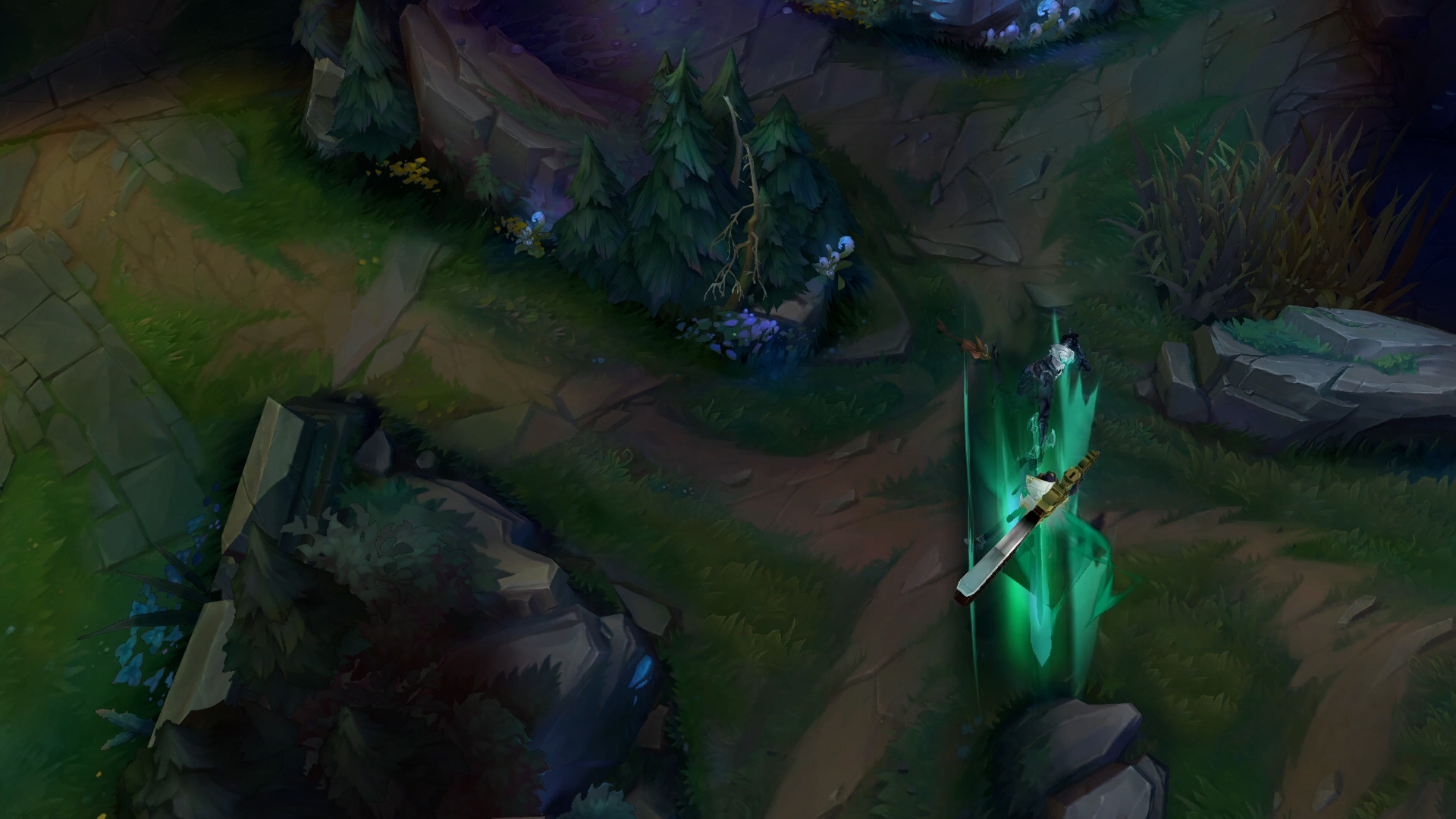 This is Viego’s bread and butter damaging ability, and likely your first max (depending on scalings). Moreover, it sets up Viego well for a spellweaving playstyle - hit an enemy with an ability, then hit them with the double auto, then another ability… ad infinitum until the job is done. The ability also comes with a lot of in-built sustain, and likely works pretty well with either crit items or a more on-hit focus of Goredrinker plus (surprise surprise) Blade of the Ruined King.

An untargeted dash that doubles up as a ranged stun. The range and duration of the stun duration scale with how long you charge the ability, but the damage and dash distance are a flat amount. This sets it up for two things: a rapid escape or mobility tool on press, or a considered, single-target engage and ganking tool with a full charge.

There are a number of unanswered questions about the functionality of Spectral Maw that we just don’t have answers to yet. First among them is does it allow you to dash over walls? Second, can you combine it with Flash to extend or redirect the ability? If the answer to either is yes, then Viego’s viability and power as a jungler and/or roaming solo-laner sky rocket.

If Qiyana’s R created Senna’s E around terrain instead of dealing damage, you’d end up with Harrowed Path. Viego’s E spreads Black Mist around a nearby wall, and while he remains within it he becomes camouflaged and gains Attack Speed and Movement Speed. Even better, he appears to remain camouflaged even when he’s attacking.

This ability alone will make picking your arena to fight as - or against - the Ruined King will be crucial. Fighting him in the tight, heavily walled areas of the jungle and you’re in his preferred terrain, but do so in the middle of a lane or the river offers him far less terrain with which to use Harrowed Path.

Pick your battles accordingly - remember he gets a lot of nasty on-hit effects from his Q, which pairs up oh-so nicely with the attack speed amp from Harrowed Path…

Reset city, thy name is Heartbreaker. Viego’s ult has him discard any bodies he is currently possessing and teleport forward, attacking the enemy champion with the lowest percent health in range and knocking all other enemies away. Heartbreaker deals bonus damage based on their missing health.

A blink, an execute, and resets on using his passive, Sovereign’s Domination, Heartbreaker is certainly potent if used correctly. Couple it up with another burst, and you can quickly isolate, eliminate, and then imitate a high-value enemy target. Even better, with the cooldown reset from his passive you can have Heartbreaker up and available multiple times in a teamfight, allowing you to bounce around teamfights between vulnerable targets for those big multi-kills.

As another note, by the looks of the limited gameplay footage available, it can even be used to blink when enemies aren’t in range, making it a potential escape tool. Keep that in mind.

The other side of the coin, of course, is using Heartbreaker wrong. The biggest fly in the ointment is that you can’t freely target which champion gets hit by Heartbreaker, it targets the lowest percent HP enemy in range. That makes it challenging to open up with this ability, or get to high-value targets should they manage to keep the health totals high. Bear that in mind if you find yourself unable to navigate messy teamfights well! It’s still a little early to know exactly how Viego is going to be played. We still don’t have any numbers, scalings or all the details about how his abilities interact - particularly his W, Spectral Maw. That said, we have some idea about how the Ruined King is going to work on the rift.

First things first, he’s likely going to work well in the jungle. His E is by far most effective in the jungle, and his W could well be an excellent ganking tool. Add on his high sustain from his Q’s passive, and he should fit right in to the jungling profession. The only question then is how well does he duel early and how quickly and healthily does he clear? To put it another way, how are you going to feel playing Viego when you run across Graves at your Raptor camp? If you can stand toe to toe, or at least extricate yourself from the situation, then Viego is good to go.

He may well make for a good solo laner as well, particularly up in top lane. Sustain and Current HP damage are great tools into melee matchups, but it remains to be seen whether he can brawl with Jax, Sett, Renekton and the like. If he can at least hold on and scale, then there may be space for him in top, even if it is more awkward to use his E. As for play patterns, you’ll likely want to open up with your W as your gap close and CC, then look to spell-weave Viego’s double auto-attack from his Q passive before using its active to get another double auto-attack off. If you can get Viego’s E up either mid-combo, or even better before you engage, then you can fight in the Black Mist making Viego much harder to target and increasing your damage and chase potential.

Where Viego gets tricky is using his passive and his ult well. If you can pair up with allies on ganks or in team fights to get priority targets low, you can blink to and execute them with Heartbreaker, before possessing them and turning their powers against your opponent. The trick is in either waiting for enough targets to get low you can R-reset your way through a teamfight, or ensuring the right target gets low enough you can Heartbreaker to them and knock other enemies away to isolate them. In a 1v1, you’ll either want to use Heartbreaker to get right on top of your opponent straight away, or save it for the end of a fight to make the most of its missing HP scaling.

The other scruple is making sure you know and understand how enemy champions work. It’s all well and good possessing the fed enemy Lucian, but if you don’t know how to use his abilities and Lightslinger passive you may end up hindering rather than helping yourself.

By the same token, if you possess the wrong character you can end up with less items and damage than not possessing them - you use the enemy character’s while possessing them! You may find it worthwhile to R out of an enemy body with Heartbreaker straight away, rather than hanging around.

With that, our guide is finished. Viego, the Ruined King will go live sometime during 11.2. Look forward to bringing the Harrowing then, Summoners!