Dream did cheat or he’s statistically luckiest person that has ever walked the planet, at least according to the Science Channel's Matt Parker

Gonzalo "mitchmozey" Cardona
Published: Feb 13th, 2021, 15:53
Australian mathematician and comedian Matt Parker broke down the good and bad maths in a way anyone can understand. We think that by this time you, the reader, would either a) know who Clay AKA Dream is and what his whole ordeal with the Minecraft Java speedrunning mod team is about or b) you are already, oh, so tired of it all.

Assuming a) is true and b) is false (hence you clicked on this yet again), the speedrunning case study heard around the world is getting revisited one more time with even more formulas, statistics and math. Who said they weren’t coming in handy later on in life?

Australian mathematician and comedian Matt Parker from the TV Science Channel and the Stand-up Math YouTube channel posted his approach to the nitty-gritty of it all as a bystander to the situation.

As a non-Minecraft player neither a Dream stan, Parker takes the side of science in decomposing the math and feeding it to us like his baby birds in the almost 40-minute YouTube video.

So without further ado, here is everything Mr Parker found in his journey through the complex web of numbers and statistics regarding Dream’s 1.16 runs that were ultimately deemed illegitimate.

Let’s just get something out of the way real quick, and that is that the math done by both the Minecraft Java speedrunning mod team in their lengthy analysis paper and Dream’s on-hire astrophysicist in their rebuttal both are problematic in the eyes of Parker.

"They go into a level of technical detail and language that is so dense that it feels almost deliberately obtuse", explains Parker in relation to the initial investigation. "I don't think it's malicious I just think they were so worried of people going through their argument with a fine-tooth comb that they overdid the technical language."

"I don't think its amazing math communication" and dang it, Matthew, do we agree.

Work like Matt Parker’s gives the audience a peep into the world of probability math and hardcore calculations that revolve around one of the internet’s most influential content creators and speedrunners in the past 10 years. Digestible content for complex topics is what he does best.

The video starts us off in the exact same digits we left off from the research. Matt focuses on two drop rates and two drop rates alone: Piglin-barter Ender Pearl drop ratio and Blaze-kills Blaze Rods drop ratio.

These ratios have been encoded in the game to be 4.7% and 50% respectively-- so, 4.7% of every barter with a Piglin will drop an Ender Pearl and 50% of all Blaze kills will drop a Blaze Rod.

On a side note, for a non-Minecrafter, his knowledge on the matter and the way he knows how important these numbers come to be is outstanding, so props to you Matt. 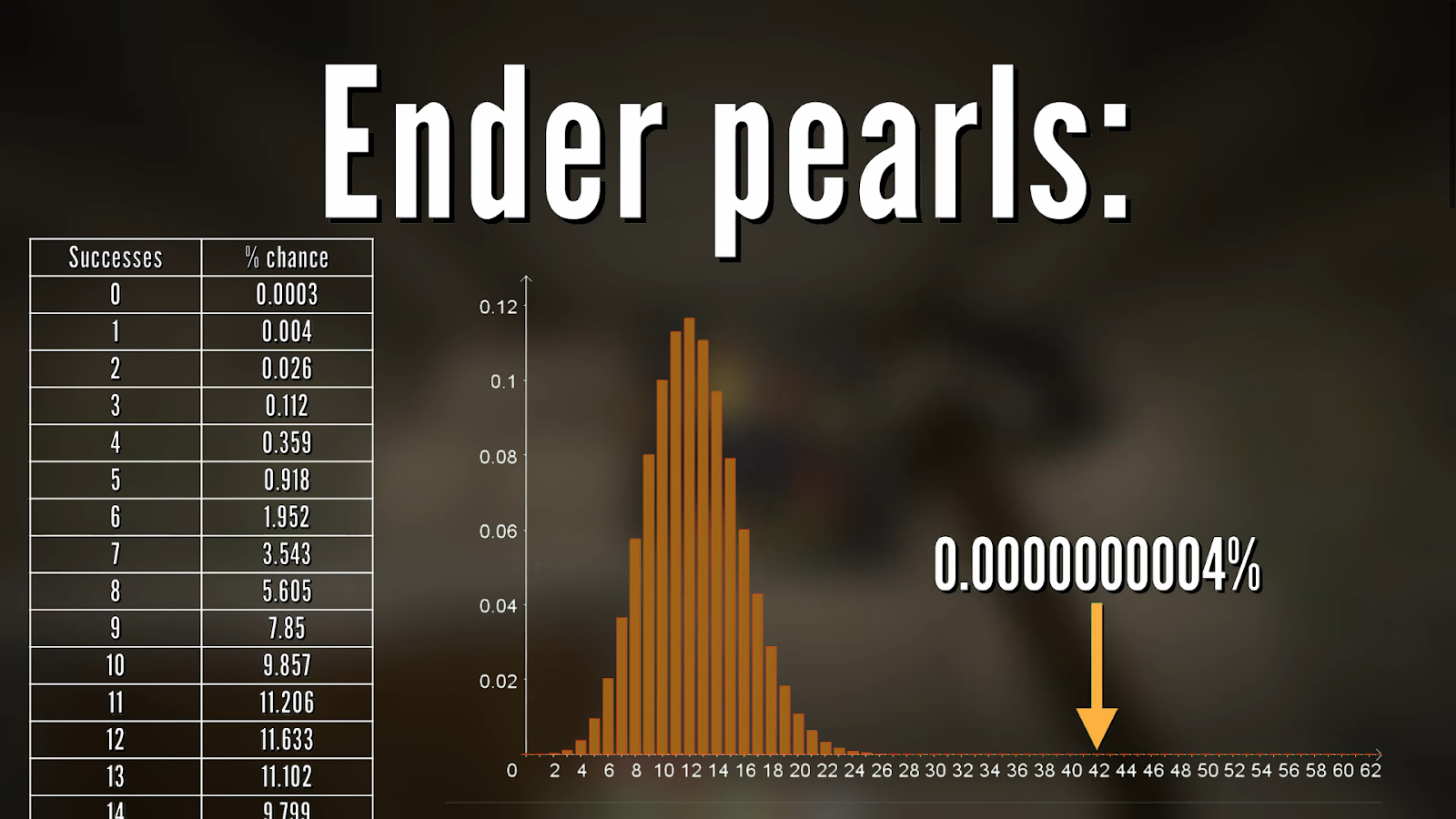 During the six Dream live streams that were investigated and kept track of, there were 262 total barters with 42 successful Ender Pearl drops and 305 Blaze kills with a total of 211 Blaze Rods collected.

The average for these events using the drop ratio provided by Minecraft’s source code should have a lower item total. In 262 barters, with the game’s drop ratio of 4.7%, Dream should have received 12 Ender Pearls on average, not 42.

The Binomial Formula plugged in with Dream’s number of success, failures and probabilities of both

The Binomial Formula plugged in with Dream’s number of success, failures and probabilities of both (Image: Stand-up Math)

Matt, then, used what is called a binomial formula to calculate the probability of success for each of these crazy ratios to happen to Dream-- the 42 pearls in 262 barters and 211 rods in 305 kills, that is.

Mr Parker later compares Dream’s success to Craps’ queen, Patricia Demauro who holds the World Record for most rolls without a seven at 154. You’re probably like “what?”-- just hold on, this makes total sense.

That is a much, much bigger number than either the Blaze Rods or the Ember Pearls odds… but wait, there’s more.

The issue does not lie in how probable or improbable this or that is.

Sure, Ms Patricia broke the world’s rules and rolled something unimaginable by the numbers, who’s to say something improbable like that isn’t to happen in a man-made code-ran video game? Welp, the thing is, Patricia was only taking her chances on Craps.

Matt Parker calculates by multiplying both the Ender Pearls and Blaze Rods drop ratio odds that Dream had a whopping 0.00000000000000000000005% chance of both events occurring the way they did together.

But tell me it wouldn’t have raised eyebrows if she killed in Craps and then Roulette? Same crazy odds, same casino, same person, two different instances. Fishy, fishy.

In response to the bias' that both the initial investigation and later the rebuttal attempted to expound on Parker says it fundamentally doesn't matter - a maths smoke screen.

"If every single human in existence was doing a speedrun of Minecraft every single second for a century, the odds are still you would never see a result what Dream got."

"It's just that ridiculous. There is just no way this happened," concluded Matt Parker.

So there you have it,  Dream probably definitely (some improbable statistic) cheated. The odds say he didn't play clean.