by Gonzalo "mitchmozey" Cardona
Dream, who currently has 14 million subscribers on YouTube, is in hot water after the Minecraft speedrunning team’s paper and documentation was published. Update: Dream has come out to refute the allegations claiming he "did everything the mods asked for," during their investigation.

One of Minecraft's most popular content creators and speedrunners Clay aka "Dream" has had his speed run deemed "illegitimate" by the Java Speedrunning mod team.

The findings, published on the 11th December, took the form of a lengthy analysis paper that looked at six consecutive speedrun's completed by Dream on-stream in October 2020 and found that his "drop rates are substantially greater than those of other top-level RSG runners".

Later in the day, a 14-minute video was posted to YouTube by one of the moderators, Geosquare, showcasing evidence and data analysis, in order to “debunk any misinformation," and make the paper's findings more "accessible".

Allegedly, Dream’s runs have been altered to his benefit using mods or data packs which are undetectable during his live streams. He also failed to provide Mod Folders as he states he “deletes the contents pretty regularly.”

My 1.16 run was just rejected after research due to it being "too unlikely to verify". A video was made by a head mod and Youtuber Geosquare, using my name and clickbaiting "Cheating Speedrunning" in order to get easy views. Definitely a response soon. Total BS!

Currently have multiple moderators messaging me that they believe that the verdict was bias, and that they might quit the mod team. What kind of "investigation" was this?

Thank you for the totally unbiased, 2 month, 29 page "investigation" into whether a 16th place run had "too good luck", that was then made into a clickbait Youtube video by a head moderator (what a shocker)

The paper’s main focus is on Dream’s drop rates for Blaze Rods and Ender Pearls. This fact was brought forward by MinecrAvenger, who posted a tweet on 16th October where he tracked Dream’s trades with Piglins in six different streams and recorded the time stamps for the drops.

That data caught the eye of the Minecraft Java Speedrunning mods, who later reviewed the footage of the streams which spit out the following numbers. 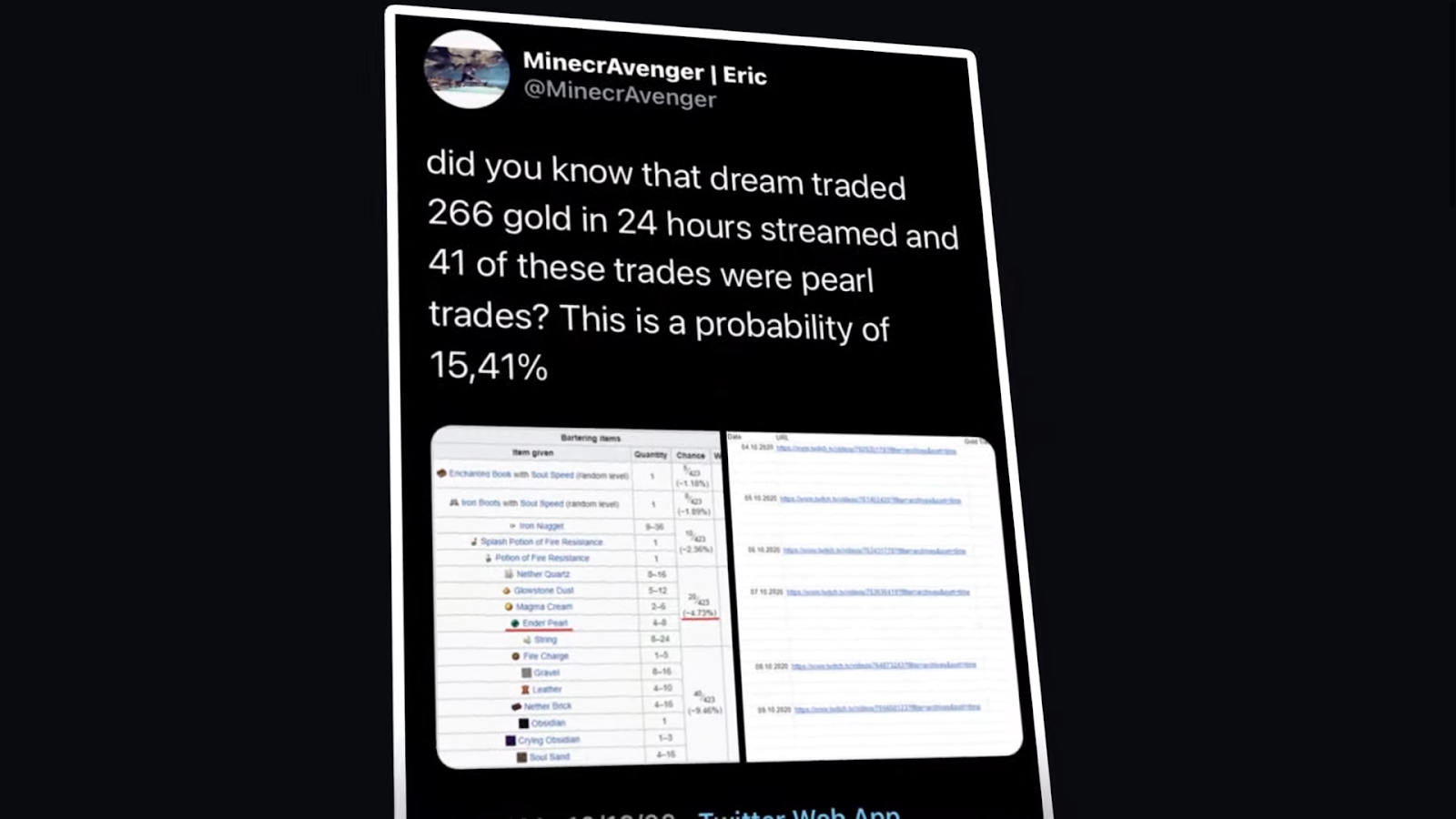 The video then follows Dream’s luck compared to other runners and takes Illumina as an example. Analyzing five Illumina’s streams, the numbers came back as 20 pearls per 323 trades.

After some fancy math, better explained in Geosquare’s video, the chances of getting 20 Pearls in 323 trades is about 9%.

A graph analyzing other top runners’ probability put Dream’s rates even more in perspective, as you can see his line soars above the rest. 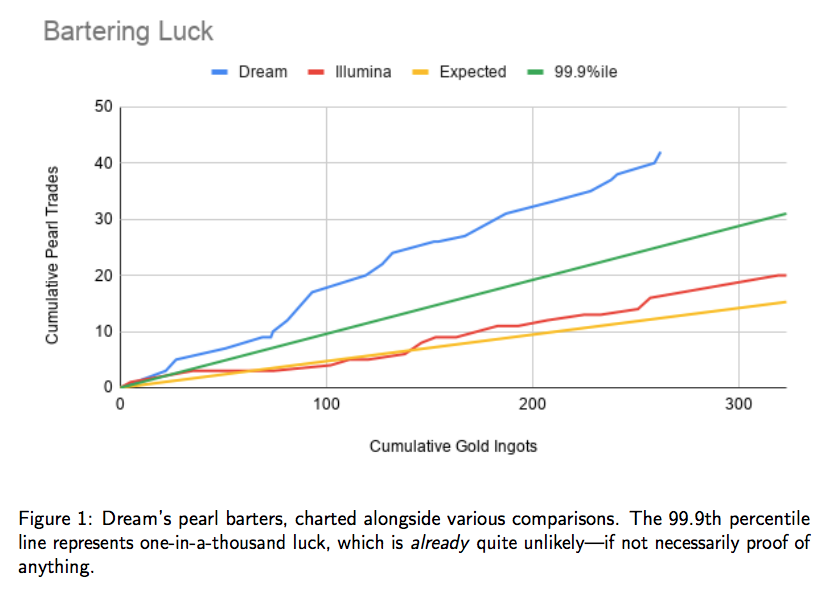 Dream believes he is being unfairly targeted and claims the data in the investigation is “biased”, Geosquare's video provides all the collated evidence that made the moderators of the Minecraft speedrunning community to conclude that Dream’s runs are “illegitimate”.

“The only sensible conclusion that can be drawn after this analysis is that Dream’s game was modified in order to manipulate the pearl barter and rod drop rates”, the paper reads.

The video has accumulated close to 2,000 dislikes since its release.

After the evidence came to light Dream's runs were removed from the speedrun.com Minecraft leaderboard.