by Gonzalo "mitchmozey" Cardona
Keep an eye out when you go online to see if you encounter any of these Rocket League items during your matches. Now that we have uncovered the rarest decals in the game, how about finding the rarest items in general? We know Alpha items are on your mind, but if you can’t fill the other ten spots, we got you covered.

Here is our Top 10 rarest Rocket League items, how much they are worth and the reason why they are so valuable in the community. Nothing says rare like untradeable, am I right? Of course, any Season Reward has its own shine just because of its nature. Every season you play, every season you reap your rewards… but these are no ordinary rewards.

Going all the way back to the original Season 1 from 2015, where there were only four ranks instead of the current seven. Yikes.

At the end of the first-ever competitive Rocket League season, players were rewarded unique crowns for Bronze, Silver, Gold and Platinum ranks. Although these are not tradeable amongst players, just be aware that if you run into any of these, you are playing with or against an OG. 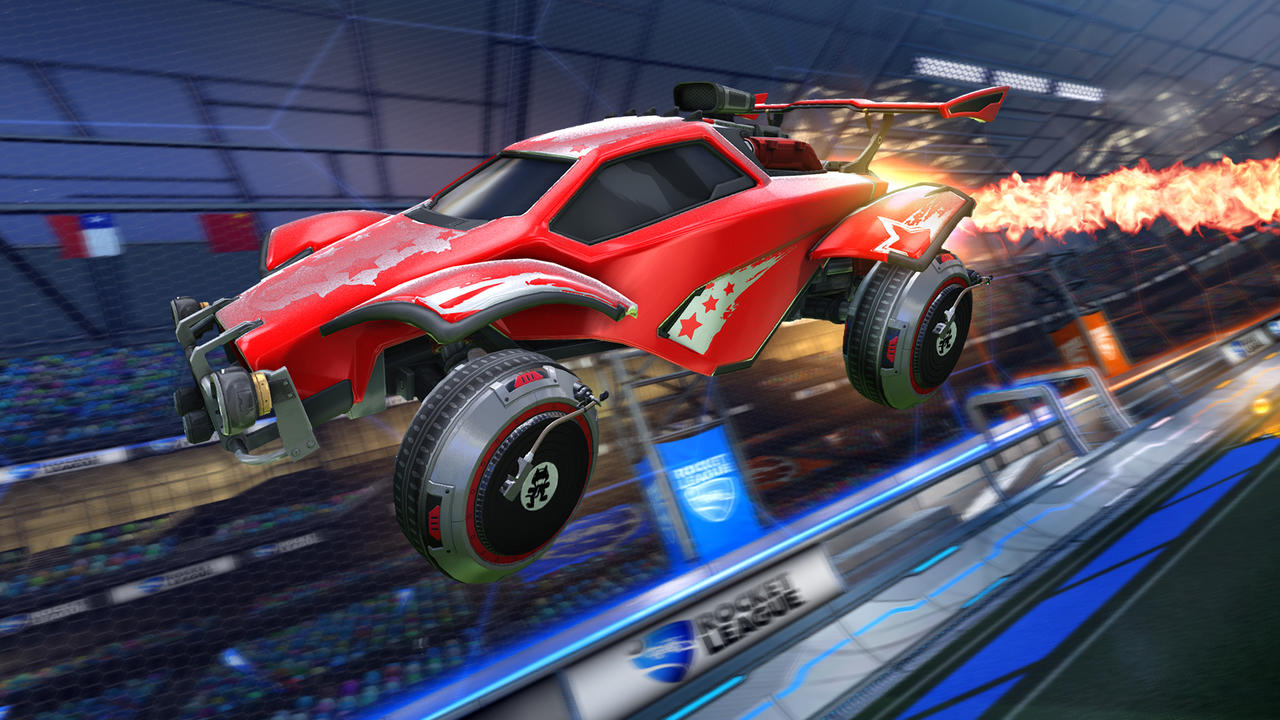 These wheels, plus antennas, banners and more, were available to players who pre-ordered the Rocket League x Monstercat: Greatest Hits vinyl.

You may be familiar with music label Monstercat, as they have scored most of the game’s soundtrack and are currently partnering with Rocket League for the all-new music-themed free-to-play Season 2.

The vinyl is sold out currently, but even if it still were for sale, the items were only promoted for anyone who pre-ordered it, making them really exclusive. The wheels are definitely the highlight of the pack, as they were the first non-boost or explosion Rocket League item that made a sound. 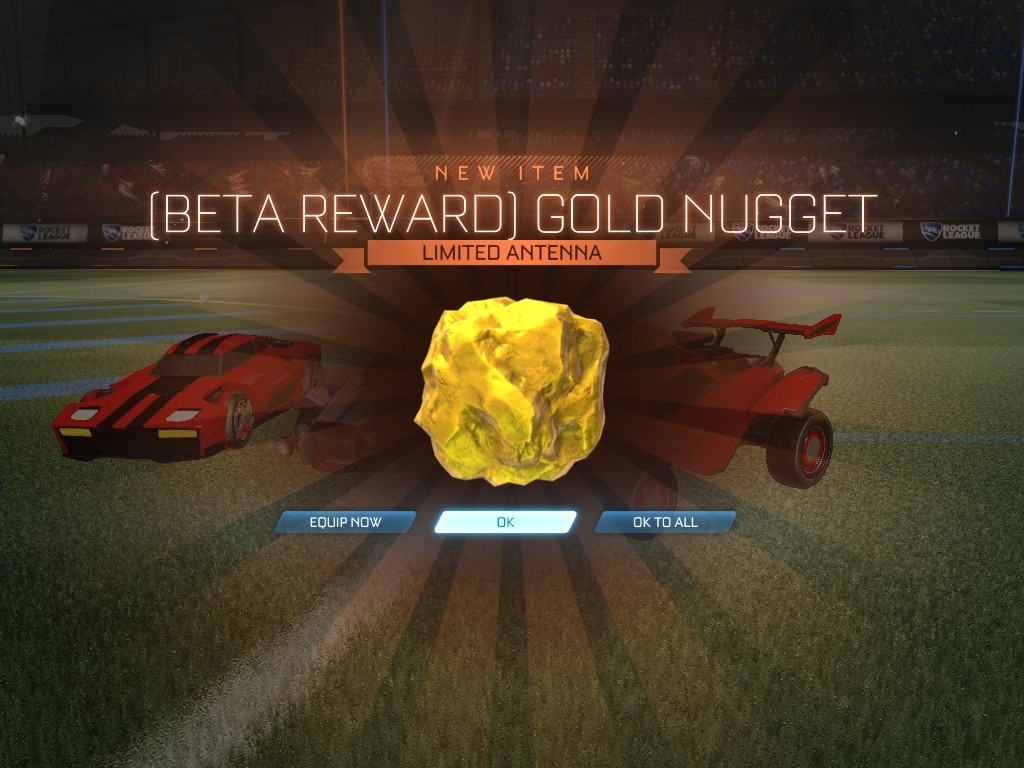 If you are as curious as every other gamer and have hung around Rocket League for the smallest amount of time, you have heard the term "Alpha something" be thrown around every now and then.

Alpha, and in this case Beta, rewards are items dropped into players’ inventories who played the Alpha or Beta versions of the game respectively.

This Beta Reward might seem harmless, especially considering it’s an antenna, but these Ferrero Rocher wrap balls go for 14,000 to 19,000 credits depending on your platform. 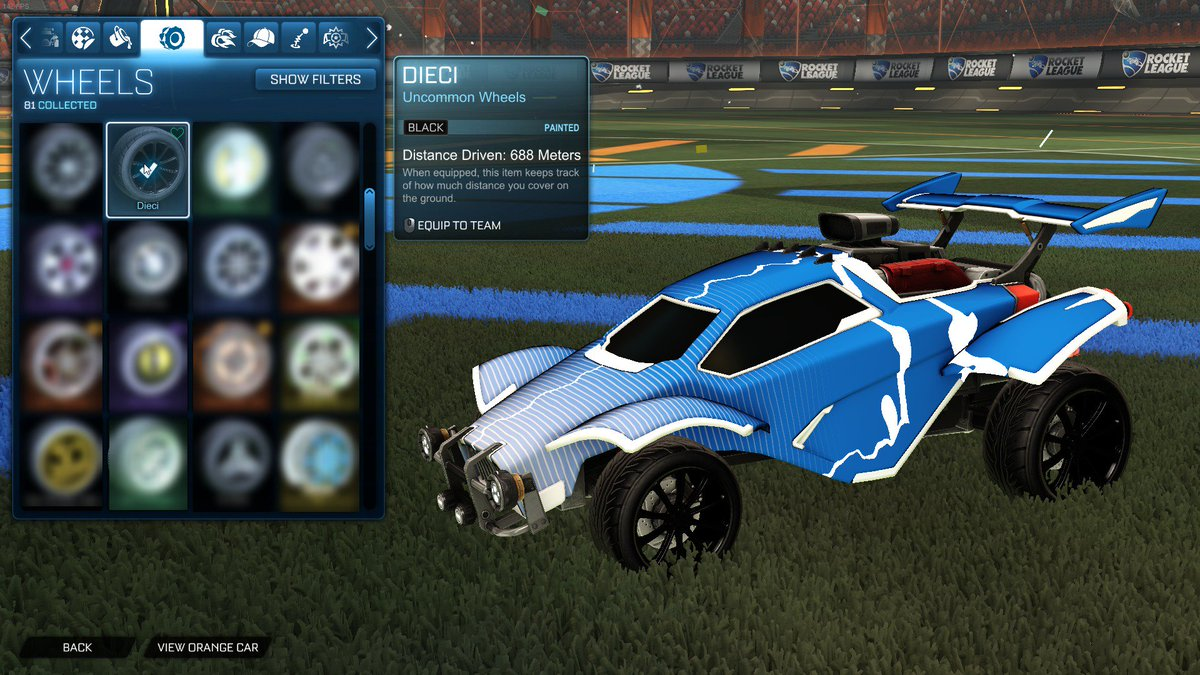 These wheels are in everyone’s inventory already -- the unpainted version of course, because if you want to grab yourself some dark, crispy Black Diecis, it will set you back 19,000 to 24,000 credits depending on your platform.

Painted Diecis are in a league of their own, as they are the most expensive tradeable wheels without any animations or flares. It’s just a render in a colour.

Well, second most expensive, behind our number three on this list. No peeking. These silver and orange wheels were the first-ever RLCS LAN rewards given to fans who attended the RLCS World Championship from Season 3 in the form of codes.

Although they are not tradeable amongst players, a few unredeemed codes still roam around the internet going for $300.

There is just something shady and suspicious when it comes to buying digital items from unofficial sources, so be on the lookout for scams and fake codes. For more scam tactics to avoid, check out our Ultimate Trading Guide for Rocket League.

Here is one for the trading fanatics. Titanium White Apex wheels and Titanium White Zomba wheels were both a sign of status if encountered in-game, the latter being the inferior cousin after its value plummeted thanks to the Item Shop -- marking the beginning of White Apex empire.

White Apexs skyrocketed after the Blueprint update from late 2019 and are currently valued around at 56,000 to 80,000 credits depending on your platform.

Not bad for our only Titanium White item in the list. 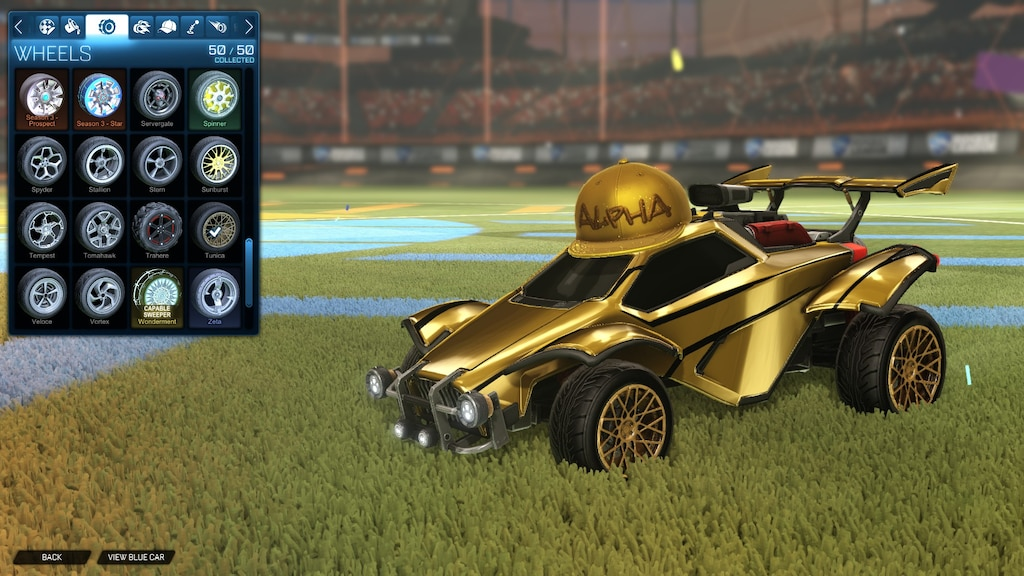 Just like the Beta Gold Nugget, the Alpha Hat (officially called the Gold Cap) was awarded to players who were part of the Alpha testing.

Don’t be fooled by the sideways look and the graffiti-like text, as this topper will set you back 88,000 to 110,000 credits depending on your platform.

Pretty big boy numbers, but we are not done yet. 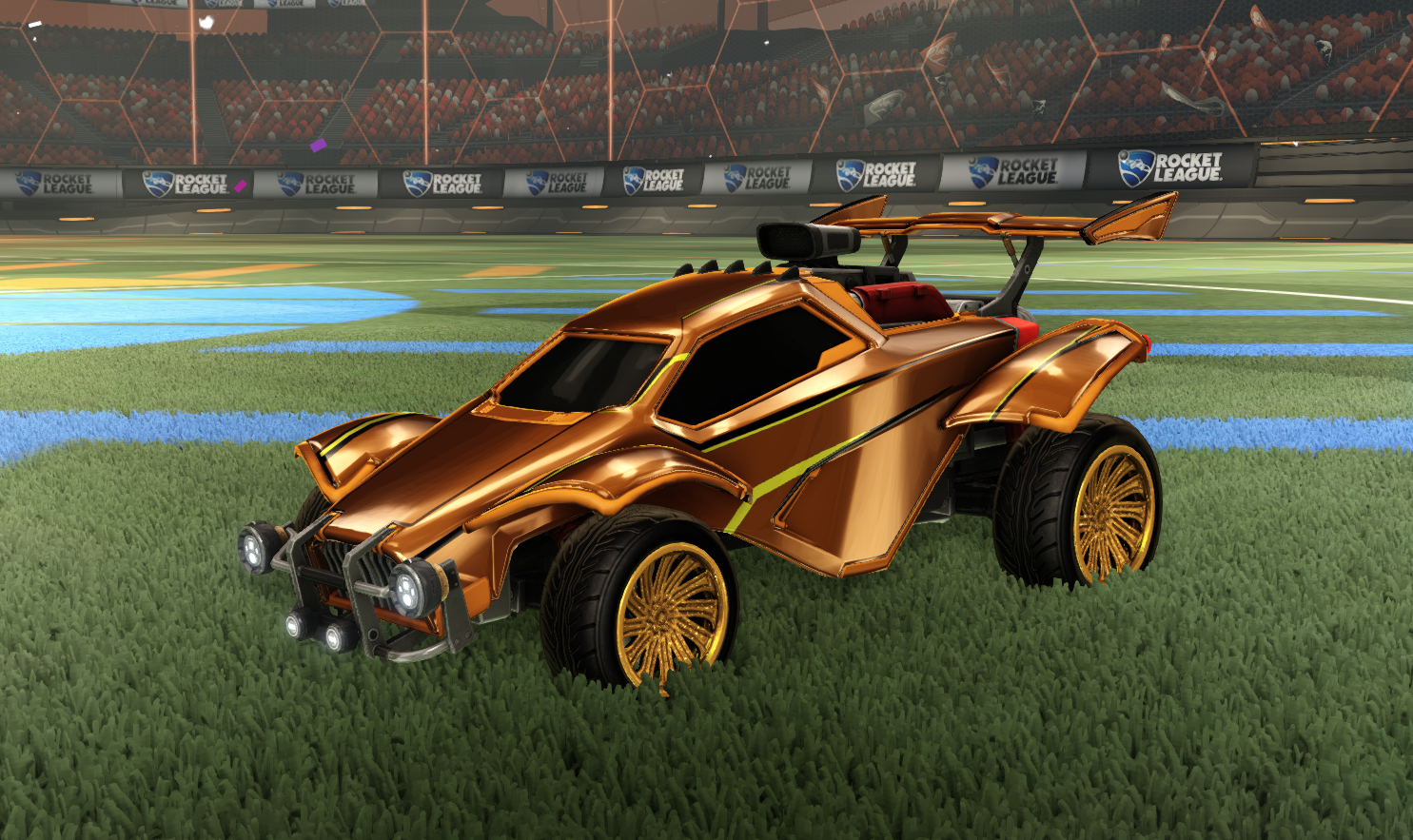 You’ve heard me talk about it enough, you get the idea. Alpha items for Alpha testers. These shiny gold wheels have one of the most coveted rims in the game, with a sparkle that catches your eye and a colour that cannot be mistaken.

Hold onto your screens because you're not going to believe when I tell you that these wheels cost between 300,000 - 400,000 credits. 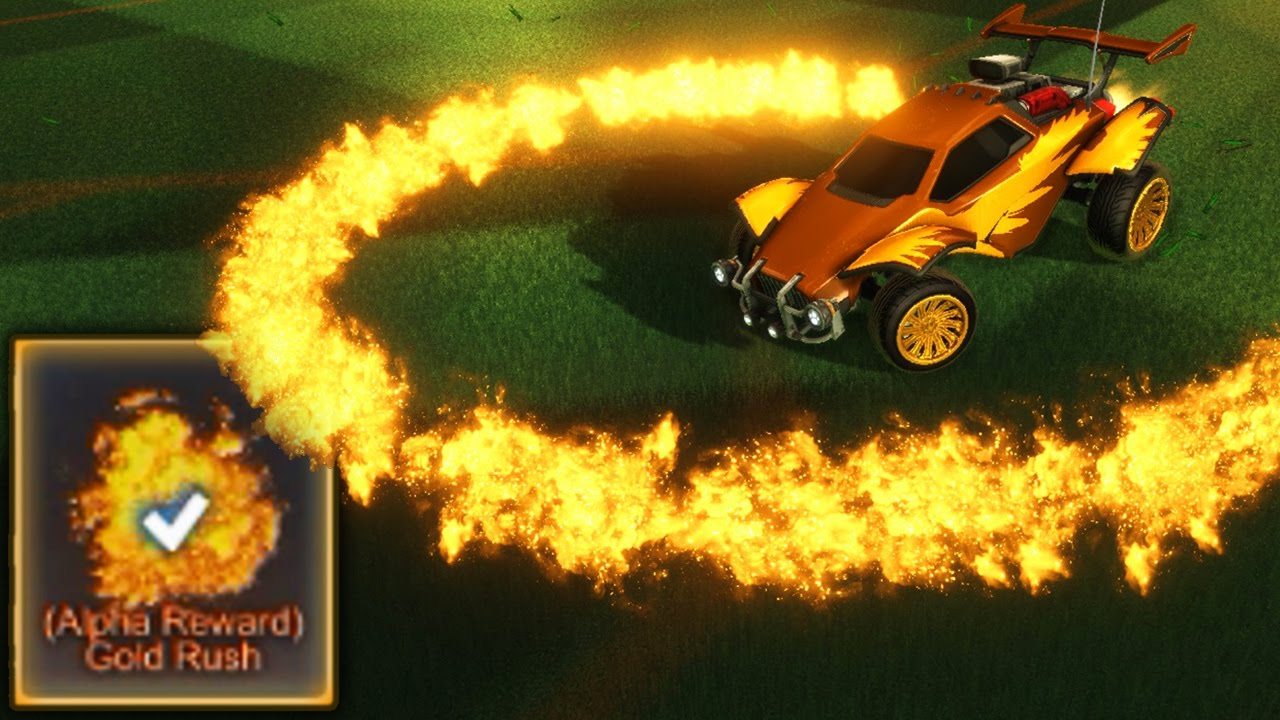 In second place, we have Alpha Reward Gold Rush, better known as Alpha Boost. You will see most Rocket League pros rocking it every match in the revamped RLCS X because it is a sign of longevity -- or purchasing power, either or. Best for last and you’ll be surprised why. The rarest item in Rocket League: the White Hat. Maybe you were expecting an Alpha Octane or something, but this is better, trust me. This is pure Rocket League lore.

White Hats are only given to users who have found repeatable game-breaking glitches or exploits and are rewarded exclusively by Psyonix. Yes, that Psyonix.

The word on the street is that there are only 20 to 25 hats in circulation right now. There are around a million to a million and a half players online every day. Take that for perspective.

And it gets better. These White Hat owners have their own Discord server -- like a cult.

Although it is tradeable amongst players, there is segregation in the server. You can either be someone who earned themselves the White Hat and stay forever (even if the hat has been traded away) or you can be a White Hat owner by trading, but your tenure in the server ends when your possession of the hat ends.

YouTuber and Rocket League content creator, Rocket Sledge, has an amazing short-film on his channel regarding the craziest stories surrounding White Hat owners, and what went down when he owned one himself:

And that’s about it. If you ever run into any of these ten items, take a screenshot, save your replay and boast all you want as you have found yourself upon a gem and had the privilege of sharing the pitch with a legend -- or a very, very rich player.