by
Nikola Savic
The Minecraft star urges his fans not to "send any hate," but some of his actions are making people question his intentions. The Dream saga continuous even after the YouTuber has admitted cheating during the infamous speedrun from December of 2020, something he has been heavily denying at the time.

Following the confession of "unintentional" cheating, the Minecraft superstar has come under heavy criticism, with many members of the speedrunning community questioning his honesty and truthfulness of the confession, believing that was he's saying is not entirely true. While Dream acknowledges that people have the right to criticise him for his mistakes, he emphasizes that he is not a speedrunner, but only a YouTuber who like to do speedrunning for fun with friends.

What he doesn't like is that people are trying to take away his success and downplay everything he has achieved, which he says has nothing to do with speedrunning.

And although he has many disagreements with his haters and people who want to discredit him, Dream has recently tweeted out that doesn't mean that it is okay for anyone to send hate, threats, and harras other people with whom he disagrees.

Death threats and harassment is never okay. I'm cool with and have worked it out privately with the head moderator that made the original video and received the brunt of the hate. I also said on my most recent stream multiple times that death threats are never okay.

But some are questioning his sincerity in regards to this statement and if he really condemns the actions of his fans. Just hours prior to this Tweet, Dream was live-streaming his reactions to "hate videos", that is videos of people who are claiming that his confession is not an honest one.

YouTuber fireb0rn, known for his Hollow Knight speedruns, made a video in which he calls Dream's apology fake and goes into details on why he thinks so.

Dream searched for this video while streaming, as he wanted to do a live reaction and refute his claims. 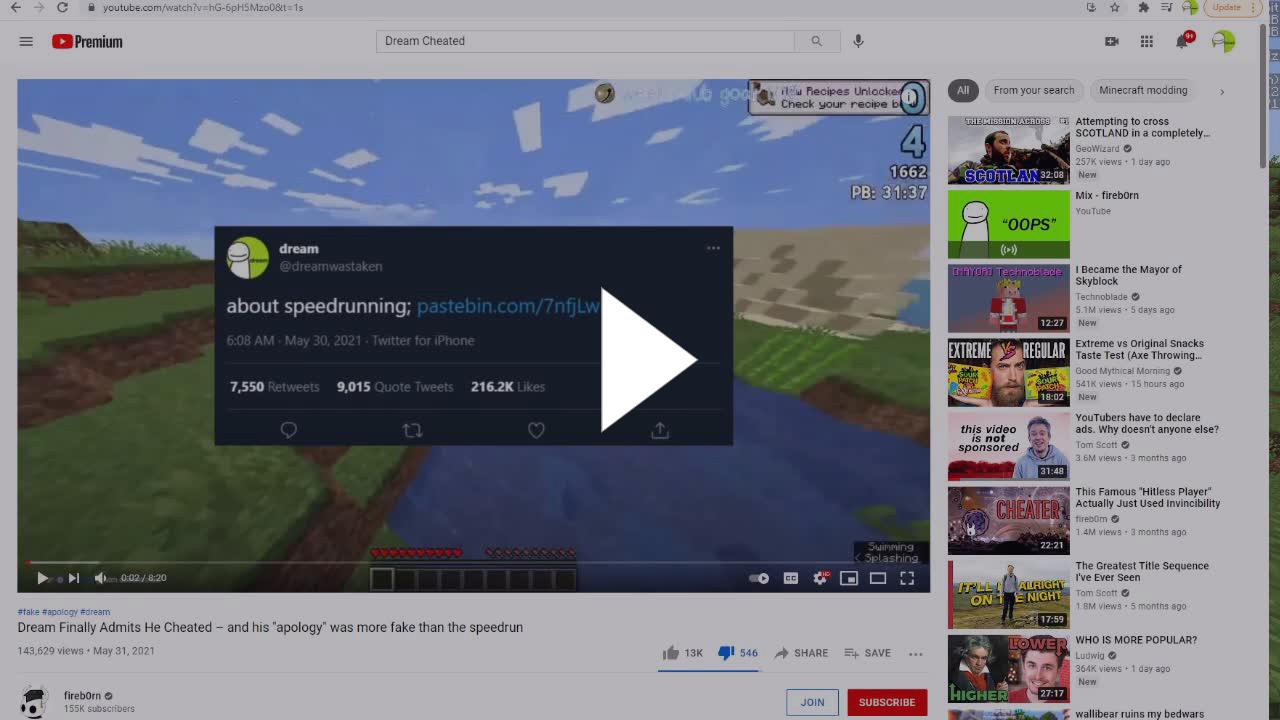 And while Dream did urge his fans not to "send any hate", the video has been disliked by him personally, which was clearly visible on the stream and he even laughed about it.
Additionally, he didn't hide the YouTuber's channel name, which resulted in his viewers dislike-bombing the video. When Dream watched it, the video had around 500 dislikes, but at the time of writing, it has been downvoted by almost 6,000 people.
Dream soon after posted once again that he absolutely condemns any kind of hate and toxicity, in an effort to explain that he has no control of what his huge fan base is doing.

someone needs to make a compilation of all the times I've disavowed hate and toxicity and told people not to hate on others, and specifically called it out on twitter, live streams, videos, podcasts and reply it to anyone that continues to push the narrative that I let it happen

"Someone needs to make a compilation of all the times I've disavowed hate and toxicity and told people not to hate on others," Dream wrote, claiming that people are pushing the narrative he is the one sending his "stan mob" to harass his enemies.

At the end of the day, the situation is unfortunate for everyone involved as stan wars have never brought anything good to anyone and they often escalate from usual internet hate to something much worse, which can significantly affect the mental health of involved people. Hopefully, everyone can learn from it and move on, and that includes not just internet celebrities, but their fans as well.