Twitch removes Winnie the Pooh in bikini emote for being "sexual", streamer claims

It seems that whenever there's a hot topic on Twitch, the platform always finds a solution that will somehow bring even more controversy and ambiguousness in regards to its rules.

Because Twitch doesn't consider this type of content as sexually suggestive, Twitch streamer Peter "Pedguin" Mann wants to know why did they remove his pedTub emote. 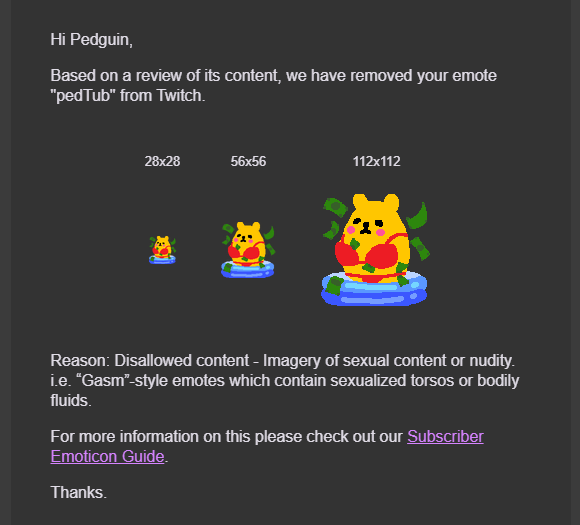 Pedguin on Twitter The Saga continues.My pedTub emote got removed, after twitch MANUALLY approved it.This baffles me as sexual suggestiveness is a spectrum that involves some degree of personal interpretation of where the line falls, why does Twitch find my pedTub sexual? Please grow up. https://t.co/uTcPxXmNpw pic.twitter.com/qRsZDWlmsg— Pedguin (@Pedguin) May 24, 2021 Pedguin Twitter

"This baffles me as sexual suggestiveness is a spectrum that involves some degree of personal interpretation of where the line falls, why does Twitch find my pedTub sexual?" Pedguin asked. "Please grow up."

The pedTub emote depicts Eggdog Winnie the Pooh wearing a bikini and sitting in an inflatable pool, both common "props" of the hot tub streamers.

The emote also shows money flying around, which seems like a small joke suggesting the hot tub streamers are earning a lot of money, but it doesn't seem like something offensive.

Asides from this particular emote, Pedguin has a long history of other banned emotes, and some of them do look like they were removed for the rightful reasons. Twitch's explanation for removing the Winnie the Pooh in bikini emote was that it has "imagery of sexual content and nudity" despite Twitch already having several emotes with bikini and recently creating a new category for that kind of content.

It seems that there are still no clear rules in regards to what Twitch considers "sexual content" which will only further create situations like this, where different content representing essentially the same thing is treated differently, and that's an issue for which Twitch will need to find a permanent solution or it will only continue to aggravate some streamers who feel like they are being treated unfairly.