Twitch icon, Felix "xQc" Lengyel, recently slammed an article by GameRant about Ninja's latest Twitch viewership figures. xQc explained that the wording of the article made it seem as though it was a bad thing that the Fortnite star was streaming a different game title, despite his viewership dropping by a half.

Frustrated, xQc later criticized the writers and explained that "exploring unchartered territories" was the reason top streamers are "number one" in the first place.

xQc explained that the basis of streaming was about sharing something that you love with others. "It's not about the people who are number 1, getting all the trends. Nobody cares about this", he said.

He further indicated that those streamers wouldn't be number 1 if they didn't "try new things" or if they didn't "explore unchartered territories". As a top streamer, we'll take xQc's word for it and trust that he knows exactly what he's talking about. 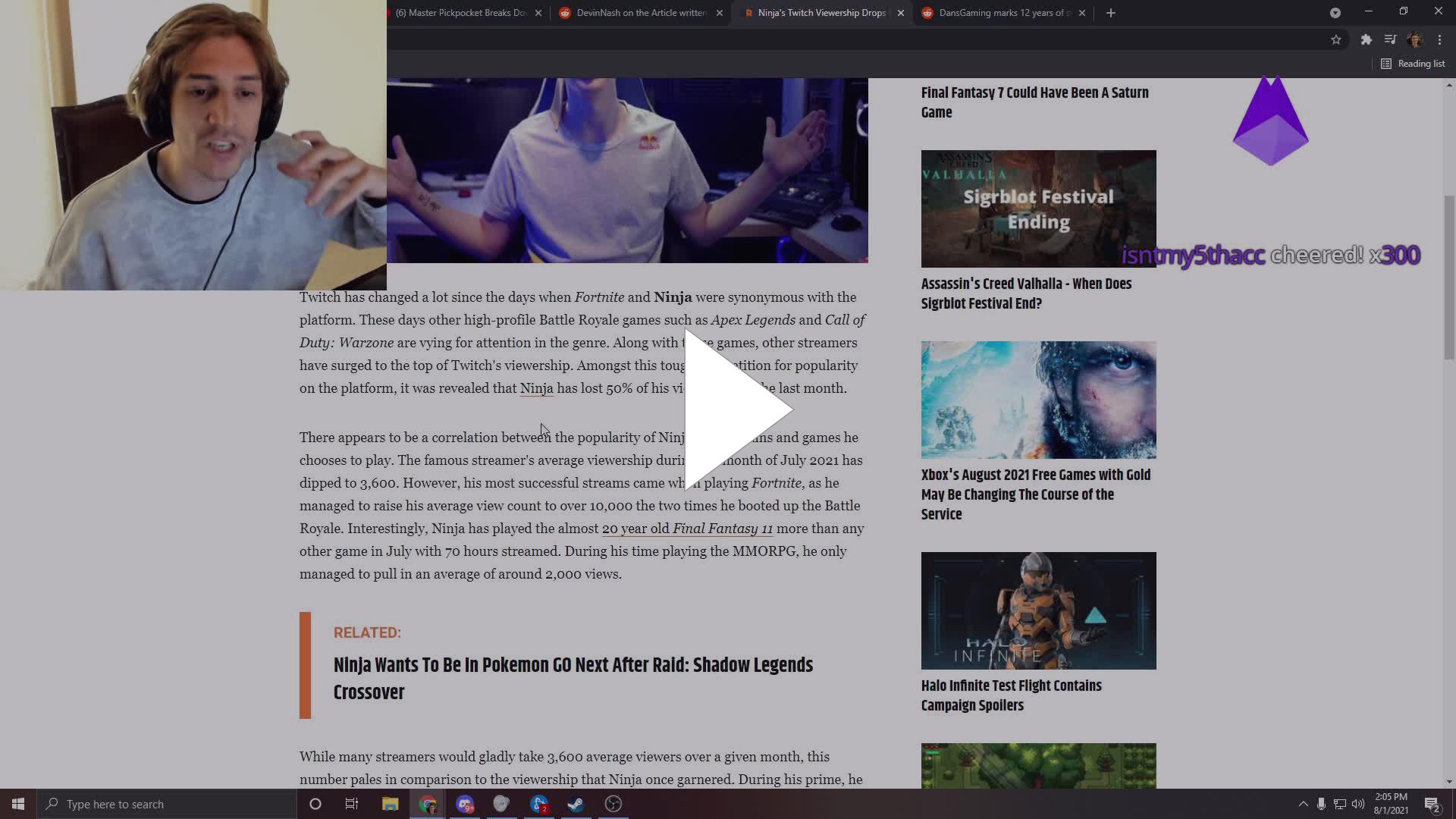 He further explained that "shutting down patterns of attempting new stuff" is "stupid" and "dumb". He went on to say that streamers are not like robots and if approaching their streams in this manner, it would make "streaming stale and boring" and we certainly agree.

"It's this language that makes people think that this is what they have to do. It's dumb as s***. F*** this", xQc concluded.

Twitch streamer, Devin Nash also shared his opinion on the article in a tweet posted on the 1st of August.

"It speaks to how obsessed we are with clout that people view this as a failure. Guy has 25 million dollars. He streams a 19-year-old game for fun and is still top 0.1% of Twitch. This mindset that everything needs to be about viewership is toxic for creators", he said.

It speaks to how obsessed we are with clout that people view this as failure. Guy has 25 million dollars. He streams a 19 year old game for fun and is still top .1% of Twitch. This mindset that everything needs to be about viewership is toxic for creators.https://t.co/cmNuSSzLxT

We have to agree with Nash here. It's no easy feat to achieve the success that Ninja has on Twitch.

Other notable streamers reciprocated Nash's sentiments. Ludwig Ahgren said that it was an "embarrassing article to have [been] written".

Embarrassing article to have written

Gamba streamer, Tyler "Trainwreck" Niknam criticized the writers, saying "all the miserable f***s that write esports articles clickbait the title" to get reactions out of readers and the community, calling esports journalists "the scum of the industry".

unfortunately, all the miserable fucks that write esports articles, click bait the title this way in order to get someone “in” to react to it the way you did and people like asmon & i to respond to give it more clicks, this is why esports journalists are the scum of the industry

We have to disagree with Train here. The majority of credible journalists inform the public on pertinent affairs by reporting in a manner that is both neutral and unbiased. We do, however, agree that the article title was clickbait and was not reporting in a neutral tone.

Although the article didn't outright call Ninja's latest viewership figures indicative of being a failure, the tone of the article was more apparently suggestive of this sentiment.

This is overtly contrasted by Dexerto's article, entitled "Ninja’s Twitch viewership drops by 50% but he’s still in a great spot", which reports on the exact same story.

We agree with xQc's stance that streaming should be about sharing the passion around the gameplay experience with fans. Ninja is an insanely successful streamer on the platform and we doubt that he cares about his viewership stats, so long as he can continue doing what he loves.