Pokimane hits back at Fed's 'exposé' with receipts of her own Published on November 30th, 2020
Update: Fedmyster has put together yet another document, this time released deliberately, where he claims that sexually harassing Yvonne wasn't the reason he wanted to fire her. Pokimane replies, "who asked?"

Update: The leaker of Fed's "My Truth" document has come out to defend her actions claiming Pokimane was only working to "protect her image".

Pokimane has further defended herself against accusations of being manipulative from Federico "Fedmyster" Gaytan by releasing her own statement, with receipts, that paints Fedmyster as the manipulator and insinuates that he deliberately leaked the initial document that re-ignited the controversy around his departure.

Fed's original document claimed that Pokimane was "twisting" the narrative around their relationship in an attempt to distance herself from him after he was booted out of the OfflineTV house after Fed was the subject of accusations of sexual misconduct by fellow OTV members, Yvonne "Yvonnie" Ng and Lily "LilyPichu" Ki. Pokimane finds herself in the middle of yet another controversy (Photo: Pokimane)

While it seemed that Poki herself had put an end to it by streaming her breakdown of the exposé bit by bit, and Fed apologising for using private conversations with Anys and other OTV members in the document, Pokimane clearly felt that more needed to be said to put the matter to rest.

Posted to Pokimane's secondary Twitter account, the 11-page document strongly suggests Fedmyster wanted the document to be leaked, despite claiming that it was out of his control.

"He would tell me he'd speak to his viewer and have the Google docs deleted. It kept happening multiple times afterward, making it hard for me to believe that he didn’t want this to be shared."

Following up on the prelude, the big point Pokimane wanted to address was her stance on Yvonnie's role within the OTV household.

According to Fedmyster's statement, Poki wanted her out of the company as Yvonnie was leaning into content creation despite being signed as the house's manager and Imane's personal assistant.

"Yvonne was a sore topic for him where he would continuously complain about her. He would complain that he was taking on her workload and that she would deny his attempts to get her to do work on OTV and stream instead," Pokimane wrote, sharing screenshots of conversations held with Fedmyster held in May 2019.

Pokimane alleges that since no one at the time knew about Fed's actions against Yvonnie, OTV members agreed with him in that "there was a problem that needed fixing."

"At this point in time, no one else in the OTV house had the context that Fed had touched her inappropriately," Pokimane explained.

Pokimane also refuted Fed's claims about their trip to Las Vegas - an example Fed used to paint Pokimane as someone who leads others on.

Pokimane claims those conversations were "taken out of context" and that, in reality, she, Yvonnie, LilyPichu, and Fed were possibly going to share a room, while Fed tried to paint it as just he and Pokimane who would be sharing the room.

"I messaged him and told him WE (plural as in myself and the girls) had a hotel room. I wanted for us to all stay together in his much larger room for fun, unless he wanted to stay alone so he could be at liberty to bring any girl home with him." 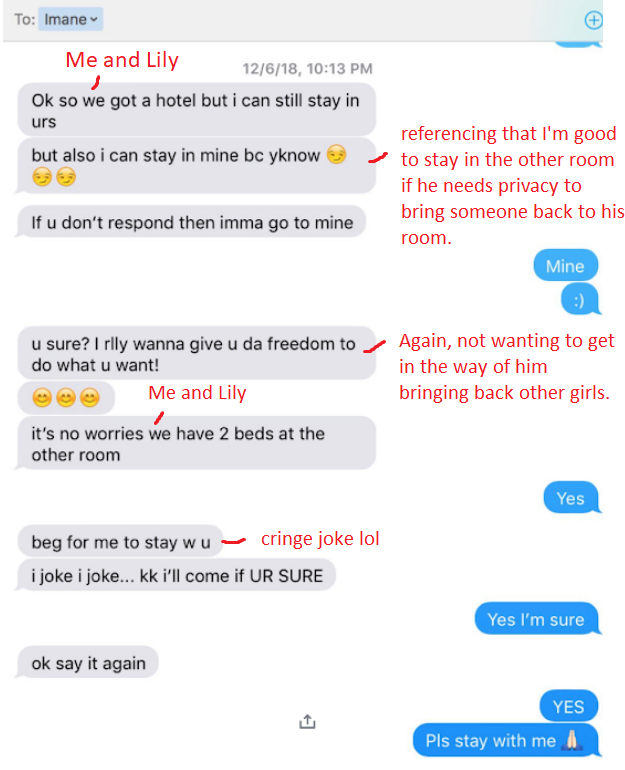 Pokimane closed out by saying that their relationship had no impact on Fed leaving OfflineTV and that all the screenshots shared in the document were shared with the permission of everyone involved.

"I hope this context shows my side of the story and helps put this to rest," Pokimane finalised.