Imane "Pokimane" Anys has provided a rebuttal to the leaked Federico "Fedmyster" Gaytan's leaked exposé which claimed the former had "manipulated the narrative" around Fedmyster's leaving of OfflineTV after he was accused of acting inappropriately against other members of the house. Including an instance when he had “crawled in bed” with Yvonne "Yvonnie" Ng, kissed her cheek, and put his hand up her shirt.

The exposé in question was devised as a response to Pokimane's video published in the immediate aftermath of Fedmyster's removal from the OfflineTV house.

In video, Imane described how Gaytan ruined her time at OTV by conceiving lies such as Fed telling mutual friends they were in a relationship and oftentimes acting manipulative looking to seclude her from the rest of the crew. Fedmyster and Poki had seemingly made peace with each other (Photo: Fedmyster/Pokimane)

In the leaked doc, Fed rebutted claims made in Poki's video, claiming that she was "twisting" the narrative in her favour, going as far as sharing private conversations from Pokimane, both with him and fellow content creators.

Eventually, the 24-year-old confirmed she would be addressing the piece in her upcoming Twitch stream.

Pokimane started her stream by confirming she had seen this document previously, up to three times no less. 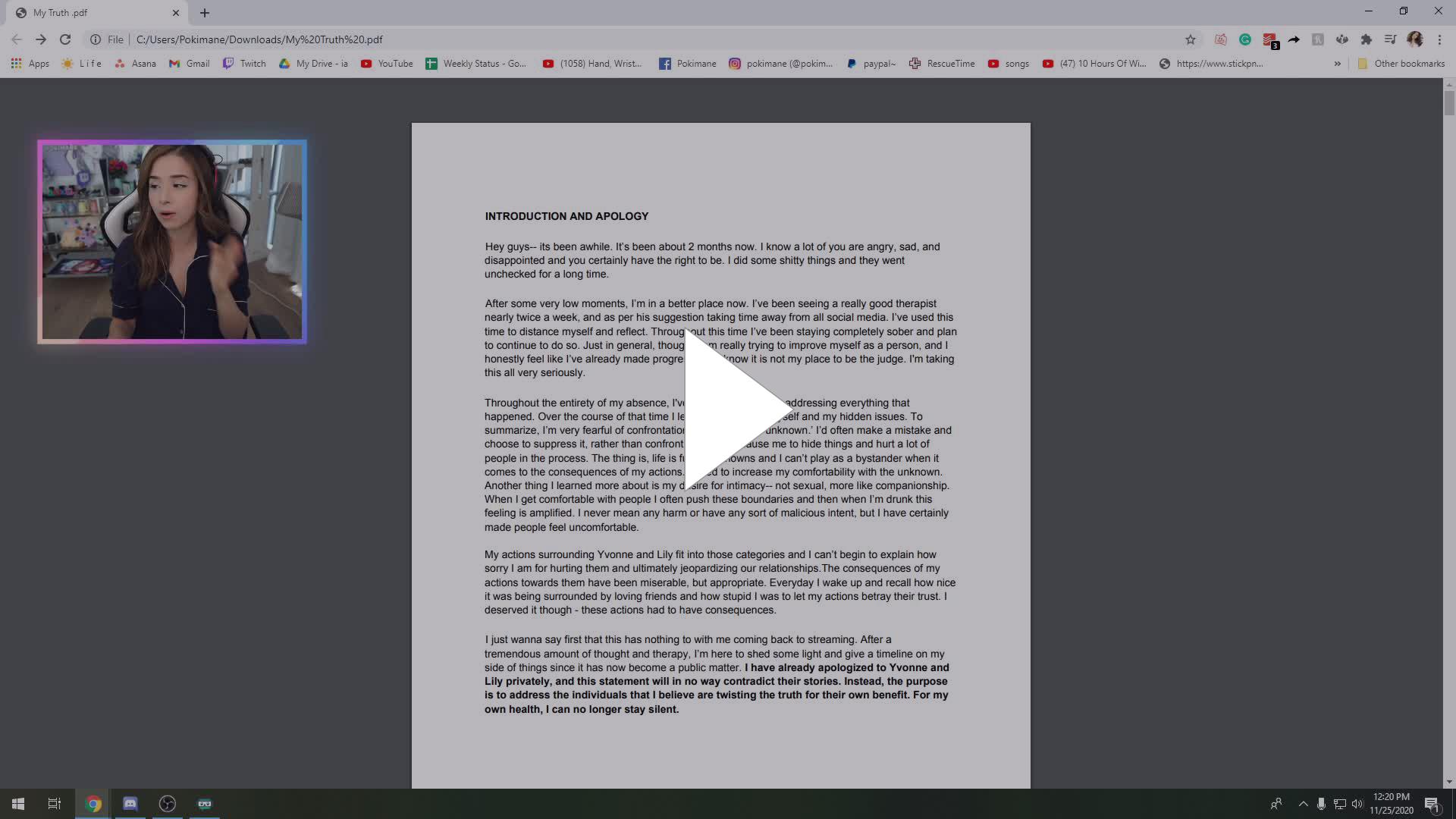 "I wanna say, I've seen three versions of this document already. As you can tell it was made months ago, it has not been two months since the incident," Imane said.

She added that the written piece was sent to friends and herself, with Fed eventually reaching out to discuss matters privately without needing to go public.

At one point during Poki's video, she mentions how Fedmyster scared a potential love interest of her by lying about their relationship status, claiming they were both dating, which was not true.

Poki said during the stream that Gaytan pleaded that she left this information out of her video, something that in the eyes of Anys, is an "admission of guilt." 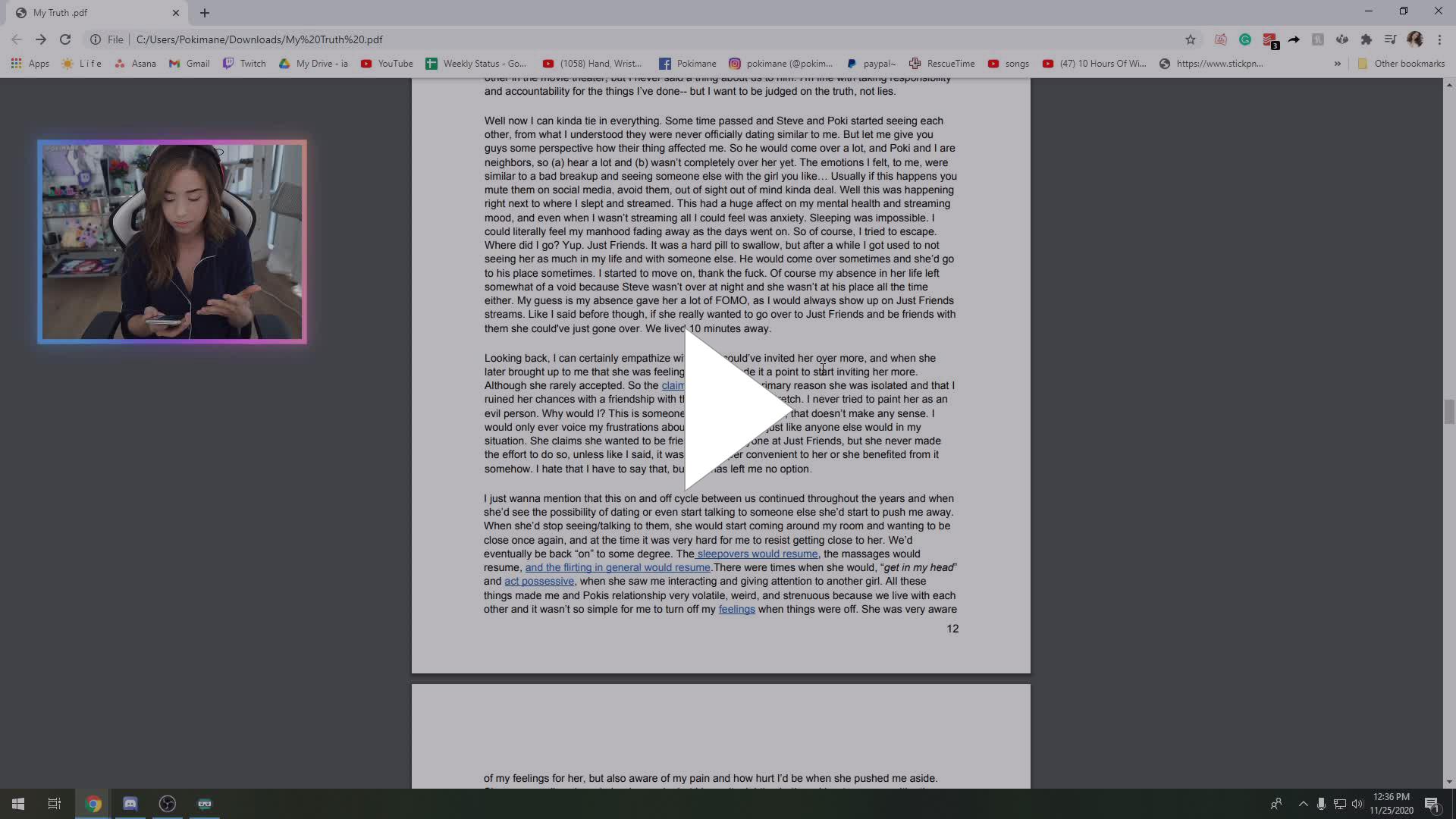 "Now, months later, he's saying 'oh no that's not how it went down,' and obviously it's his prerogative to say that, but I have been told and have been believing what I've been told for however long," she continued, reaffirming her stand on Fedmyster's lie.

Poki skimmed through Fed's document a bit more while on-stream and reached a point where she admits a bit of selfishness stemming from her, as the mixed signals Fedmyster claims in the document were apparent to her as well. 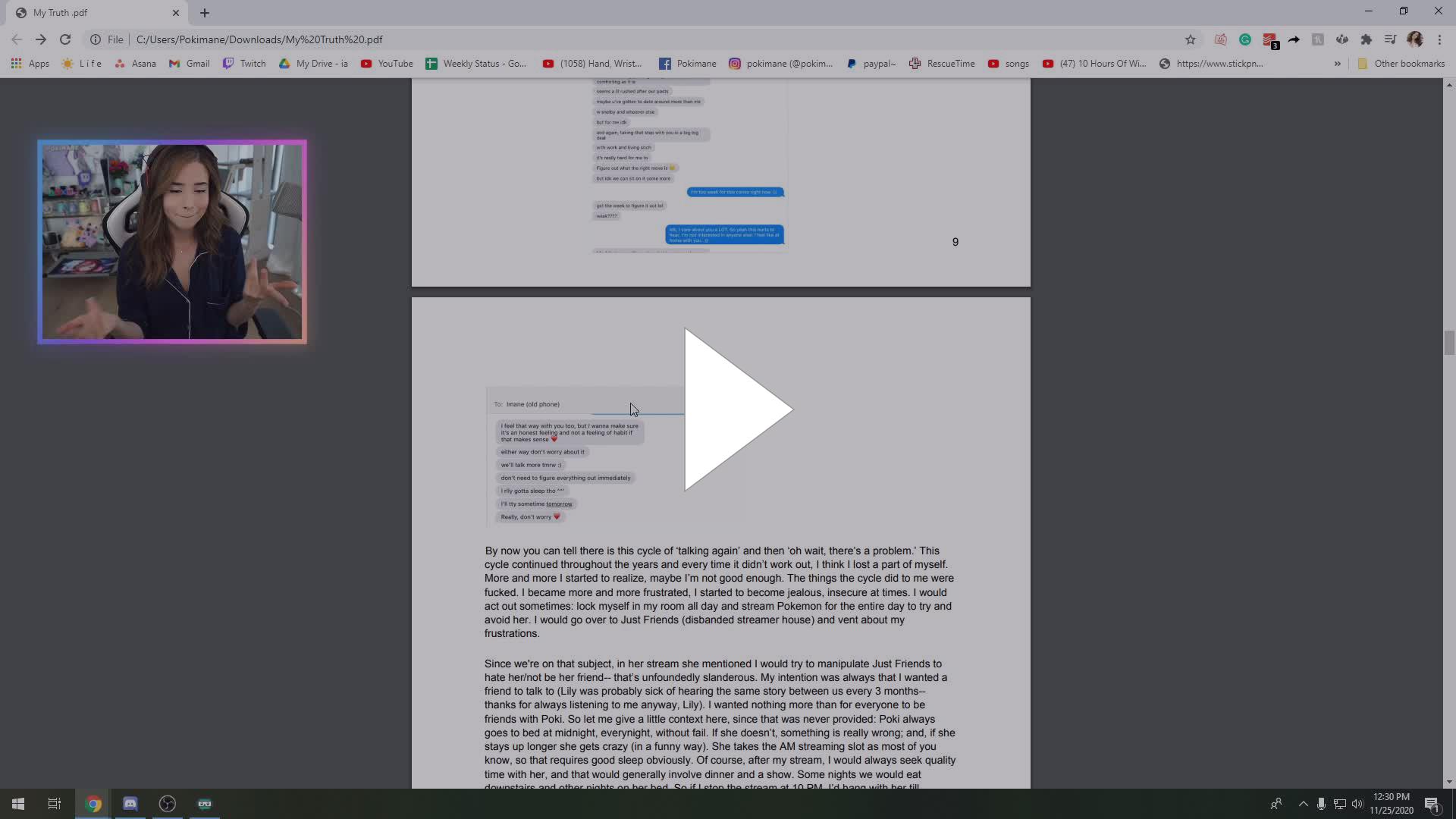 "(I said) I want to still be friends, and still be close, but I think he read that as signs of maybe wanting more. There was like this cycle of 'we get close, and I think you think this is headed in a way that it's not headed.'"

Eventually, the Twitch streamer reached a point where she simply called all this ensuing drama "bullsh*it" and "irrelevant", as it takes attention away from Fedmyster's actions against Yvonnie and Lilypichu. "I should've been more aware and careful of how I acted around him. In all honesty, all of this is not that important, it's regular 20-year-old relationship bullsh*t." 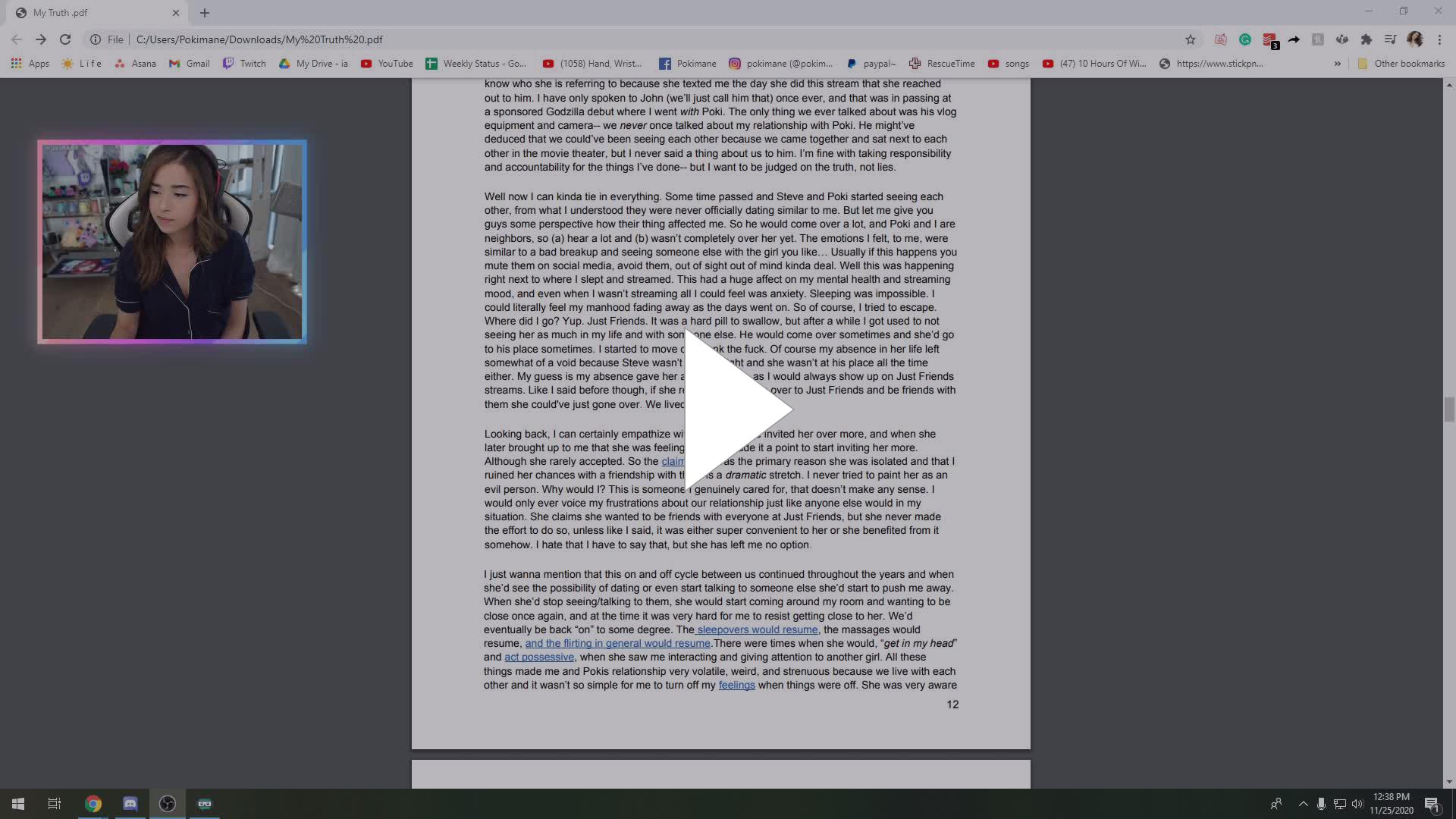 Pokimane also clarified her original comments made in the video that painted Fedmyster as the one pushing for Yvonne to be let go from OTV, something Fed rebutted calling it a lie.

"Fed didn't directly try to do that (get her fired). Her lack of motivation stemmed from what Fed had done to her, and the fact that she didn't wanna interact with him. So, no, he didn't try to get her fired, but what he did to her made her so unmotivated that she almost lost her position." 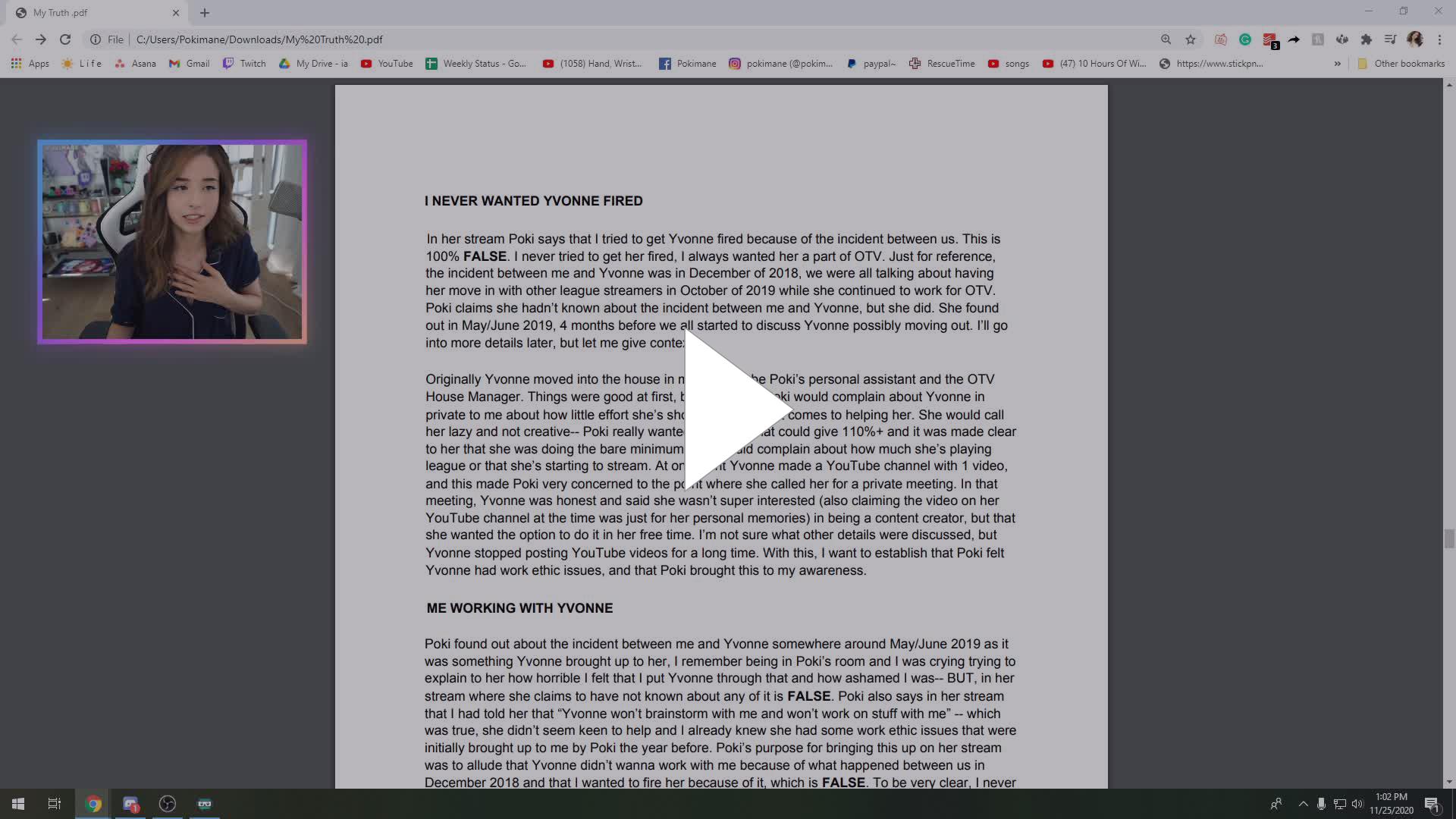 After her stream, Pokimane wrote on her alternate Twitter account how hard it was for her to open up on such a public platform like Twitch and talk about personal matters.

sorry td was tough, it’s hard for me to reply to v private things without making the situation messier + i was not in a good headspace.

ty to those that were understanding, lookin forward to moving on ðŸ‘ðŸ¼

"Sorry td (today) was tough, it’s hard for me to reply to v (very) private things without making the situation messier + i was not in a good headspace."

Seems that those expecting the situation to escalate even further might have left disappointed, as Pokimane put the issue to rest, hopefully, for good this time.