by Wessel Minnie
We take a look at streaming sensation Amouranth, including her career so far, cosplay, hot tub antics and how she became one of the biggest Twitch streamers. Published on April 4th, 2021
Amouranth is one of the biggest content creators out there, with daily posts on various social media platforms as well as YouTube and Twitch content. She is one of the biggest female streamers in the world. If you want to know who Amouranth is, we've got you covered with a full bio, details about her cosplay career, her massive following on Twitch and much more.

Amouranth Bio: Who is Kaitlyn Siragusa?

Before we get into the thick of things, it's always nice to have some quick facts about a Twitch streamer. Check out a list of facts about Amouranth below, starting with her age, real name and nationality.

Amouranth's content is quite diverse. She has a passion for video games and characters from multiple genres which you can clearly see in her cosplay, be warned that you will likely see her with very little clothes on most of the time via streams, Instagram and much more.

Amouranth is an extremely talented cosplayer, starting her journey over a decade ago back in 2021. She taught herself to create costumes, and eventually, she was discovered by the Houston Grand Opera and Houston Ballet in Texas, US. Amouranth cosplays a variety of gaming characters, including the likes of Tracer from Overwatch. There's also some fantastic comic book cosplay from Black Widow to Wonder Woman, and much more.

She even started her own cosplay character company for children's entertainment. She has even appeared on Discovery Network's "The Little Couple" show twice, and companies or events can book her for an appearance on her website. While her cosplay skills are undeniable, Amouranth shines in several other departments, including Twitch streaming as well as YouTube content creation.

This is according to stats from StreamsCharts, which you can view below. 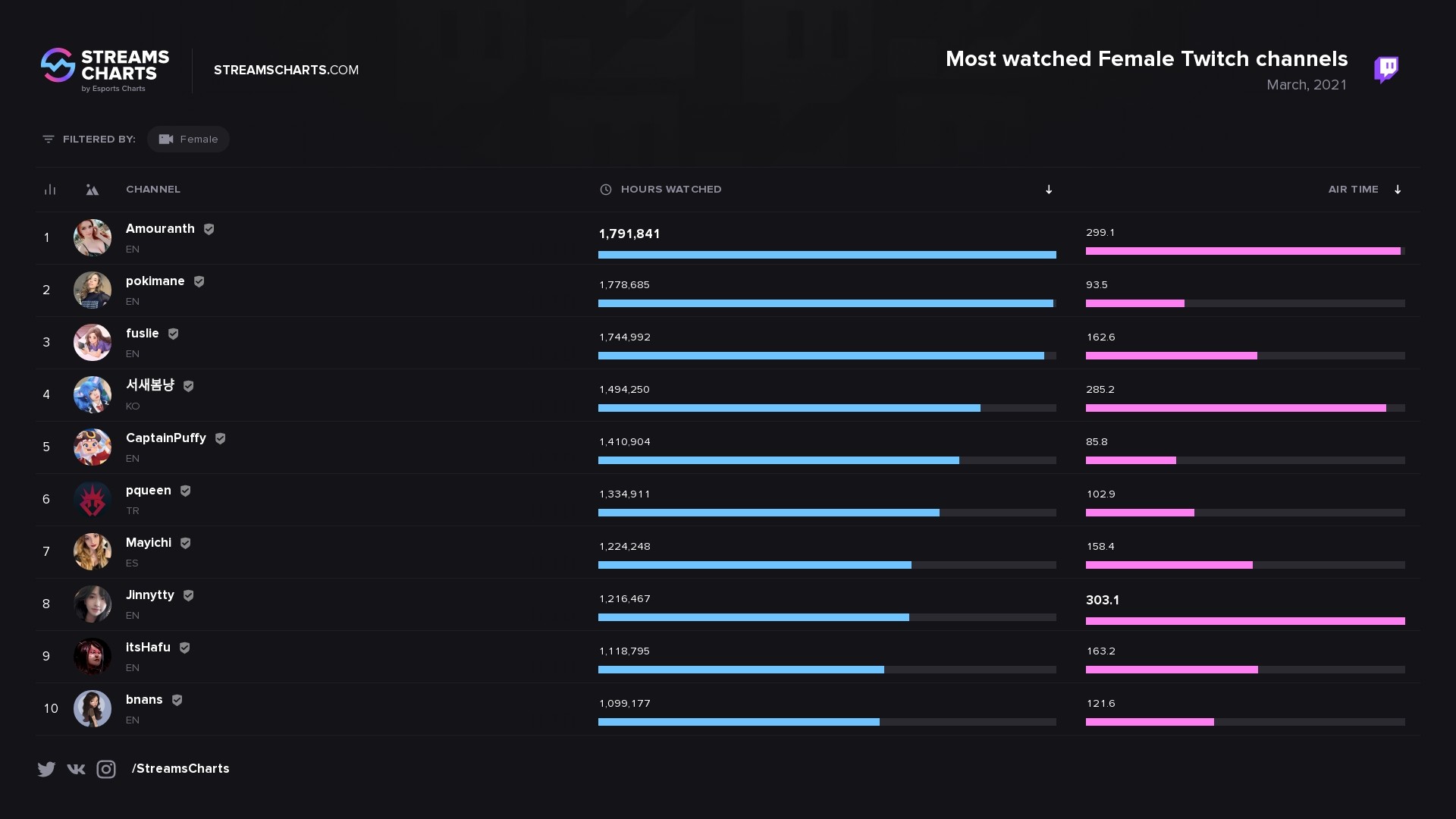 Amouranth put in a whole lot of work to achieve this feat, with 299 hours of broadcasts on Twitch, compared to Pokimane's 93 hours. Even so, this is an amazing achievement by Amouranth, and her Twitch channel continues to grow daily.

Probably one of the reasons Amouranth beat Pokimane as the top female Twitch streamer in March 2021 is the current Twitch Hot Tub meta.

Via Just Chatting on Twitch, Amouranth can be seen trying out new, tiny bikinis and other pieces of clothing, then getting into a hot tub and chatting to her fans. If you run into an Amouranth Hot Tub Twitch stream, you will see the content creator show off new outfits, and getting in and out of the hot tub multiple times.

Subscriptions and donations just keep pouring in as the stream progresses, while she writes stuff on her arms for those who've donated or subscribed.

This Twitch Hot Tub trend, or meta if you will, has seen Amouranth's viewership increase to new heights, and the sky's the limit on this one unless Twitch does something about it or the trend dies down on its own. Still, this is what many Amouranth fans expect from her in terms of content...

Amouranth has been banned three times on Twitch, with the last one on 12th May 2020 possibly due to the streamer showing a fan's profile picture which was deemed as inappropriate content.

Twitch almost never gives an exact reason for a ban, and as you can see from the image above, Amouranth hasn't been in too much hot water at all, unless you count her hot tub antics, of course.

Hopefully, you will now have a better idea of who Amouranth is, and which type of content you can expect from this extremely popular Twitch streamer, cosplayer and internet personality.