by Alejandro Sandoval
Learn which are the best characters for your party in Genshin Impact v1.5 before embarking on your adventure through Teyvat. Currently, with a total of 31 characters available in-game, with two more joining in Update 1.5, and one more discovered in the development of the v1.6, it can be difficult to know which is your best option once you want to embark on your journey to defeat Teyvat's biggest threats.

So in this article, we bring you a guide with the tier lists of each of the best characters according to their main weapon, which although some may be difficult to obtain due to their rarity, their effectiveness and usefulness in combat make them essential pieces for any team. 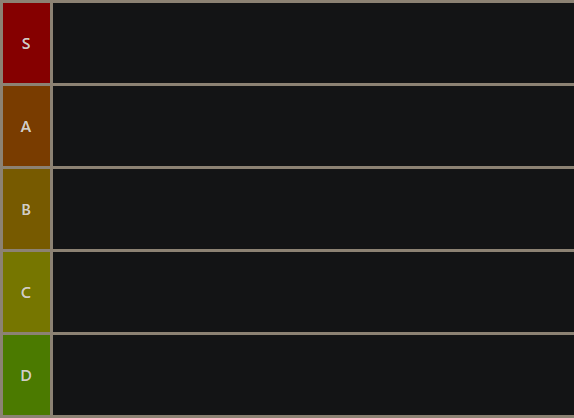 These tier lists will be divided into five levels, which we will describe below:

This comes without saying, but it's worth pointing out nonetheless, tier lists are not an exact science, especially in a game where most of your party preferences will depend on your luck or even your own likings, however, this will bring you a better point of view on how to build your team on the best way possible. 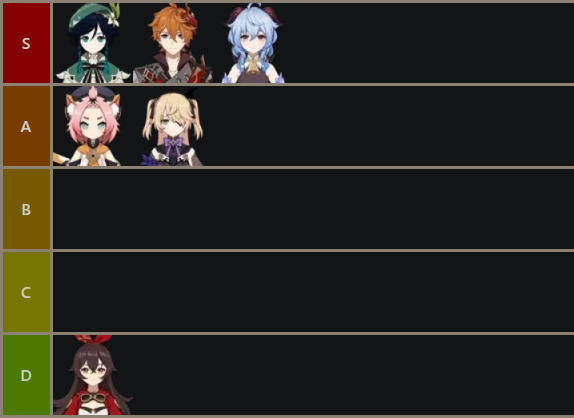 Thanks to his Elemental Burst, Venti has a lot of CC while his high energy recharge rate allows him to spam his abilities faster, Tartaglia has one of the biggest DPS thanks to all his arsenal, also having melee damage using his Hydro daggers, and Ganyu can create lots of skill combos that can deal with large mobs of enemies.

Diona can provide lots of shields and heals, while her Cryo abilities can easily freeze several enemies at once, Fischl can deal continuous Electro DMG thanks to her crow Oz, being useful for many Elemental reactions, and finally Amber is only useful for puzzles and exploration since her skills are pretty lame. 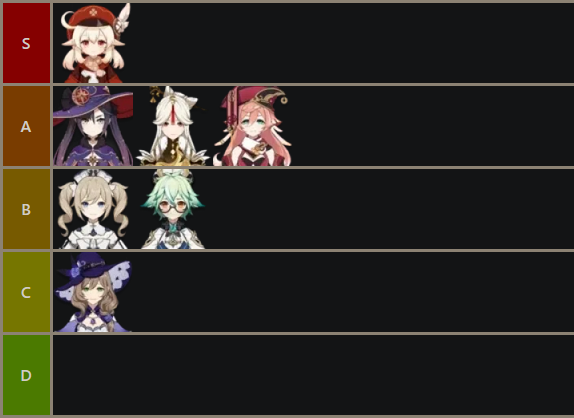 Thanks to her bombs and her high base attacks stats, Klee can become as strong as a supernova in battle, although her range can be a little tricky. Mona is one of the best Supports as she can immobilise several enemies at once, allowing for Cryo reactions, and her taunting Phantom can protect your other units.

Ningguang’s unique shield can help you shape the combat as it blocks projectiles and grants buffs, and her attacks can deal a lot of DMG to a single target. The latest addition, Yanfei, has a lot of strong Charged attacks with her Scarlet Seals that increase her damage potential, and Barbara is the healer by excellence, although she has the lowest base attack in the game.

Sucrose can launch enemies in the air with her Anemo skills, while her Burst is a little Venti-esque allowing her to make some good Elemental reactions. Lisa’s Electro skills are good for the first part of the game due to her high base attack, and just a little use compared to other Electro characters advancing in the story. 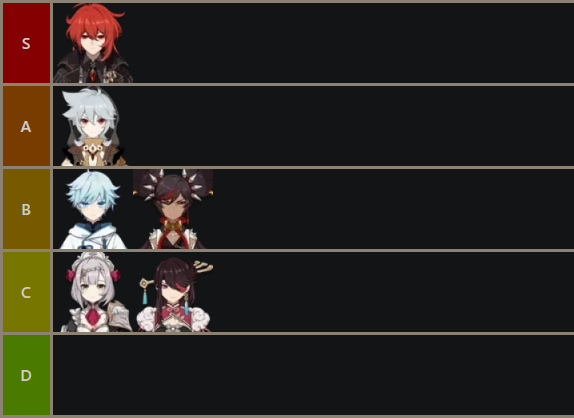 Diluc is without question the best DPS character in the game, with the highest base attack power and devastating Pyro abilities. The next best option is Razor, one of the best close-range combat characters thanks to his skills that increase his melee damage.

Chongyun’s Cryo abilities allow you to do lots of Elemental reactions that can immobilize and overcome any enemy if paired with a good Hydro character. Being the newest character in the Claymore club, Xinyan has the best base attack of all 4-stars, becoming a good option in case you don’t have Diluc on hand.

Noelle may be a little weak compared to others, however, her defensive stats and abilities make her one of the tankiest ones. Beidou is a character that depends too much on how you enhance her power, so unless you can have the resources to get her full potential, it will not be worth having her on your team. 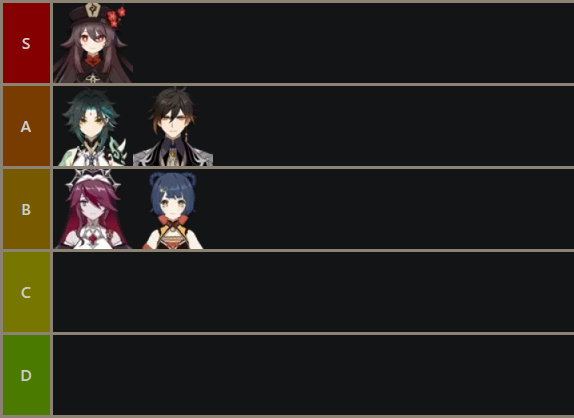 Hu Tao’s attacks can deal large amounts of Pyro DMG thanks to her Elemental skill, and combined with her Burst, she can become an OP high-damage dealer. Xiao is a character based on DPS, being capable of hitting multiple enemies at the same time and with his Burst, becomes a demon that can destroy anything on his path.

Zhongli’s Geo abilities make him one of the most wanted characters around the game, with big damage outputs and a lot of resilience in combat. Rosaria’s arsenal makes her a very useful character for her Cryo AoE reactions, and Xiangling can be a good alternative for a Pyro character thanks to her area skills and rapid attacks. 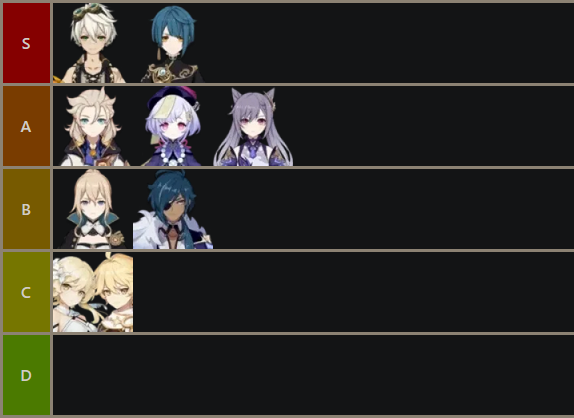 Although Bennett has not that impressive attack stats, his damage bonuses and healings as well as his good Elemental control makes him one of the best utility characters. Moving onto Xingqiu, his Elemental skills can provide DMG reduction as some great Elemental reactions, making him a fantastic Sub-DPS unit.

Albedo counts with skills that make him more viable to deal with hordes of enemies, while Qiqi has good attack stats as well as healing abilities tan affect your whole team, and Keqing has some of the best combinations in stats that along with her Electro power, makes her an amazing melee fighter.

Jean’s versatility as a Support and Sub-DPS is fantastic for your team, with CC abilities, and HP regen, although her damage power is a bit on the low, Kaeya is one of those characters that after the start of the main story, falls down against other Sword-user, and the Traveler attacks are not very damaging, but his/her ability to change Elements compensates it.

And that's all, with this we conclude our deep character tier list, while we hope it helps you to enjoy your journey through Teyvat to the fullest. You can check on more guides and news about Genshin Impact, through our section dedicated to this fantastic game.