Will Asmongold quit WoW? Compares MMO to "fat wife that you still love"

Wessel Minnie
Published: Jul 7th, 2021, 10:54
Asmongold has come out to put fans' worries about possibly quitting WoW to rest, sharing his love for Blizzard's MMO with a hilarious analogy. One True King (OTK) founding member Zack, known as Asmongold by his plethora of followers, is arguably one of, if not the most influential and biggest World of Warcraft content creators. While he does have some strong opinions on moves the developers make, and a Blizzard dev even called him an a#$hole recently, Asmongold has a love for the world...of Warcraft. Since Asmongold has been playing some Final Fantasy XIV Online recently, some fans have been wondering if Zack would ever quit WoW for good, moving onto a new MMO, or simply stream/play WoW less...

Asmongold's passion and love for WoW should be clear to just about everyone who has followed his Twitch streams in the past, with a prime example being fighting over a loot drop in TBC Classic.

Over the past weekend, however, Asmongold has been playing Final Fantasy XIV Online, streaming his gameplay instead of WoW, something fans have come to expect.

In a recent stream, Asmongold read a thread on Reddit where a fan asked others not to pressure him to play Final Fantasy XIV on his WoW stream.

Asmongold explained to fans that: "Even off-stream I’ll play WoW. It’s not something that I just wanted to do on stream for content or whatever. I do actually love WoW and I enjoy the game in a lot of ways."

Then, Asmongold continued by comparing his commitment to WoW to a scenario via a hilarious analogy, jokingly stating: "You play other games all day and then you come back and you play WoW. It’s like going to a strip club and, you know, you’re hanging out with all the 19-year-old strippers and then you come home to your fat wife that you still love, and that's retail WoW, it is."

The Twitch chat exploded with laughter, knowing full well this was a joke, and not to be taken seriously. Asmongold even said himself that this will probably cause another tweet about him... 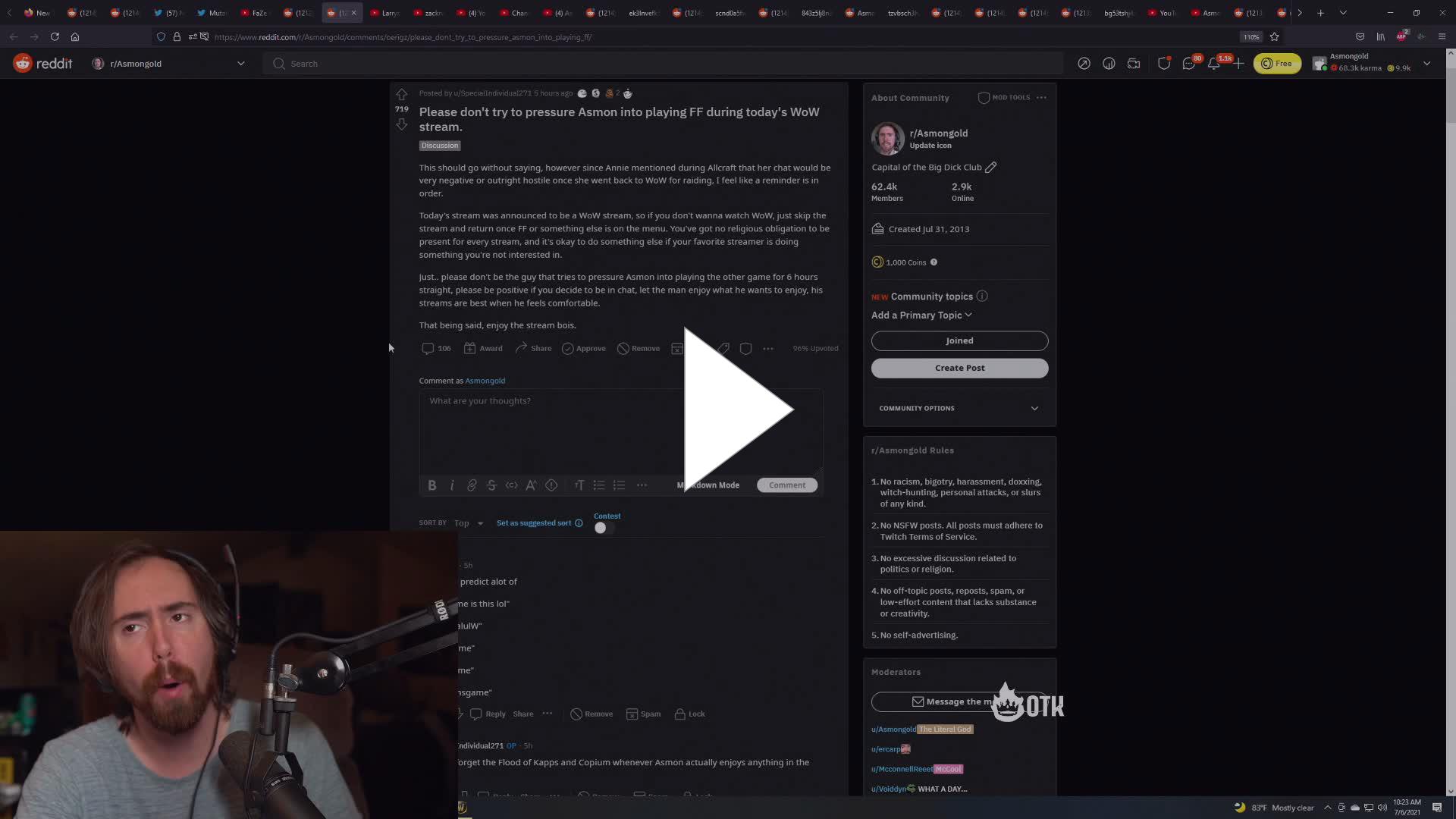 Asmongold finished off the topic by explaining: "The reality is I do live WoW. I care about WoW a lot… but it’s nice to do something different."

In short, despite Asmongold's strong opinions about World of Warcraft, and some justified complaining, the content creator still loves spending his time, both on and off camera, in Azeroth. Will Asmongold quit WoW one day? We simply don't know but don't be alarmed if he plays some other MMOs on stream from time to time.

Don't forget to check out our dedicated World of Warcraft section for news, guides, and much more. WoW Dragonflight Tangled Dreamweaver Mount: How To Get WoW Dragonflight: What Item Level is Vault of the Incarnates Loot?