by LJAYMURPHY
Atlanta FaZe takes out New York Subliners to win their second Call of Duty League major tournament of the year. The CDL Stage 3 Groups witnessed Atlanta FaZe, Toronto Ultra and New York Subliners assert themselves. With only two games being lost between all three teams throughout the groups, it was clear these were the teams to beat. Similarly to the group stages, the CDL Stage 3 Major played out with little upsets occurring. All three of the previously mentioned teams finished in the top three spots. James “Clayster” Eubanks and his New York Subliners knocked Atlanta FaZe into the losers final after coming out victorious 3-2 in the winners final.

Atlanta FaZe would then take on Toronto Ultra in the elimination final, which would prove no easy feat after the stage 2 major winners had taken out OpTic Chicago earlier on. After a back and forward match, it was the boys in red who avenged their major 2 final loss. The stage was now set for Clayster to take on his former Eunited World Championship winning teammates for a $200,000 prize. The concern before the series had been could New York Subliners persevere across a best of 9 series against the strongest team in the league. With having no players within the top 10 for KD entering the major, teamwork would be essential to land victory.

Paco “HyDra” Rusiewiez, who had been the top performer in the major in Hardpoint with a 1.3 KD, led his side to a 250-185 win on Garrison. Tiny terrors Chris “Simp” Lehr and Tyler “aBeZy” Pharris would then drop 12 kills each in S&D Checkmate to level the series.

The quality of Atlanta FaZe really started to show as both game three Control on Garrison, and game four Hardpoint on Moscow went their way with minimal resistance. New York Subliners would go on to win a convincing Miami S&D 6-3, but their backs were still against the wall. In Checkmate Control they had been 1.5 seconds away from levelling the series, but the player of the stage Alec “Arcitys” Sanderson slid onto the point and took out the final NYSL player Obaid "Asim" Asim.

S&D Raid would prove to be the final map of the series, and arguably the easiest of the weekend for Atlanta FaZe. They had won the map 6-1 and with that, they had claimed their second major tournament victory.

Check out the full CDL Stage 3 Major results below. 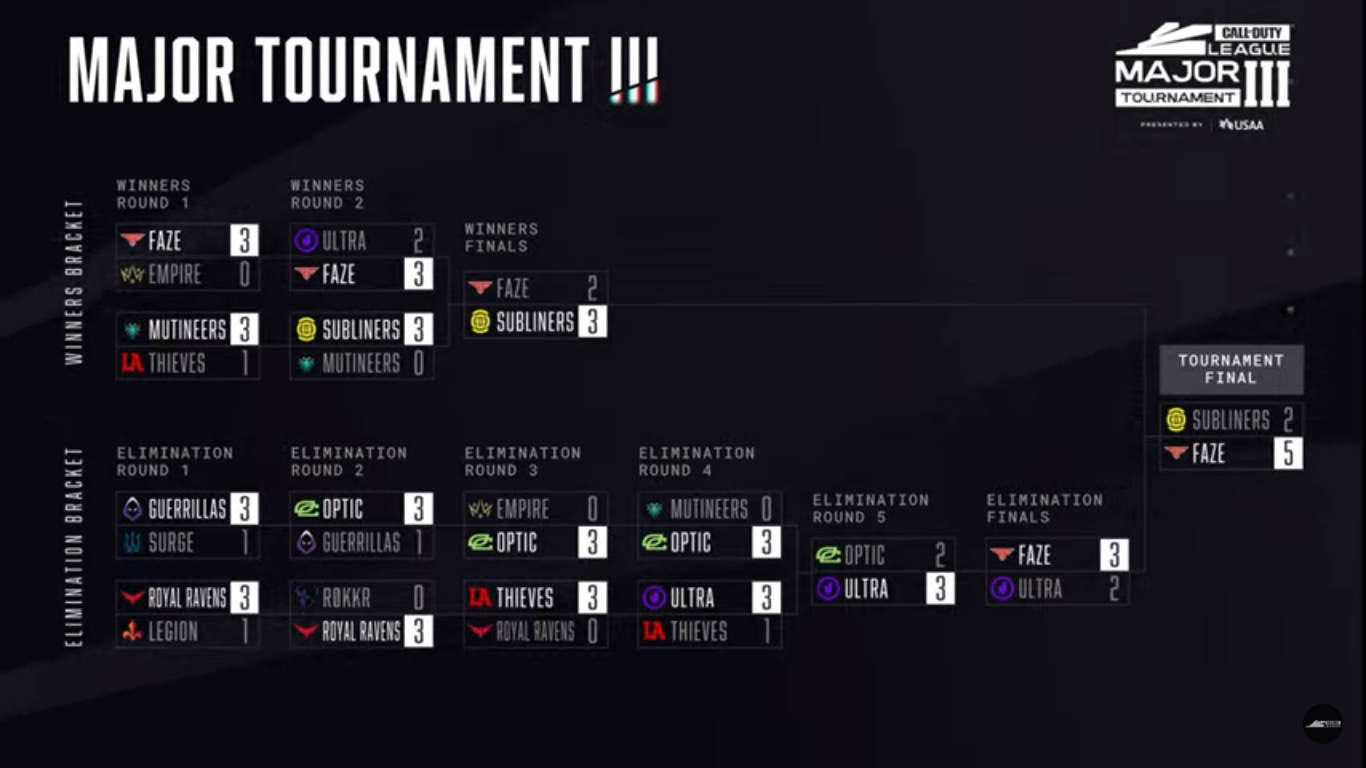 When is CDL Stage 4 starting?

Similar to other stage endings, there will be a week without any professional play in order for teams to have a break. Play will return on 27th May with the OpTic Chicago home series.

For more on everything Call of Duty, from tier lists to guides, news, esports and much more, check out our dedicated section.