by Andrés Aquino
CoD Mobile's newest season brings massive changes to the FPS with the addition of new modes, weapons, and maps. Published on August 16th, 2020
Call of Duty Mobile's Season 9, Conquest, is now live for all players, with a necessary 1GB download in order to access it, with more in-app downloads still required.

The highly-anticipated update has not disappointed fans, as many features and new updates come along with it. 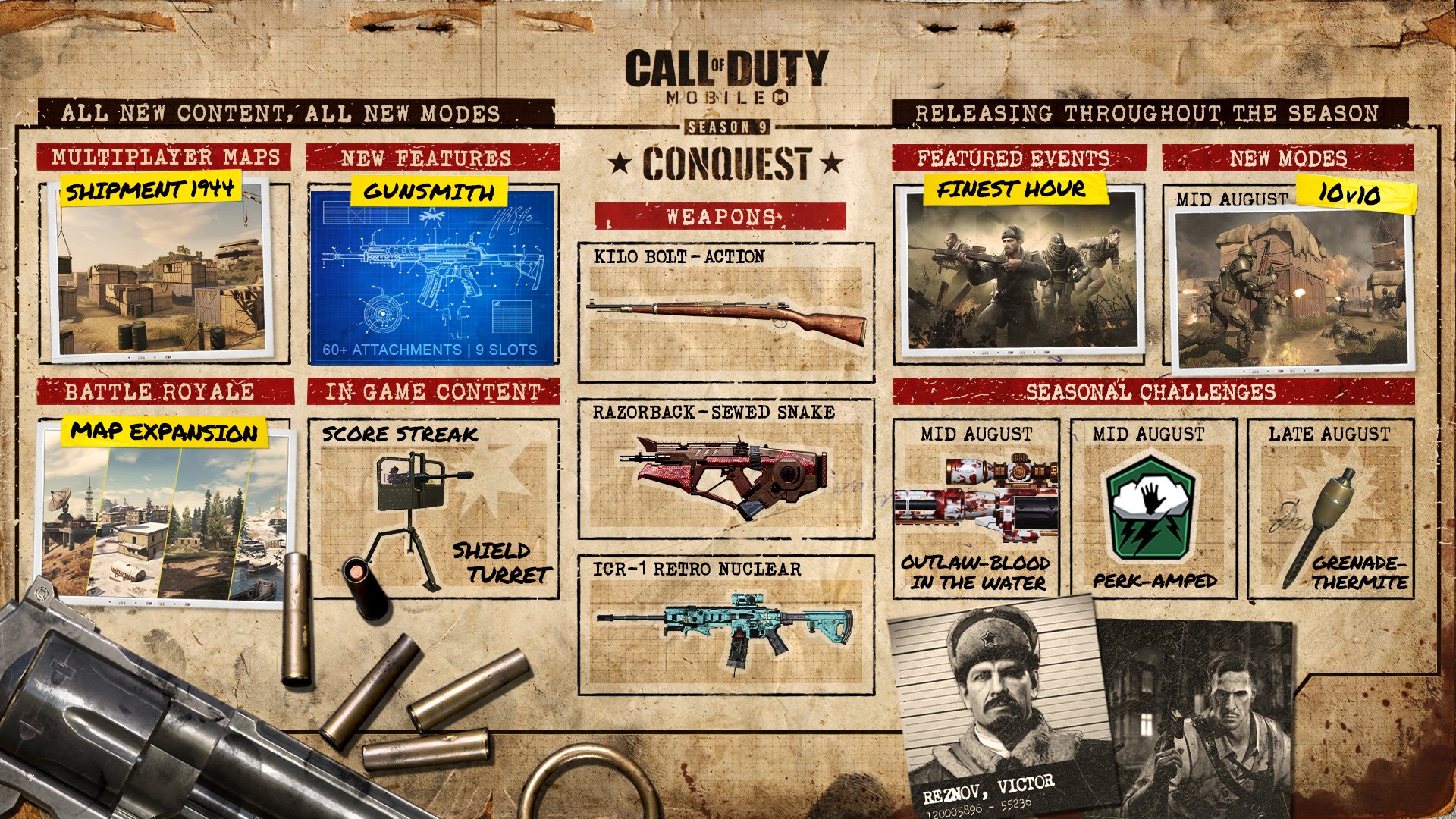 The classic Shipment 1944 map will bring World War II to COD Mobile, as the fan favourite makes its debut in yet another Call of Duty title starting with Season 9 of COD Mobile.

Also coming with Season 9 to COD Mobile is the Gunsmith feature. Customisation will look completely different moving forward, as players will have absolute control of the style and performance of all the weapons in their arsenal, all done in a new and improved user interface.

On top of the ability to combine different parts to adjust stats like range, accuracy, or damage, players can attach different cosmetic items such as charms, stickers, or reticles.

Conquest will also bring improvements to the COD Mobile BR map, as it will expand upon it adding four different areas for players to explore: Outpost, Dormitory, Radar Base, and Campground. Furthermore, a brand-new opening scene will welcome players when they're about to drop.

There's still plenty of yet to be released content within Season 9 of COD Mobile, including events, modes, and extra challenges, so be sure to keep an eye out for all the updates set to be unveiled these next coming weeks. Down below are the full detailed patch notes.

Players can choose from more than a hundred attachments to customize their weapons! Update your favorite weapon with new visual and functional upgrades for a completely unique experience.

With the new Gunsmith system, all weapons in Battle Royale now perform the same as their Multiplayer versions. Players can modify and customize their weapon in Battle Royale loadout and acquire them from airdrops. Look for brand new weapons on the battlefield with various styles and attachments.

Players can unlock most weapons, perks, Operator skills and Sorestreaks before level 55.

ICR-1, Cordite, HVK30, GKS, KN-44, Locus, Pharo, KRM262, HBRa3, Man-O-War and Razorback are now player level rewards. Other base weapons can be unlocked by completing challenges in Gunsmith system or within the free Battle Pass

The update is set to make its way to mobile devices starting on 16th August at 5 pm PST (8 pm EST, 1 am BST). Be sure to check regularly to know when your device has the option to start downloading the update.